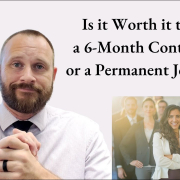 Is it worth it to take a six-month contract position, or is it better to wait for a full-time position? Let’s talk about the employment status first and then what needs to be in the independent contractor agreement to make that decision.

So, there are two types of employment relationships. You’re either an employee or an independent contractor. With this question, we’re talking about people who are doing contract work as independent contractors, and that could be a variety of things. It could be for a specific task, or it could be for a company that needs a little short-term help with something, but you are not an employee, meaning you won’t receive a W2 at the end of the year.

Taxes aren’t taken out of your compensation, and you most likely won’t be getting any benefits. Now, it’s possible you could be a short-term employee, but for this specific question, I’m just going to look at it from the perspective of being an independent contractor. So, before you start any job or contract position, it’s very likely you will have to have signed an independent contractor agreement. And in that agreement, it’s going to state how the contract can be terminated. So, when you’re trying to decide whether it is better to take the short-term assignment or wait for a permanent assignment, you need to see what your termination options are after you start the job. For instance, almost any contract is going to have some way of terminating the agreement with a certain amount of notice to the other party.

Now, when it’s a short-term, six-month assignment, for instance, and it has maybe a 60 or 90-day without-cause notice, well, that needs to be considered. So, even if you were to start, if you give 90 days’ notice, you still have to work there for three months, and then, depending upon whether you got a full-time offer or not from somewhere else, that’s what should go into whether to take the short-term position or not. Are you stuck for those six months? Meaning you cannot get out of the agreement without some for-cause reason, meaning they have violated or breached the agreement in some way. And then you can terminate the contract immediately, and there will be language in there about that as well. But if you start the position and it states it cannot be terminated except for-cause reasons, well, then you’re stuck in that position for six months, no matter what. And if a full-time position becomes available during that time, you’re stuck.

So, that’s the first thing you need to think about. Am I in it for six months, no matter what, or do I have some options to get out of it? Because if you can get out of it with a certain amount of notice, then there’s really no harm in taking that job. No job is going to say if you can’t start within the next 10 days, it’s gone. I mean, it’s very unlikely, at least for a permanent position. If you are the right person for a job, a company will absolutely be willing to wait 30 days, most likely for you to get out of your contract. Now, if you said not to wait 90 days, well, they might move on. So, if you can negotiate the without-cause termination notice down, then you absolutely need to do that. Now, another consideration is sometimes there’ll be a penalty associated with terminating the contract early.

For instance, if you were given a signing bonus and relocation expenses, most of these are probably remote, so that’s not going to be a part of it. Maybe if they paid for some licensing dues and fees, certifications, whatever, you may have to pay some of those back. So, that’s another consideration. What are my repayment requirements if I terminate the contract early if I get a permanent position offer while I’ve started this contract position? So, in summary, should you take a six-month contract versus waiting for a full-time job? It really depends on how quickly you can get out of the contract after you’ve signed and then what you’re going to have to pay back to the employer or organization that you’re working for as an independent contractor.

What is a Full-Time Contract Position?

Now, if you are a full-time or in a full-time contract position, the only thing that really differentiates you from someone else is they have employees that are paid as W2 employees. At the end of the year, they’ll receive a W2 which shows all the compensation that they received and then all the taxes that were taken out. Whereas if you’re in a full-time contract position, you’re classified as an independent contractor, and then at the end of the year, you’re going to receive a 1099. And as a contractor, no taxes will be taken out of any of the compensation that you received. So, at the end of the year when you file your taxes, you are responsible for paying the state and federal taxes associated with any compensation that you received. Many times, if someone is acting in a contract position or as an independent contractor which is really the same thing effectively, they can’t transition into a full-time permanent position.

Benefits of both Full-Time Contract Position and Regular Position

But in that scenario, it’s extremely likely that you’ll then transition from an independent contractor into an employee, as I said before, where you received the W2. What are the benefits of both? Well, in a contract position, at least if you’re doing part-time work, you can work for whomever you want, whenever you want, and your schedule is completely up to you. Whereas if you’re working in a full-time contract position, you’re going to sign an independent contractor agreement of some sort. And then in that agreement, it’s going to state what the expectations are as far as your time commitment to the organization you’re working with. And so, many of those agreements will state you can’t have outside employment without written approval from the organization you’re working with. The entire point of being an independent contractor is for it to be quick in, quick out, and can work for multiple people at the same time.

Whereas as an employee, especially as a professional, there’s almost always either exclusivity or outside activities provision, which would then prevent the professional from working in multiple locations or for multiple organizations at the same time without written approval from the employer. So, keep that in mind. One of the main differences between being an employee versus a contractor is just that you’re going to have some restrictions based on who you can work for and when you can work. Now, one other consideration as an employee and a contractor, especially as a full-time contract position, is that there very likely will be restrictive covenants in whatever agreement that you signed. Restrictive covenants prohibit the independent contractor from doing certain activities during or after the contract ends. The most common restrictive covenants are non-compete, non-solicit, and non-disparagement. For most people, the non-compete is the most important part.

And yes, you can have a non-competition clause in an independent contractor agreement.  There are a few states where non-competes are completely unenforceable. So, I would check with whatever state you’re in that makes certain that you’re not in one of those states. And even if you did sign a non-compete in one of those states, it’s very likely it would be unenforceable. However, most states do have some enforceable non-compete either through their case law or in their administrative code or statutes, or regulations. It’s called different things in different states, so be very careful about how it’s worded. I find that for some of the healthcare professions, it’s much more limited, whereas if you’re in sales it could be very broad, meaning they want to knock you out from the entire state of doing things for similar employers.

What you want to do for any non-compete is get it as specific as possible, meaning the scope of it should be the specific thing that you’re doing for that organization. So, if you are in software sales as an independent contractor, then it needs to say you can’t work in software sales, not any sales. Or if you’re in a full-time contract position doing IT work or doing graphic design or whatever it is, it needs to say specifically what you’re doing for that employer. That way you have some options to do some other things after the contract or agreement ends. So, that’s what it means to be a full-time or in a full-time contract position.

W2 Contract (What Does it Mean to Work as an EMPLOYEE?)

Are There Any Nursing Jobs Where You Can Smoke Marijuana Without Getting Re...
Scroll to top