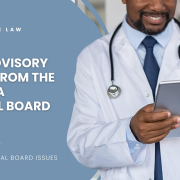 Are Advisory Letters in the Public Records?

Now, the benefit of an advisory letter. While it is subject to a public records request, the medical board’s website won’t report it in their recent actions. In addition, it is not reported to the national practitioner data bank as a disciplinary action.

Another thing to keep in mind about the publicity of advisory letters is that neither the national practitioner data bank nor the medical board website reports them. The Arizona State Board then holds open meetings to discuss the issues under investigation, which are brought before the board for a vote on a resolution.

The Arizona medical board’s meetings are subject to open meeting laws. Just like every other regulatory board here in this state. Everything discussed in the board meeting schedule, except for confidential matters in the executive session, is available to the public. So let’s say a letter of advice is used to resolve your case. In that case, they will probably talk about it at the public medical board meeting of the Arizona board. Additionally, the agenda and those minutes are available on the board’s website.

But again, that is something that you must know where to look to find those minutes. So, as a general matter, the number of places that the public can find an advisory letter is limited. Particularly compared to the reporting of disciplinary action against the physician’s license.

Should you have any additional questions about this topic. Or should you find yourself under investigation by the board, please do not hesitate to give us a call.

What is a Summary Suspension by the Arizona Medical Board?

What is a summary suspension for a physician licensed with the Arizona Medical Board? And what does that process look like? And what can a physician expect if they find themselves in a proceeding to suspend their license summarily?

Medical Board Actions To Protect Public Health, Safety, and Welfare

A summary suspension is an emergency action the Arizona Medical Board takes. If they believe that the public health, safety, and welfare imperatively require emergency action against a physician’s license. The board does this to restrict all or some of their practice. So, this is an action the board takes before the allegations of unprofessional conduct are fully investigated. The physician has had an opportunity for a formal interview or hearing on the allegations.

If the board staff receives a complaint with serious allegations. If they’re concerned about the physician’s ability to practice then, they can offer an interim practice restriction. To prohibit or limit some of that physician’s practice activities while they gather more information about the allegations.

Say a physician refuses to sign an interim practice restriction offered by board staff during the investigation. The board staff’s recourse at that point is to proceed with a summary suspension of the physician’s license. Which again is asking the board to suspend and restrict the physician’s ability to practice pending a formal administrative hearing into the allegations.

If the board votes to summarily suspend a physician’s license and finds that emergency action is required to protect the public’s health, safety, and welfare. The physician has a right by statute to have an administrative hearing held on the allegations. And within 60 days of the summary suspension. At that point, should the board vote to summarily suspend the physician’s license, they would refer the matter to the office of administrative hearings for a full evidentiary hearing.

By statute, that hearing must be held within 60 days of the summary suspension by the board. Should you find yourself under investigation by the Arizona Medical Board. Or in the process of summary suspension proceedings or a subsequent formal hearing after you’ve been summarily suspended. Please do not hesitate to contact our firm if you need advice or assistance.

Can a Physician Request a Hearing with the Arizona Medical Board?

I wanted to briefly discuss today the formal hearing process after the conclusion of a medical board investigation. What does that mean? What are your options regarding requesting a formal hearing? After an investigation by medical board staff into allegations of unprofessional conduct, board staff will reach out to the physician. And let them know that the matter has closed.

Of course, it can also offer non-disciplinary outcomes at the end of an investigation. It could be an advisory letter or perhaps a full dismissal of the matter. Still, those are not outcomes that would trigger the physician’s right to proceed to a formal hearing. So, suppose they present the physician with an option to sign a disciplinary consent agreement. In that case, there will also be the option and the consent agreement to appear before the Arizona medical board. It’s called a formal interview. In place of a formal interview, the physician can ask that board staff refer the case to the OAH. Or Office of Administrative Hearings for a formal evidentiary hearing on the allegations.

If a physician opts to appear before the Board for a formal interview, it’s a truncated approach to resolving the matter. And it’s shortened. It can result in a similar consent agreement that the Board offered initially. It could always result in a better outcome for the physician, but it could also result in a worse outcome.

The Doctor Can Respond to Allegations in Writing

Suppose the physician declines the formal interview, they decline to sign the consent agreement. They opt to have their matter referred to OAH instead. They assign the case to one of the Board’s litigation councils. Then they will then proceed with drafting and serving a complaint and notice of hearing. Informing the physician of formal allegations that everyone will hear at the hearing. And its date and time. They will allow the physician to respond to the allegations in writing. With the option of a formal hearing, our statutes here in Arizona also enable a physician to elect to participate. They can partake in an informal settlement conference with board staff and their attorney before attending the hearings.

Arizona Board Attorneys that Can Help

So, suppose the physician does elect to pursue a formal hearing as an option in their case. In that case, they can also ask that board staff and attorneys hold an informal settlement conference. That is to resolve the matter instead of going forward with that formal hearing.

If you are a physician here in Arizona, you’re under investigation by the Arizona medical board. The investigation has concluded. And now, you must decide which option to choose and how that may affect your license and practice. If this is you and you need more information and guidance moving forward, please feel free to contact our firm.

Is a Letter of Reprimand from the Arizona Medical Board Public?

What is a letter of reprimand from the Arizona Medical Board, and is it a public document? What does that mean? And what is it? And what can you expect if that is something the board issues to resolve an outstanding investigation with the board? Upon receipt of an unprofessional conduct complaint, the board will investigate those allegations against the physician’s license. In other words, they may collect additional evidence and interview witnesses. And determine whether there is enough veracity to the allegations to warrant some disciplinary action against the physician’s license.

It is Still a Disciplinary Action

Now, they could issue a letter of reprimand without a term of probation. That’s also an option, but again, even standalone, a letter of reprimand is still considered to be disciplinary action. A disciplinary action, the reason that it is significant and differs from a non-disciplinary action is that it is reportable. Not only on the board’s website but also the National Practitioner Data Bank. Since the Arizona Medical Board must report certain adverse actions against its physician’s licenses to the National Practitioner Data Bank.

So, a letter of reprimand is public. According to the statute, they will post it for up to five years on the Arizona Regulatory Board website. In addition, it will also be reported to the National Practitioner Data Bank. A report which certain employers can pull, healthcare organizations, et cetera.

Suppose you are in the middle of an investigation with the Arizona Medical Board. Or if they’ve issued you or offered a letter of reprimand to resolve the case. Please do not hesitate to contact us. Especially if you need more information about what that means. And professional opinion on how it can affect your practice and your license.

Can a Physician Request a Hearing with the Arizona Medical Board? | Hearing...

What Criminal Charges Should a Physician Report to the Arizona Medical Boar...
Scroll to top