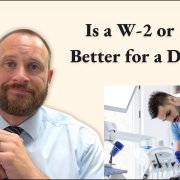 Is a W2 or 1099 better for a dentist or dental associate? I would say it depends. Just kind of explaining the difference between the two. If you have an independent contractor agreement, then you’ll be a 1099 employee, meaning, you’ll receive a 1099 at the end of the year from the employer where I guess whoever you had the relationship with. and then a W2 is just a salaried employee. And so, you’ll have an employment agreement if you’re a W2. Independent contractor agreement if you’re 1099. The difference between the two is in the employment agreement, the dentist is going to benefit from benefits, meaning literal benefits like health, vision, dental, life, disability, retirement, kind of the normal things you get in a normal job.

They’ll also likely pay for your licensing board, DEA registration, continuing education, and maybe associations in societies. They’re going to financially support the dentist with those ancillary benefits. And then they’ll obviously have compensation, straight base salary. A lot of dental associates have daily rates or perhaps it could be a hybrid of a base salary, plus the dental associate will get net collections. Many times, they’ll have like a smaller, you can almost call it a draw, or the dentist could get paid a certain amount each month, and then they’ll get a percentage of any services collected based upon what they did. Normally in that scenario, it always depends, but usually, if it’s a hybrid, it’ll be somewhere between maybe 18 to 25% percent of the net collections over a certain amount. That’s not uncommon.

That’s what an employment agreement and kind of the W2 relationship is for dentists. Now, in independent contractor agreement, generally, you’re not an employee and you’re not going to receive the employment benefits of such. They may pay for your malpractice insurance, but unlikely they’re not going to pay for your licensing, DEA, they’re not going to provide any actual benefits. So, all of that is going to be on the dentist. And then as far as taxes go, federal or state taxes will be taken out of whatever you’re getting paid. I guess the theoretical benefit of an independent contractor agreement is it should be easy in, easy out.  The notice requirements should be much less than in an employment agreement. There shouldn’t be a lot of strings attached. Hopefully, there’s no non-compete, but in practice, I don’t find that’s the case. Other blogs of interest include:

I mean, like all the obvious things that if a dentist was working for somebody that they’re going to be provided. Now, it also gets into the benefits and the comp relationship and all that kind of stuff. I think, for the most part, if you’re full-time, an employment agreement is obviously the way to go. If it’s very kind of hit or miss part-time, fill-in, an independent contractor agreement would make sense. But if this is the only job, you work five days a week, an independent contractor agreement, in my opinion, doesn’t make a lot of sense. You’re going to lose out on all those benefits. And usually, you’re going to get all the downsides of the restrictive covenants too. So, a non-solicit, non-compete, maybe depend upon what type of liability insurance you have, if you must purchase tail insurance, that’s on you as well. Just a lot of things to think about.

What Should be in a Termination Agreement Letter?

What Happens When a Nurse is Reported to the Board?
Scroll to top