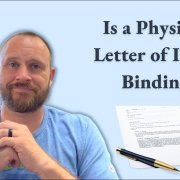 So, it’s always important for the physician to know, even if you come to terms on the letter of intent like compensation, benefits, bonuses, termination notice, non-compete, even if all of those things have kind of come to an agreement on if you get the employment agreement and it is different, either just the terms are substantially different or perhaps the way that they worded it made it substantially different, in that scenario, obviously, don’t sign the employment agreement. You can always negotiate, even after you sign a letter of intent due to those factors. Maybe in the letter of intent, it states yes, there is a non-compete that lasts one year, but then it doesn’t list the geographic limitation. You get the contract, and it says, oh, it’s a one-year non-compete. Okay, great. And then it says, but it’s 50 miles from every location that the employer has in the state or something crazy like that.

Well, no physician is going to sign, or at least they shouldn’t, a non-compete like that. Although at first glance, the letter of intent is, okay, well, this is a one-year non-compete. That seems fair. But when you get into the details of it, it’s not so fair anymore. Or perhaps there’s language about productivity. In this case, maybe it’s like you get 25% of net collections over a certain amount that you collect in a month. Okay, well, that sounds great. Other blogs of interest include:

And then you talked to the employer about the volume, meaning, alright, well, what’s an average a physician makes in my specialty here? And they say, oh, well, no one’s ever got the productivity bonus before. Okay, then that looks great on 11, 10 but in practice, not so great. Or maybe in the term of the agreement, they say it’s a one-year initial term. But then when you investigate the language of the agreement, it just automatically renews, and there’s no ability to terminate the contract without cause. Then the physician theoretically could just be stuck in loop without the ability to get out of the contract. That’s just something that must be worked out in advance. So, is a letter of intent binding for a physician? Normally, no, it’s not.

And if there is a language that states it is binding, run the other way and get a new job that isn’t trying to take advantage of you. It’s rare that someone would put language in there without understanding what they were doing. Most business owners are at least savvy enough to understand that forcing someone to sign a binding letter of intent without seeing the actual employment contract is bad. So, anyway, just keep that in mind before you sign anything.

Easiest Way For a Nurse to be Suspected of Diverting Narcotics

What is a Draw in a Dental Contract?
Scroll to top