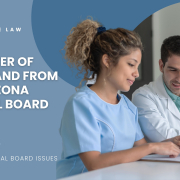 It is Still a Disciplinary Action

So, a letter of reprimand is public. According to the statute, they will post it for up to five years on the Arizona Regulatory Board website. In addition, it will also be reported to the National Practitioner Data Bank. A report which certain employers can pull, healthcare organizations, et cetera.

Suppose you are in the middle of an investigation with the Arizona Medical Board. Or if they’ve issued you or offered a letter of reprimand to resolve the case. Please do not hesitate to contact us. Especially if you need more information about what that means and how it can affect your practice and your license.

How Long Does an Arizona Medical Board Investigation Take?

What can a physician expect when someone files a complaint against their license with the Arizona Medical Board? And how long does it typically take for that complaint process to resolve? Unfortunately, like with many things in the law, the answer is it depends. There are a variety of factors that can affect the length of the investigation. For example, if there are several complaints against the physician, the allegations are of substance abuse or sexual. And the Board feels that they need additional information in the form of an evaluation. That can certainly prolong the course of the investigation while the physician undergoes some evaluation.

If the Physician Accepts the Consent Agreement

In addition, if the case is resolved and the Board offers the physician a consent agreement to resolve the matter. Or a non-disciplinary outcome such as a dismissal or an advisory letter. That could shorten the process if the physician, for example, chooses to accept the consent agreement or the advisory letter. And, of course, accept the dismissal as the case’s outcome.

However, suppose the board staff concludes its investigation into the matter and perhaps offers the physician a disciplinary consent agreement. In that case, the physician can reject that consent agreement and proceed to a formal interview before the Board. Or ask that the board staff refer the matter to the office of administrative hearings for a formal hearing. If the physician chooses to proceed with a formal interview or hearing. This can delay the resolution of the process because that takes more time. Typically, the Arizona medical board sends out letters to the physicians at the beginning of an investigation. They indicate that the complaint investigation process normally takes about six months.

In our experience, we find that the investigations typically take closer to a year. So, suppose you are under investigation, or you receive a notification of a complaint against you. In that case, it’s essential to manage your expectations. And know that it could be several months and over a year before the matter fully resolves. Also, again, that timeline can vary based on many of the factors I have discussed today. Suppose you are a physician and have found yourself under investigation by the Arizona medical board. If you feel like you need additional information or us to help guide you through the process. Please do not hesitate to reach out.

Is an Advisory Letter from the Arizona Medical Board Public?

The Benefit of an Advisory Letter

Now, the benefit of an advisory letter. While it is subject to a public records request, the medical board’s website won’t report it in their recent actions. In addition, it is not reported to the national practitioner data bank as a disciplinary action.

Another thing to keep in mind about the publicity of advisory letters is that neither the national practitioner data bank nor the medical board website reports them. The Arizona State Board then holds open meetings to discuss the issues under investigation, which are brought before the board for a vote on a resolution.

And again, just like every other regulatory board here in this state, the Arizona medical board’s meetings are subject to open meeting laws. This means everything discussed in the meeting except for confidential matters in the executive session is available to the public. So, your case is resolved by an advisory letter or with an advisory letter, and the Arizona medical board will likely discuss it at a public meeting. The agenda’s information and minutes are also available on the board’s website.

But again, that is something that you must know where to look to find those minutes. So, as a general matter, the number of places that the public can find an advisory letter is limited. Particularly compared to the reporting of disciplinary action against the physician’s license.

Should you have any additional questions about this topic. Or should you find yourself under investigation by the board, please do not hesitate to give us a call.

Should an Arizona Physician Ever Surrender Their License?

When Is Discipline From the Arizona Medical Board Removed From the NPDB? | NPDB...
Scroll to top