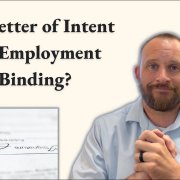 Is a letter of intent for employment binding? The short answer is probably not. Kind of how the process would work is when a professional is looking for a new position, the employer may state, before we give you an employment contract, we’d like you to sign a letter of intent, also referred to as an offer letter. And then in that letter of intent, it’s going to outline the main points of the employment relationship. Normally, in a letter of intent, you’d have the term of the contract. So, how long does it last, maybe how it can be terminated, if it has without cause termination, what’s the length of notice needed. Certainly, it’s going to have compensation details like base salary, productivity bonuses, commission percentage, that will be listed as well.

Maybe a brief description of the benefits. And then if there’s a non-compete involved if it’s a healthcare contract, maybe some details about the malpractice insurance. Kind of quick bullet points of, alright, this is what we expect the employment relationship is going to be. And at that point, there may be some negotiation between the professional and the employer. For instance, if the professional wants a higher base salary or a higher percentage of collections, or whatever it is, that’s the time to negotiate. And then once an agreement has been reached, then the professional signs the offer letter, generally, the company will as well. And then at that point, the company will usually prepare an actual employment agreement with the binding terms. What are some reasons why someone would back out after signing an offer letter?

Well, the details in a contract can significantly change when they’re provided with more context. For instance, if the offer letter states, let’s talk about the non-compete, it may state, oh, it’s two years and 10 miles from your primary practice location, or in sales, from your sales territory, something like that. And then when you investigate the agreement, it may be much more prohibitive in the fact that you can’t, not only work in your specialty, but you can’t work at all in sales in this area. Obviously, if you’re selling software or something like that, then normally, non-competes would apply only to software. So, you could switch industries for a brief period and then come back if you wanted to. Other blogs of interest include:

However, if the language just says you can’t work in sales in this period within a 10 miles radius or something, well, that could substantially change the job. Or perhaps, if there is some kind of commission-based bonuses, it may state, if the contract is terminated, the professional won’t receive any of those bonuses if they haven’t been paid out. And so, someone could work for an entire year, earn bonuses, and then maybe leave in month 10 of the year, something like that. They get nothing as far as bonuses go. These are a few reasons why someone would be okay with an offer letter and then maybe not okay with the employment agreement. Unless the offer letter has specific language stating, this is a binding document in some way, it is not binding upon the professional.

It is exceedingly rare to see an offer letter with that type of language. Generally, it’s just, here are the basic terms of the employment, and then it moves forward to an employment agreement. Until the professional signs the employment agreement, it’s still mostly a handshake. Other times, if someone is given an offer letter and then they find a new position that’s better and pays more, whatever, then they’ll say, alright, well, I’m not going to entertain this job anymore. I’m going to move out. In that scenario, if someone wanted to back out after signing an offer letter, then you just need to cordially say, this isn’t going to work out for me. I’m going to pursue a different opportunity, appreciate the consideration and just move on. You don’t need to give any explanation if you don’t want to, as far as why you’re doing that.

An offer letter or a letter of intent, generally, is not binding and the professional is free to continue looking. Now, the last consideration is, obviously, some bad blood may pop up after someone pulls out after signing an offer letter. As I said before, try to be professional and cordial about letting them know that you’re not going to move forward with that employment agreement. However, this is business, and most businesses understand in a competitive job environment that people change their minds at times. And so, I wouldn’t be that concerned about that. But it may happen, so you want to avoid burning bridges if possible.

How is Physician Productivity Calculated?

How a Nurse Should Handle an Employer Investigation
Scroll to top