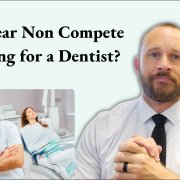 Let’s just say your non-compete is for one year and then 15 miles from your primary practice location. For the most part, that would be considered a reasonable non-compete. Non-compete laws do vary from state to state. It’s one of the only things in employment contracts for dentists that kind of varies from state to state. There are some states that absolutely prohibit, meaning, it’s illegal to have non-compete for a healthcare provider in that state. There’s only a handful of those. Most states do acknowledge non-compete if they’re reasonable. Is a two-year non-compete reasonable? I would say no, ideally, it would be one year and no more than that. However, there are plenty of places that try to push it to two. In a scenario where they’re offering two or even beyond, you need to push back and say, I don’t want to sign more than a one-year non-compete.

And then two other things you need to think about as far as the non-compete. First, the location listed. As you know, big conglomerates are gobbling up these dentist-owned practices. And so, you could be in a city where there are eight locations for your employer. You want to make sure that it specifically says your location or maybe the two locations where you spend most of your time. You don’t want to sign a non-compete that states that it attaches to every single location owned by the employer, even if you never worked in those locations at all. This is especially true for dentistry. Other blogs of interest include:

If you’re in private practice, dentist-owned, and they only have one location, then it’s simple. It’s just going to be that location and nowhere else. But, if you’re in a big city and they own a bunch of locations, you want to make sure it specifically states your location, not all the locations. And then also, if you’re in a specialty, you don’t want to get stuck from not being able to do any kind of dentistry. You want it to say specifically what you’re doing for that employer, that way if you can do other things for the period like let’s say you just can’t move because of kids or family reasons, you could have an alternative for a year. That might not be ideal, but you could do that for a year and then come back to your normal specialty.

And so, you want to make it specifically not like all practice dentistry, but your specific focus as well. Non-competes are just a part of almost any employment contract. I’m not sure why most people think they’re just completely unenforceable. I get that a lot. Well, my colleague said that I can sign it, but it can’t be enforced anyway. That’s just not true. If it’s not in one of the states where it’s prohibited, it likely will be enforced if it’s reasonable. Now, if someone’s giving you a five-year non-compete that knocks you out of an entire state, clearly not going to be enforced, but you may have to litigate or go to arbitration if you’re going to fight that, or the employer is as well. This is certainly something you can negotiate. Most employers are going to say to you, well, we just can’t, we’re unable to change that, or no, I’m sorry, we can’t do that. There’s a difference between they don’t want to do it and they can’t do it.

It would depend upon how much leverage the dentist has. Are you coming into a job opportunity that’s difficult to recruit to, or maybe in an undesirable location or maybe not as desirable for the general population? You have more leverage if you’re going into a big city and there’s a ton of applicants for a job and someone else doesn’t care at all about the non-compete. Well, then you have a decision to make whether you’re willing to accept it or not. If you have non-competes that are 50 miles from your location or even will knock out like contiguous counties, that’s something I would try to avoid. You really shouldn’t have more than 10 to 15 miles from your primary location. Or as I said before, maybe you split your time in those two locations. So, that’s a little primer on non-competes for dentists.

What is Claims Made Insurance for a Dentist?
Scroll to top