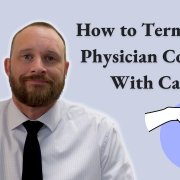 How can a physician can terminate a contract with cause?  First, let’s talk about what is with cause and without cause. Without cause means a physician or employer can terminate a contract for any reason with a certain amount of notice, generally, it’s 60 to 90 days. Anything above that would be kind of a red flag to me, but without cause just means either party can get out of the agreement for any reason and with a certain amount of notice. With cause termination, means one of the parties, so the employer or the physician has breached the contract in some way. And then, the other party decides that that breach is grounds to terminate the contract immediately.

In most physician contracts, it will state the employer can terminate the physician for these reasons and they’ll list 20 different reasons. Obviously, the kind of practical ones are, they will lose their license, DEA registration, the physician is uninsurable, they get a felony, then there’s some more kind of nexus reasons like they don’t get along with their colleagues, or they’re not following employer policies. Many of them will just stick at the very end or other good cause reasons, just kind of a broad amount. I don’t get too caught up on what it is or isn’t in there. Obviously, you want to remove anything that’s completely unfair. But the section for the physician’s ability to terminate the contract with cause is either very small or nonexistent. If you do have a physician contract that has no ability or at least no language for the physician to terminate the contract with cause, that is a red flag that needs to be looked at.

Another thing that needs to be in the agreement is a cure period. A cure period means if either party thinks that the other party is in breach of contract, they must let them know formally. So, you have to send written notice to the other party that you believe they’re in breach of contract and then send it to, there’ll be a notice section in every contract that says how and who you need to send any kind of written notice to and have to follow that. And then, at that point, there would be cure period, usually, it’s between 15 to 30 days. And that just means, if one party is breaching the contract, they have 15 to 30 days to fix whatever the breach is. And then, if that is fixed, the other party cannot terminate the contract for cause. What’s the benefit of terminating the contract for cause? Well, one, it can be immediate termination. Other blogs of interest include:

In this case, as I said before, if there was a 15-day cure period and the employer still hadn’t fixed whatever the breach was, the physician could terminate the contract immediately and move on. Now, there are some complications when you’re a physician that has to be thought about before you terminate the contract with cause and move on: one, obviously, it’s specialty dependent, but there are some continuity of care issues that have to be taken into account in any physician setting. If you’re just doing shift work, so if you’re in the ED, hospitalist, radiology, pathology, things like that where you don’t have an established patient base, it’s much easier to get out of the job quickly. If you’re in primary care, cardiology, dermatology, where you have an existing patient base, psychiatry is probably the absolute number one that must worry about this. If you have an established patient base, there needs to be a plan to move those patients to a new provider. If you were just to abruptly leave practice, there’s been no notice to the patients, maybe there’s no one to replace the physician from the practice.

How to Terminate a Contract for Physicians

There needs to be mechanism to move those patients onto a new provider. There needs to be some consideration, if it’s psychiatry, into some bridge scripts so that the patient doesn’t just have no ability to get their psychiatric medications. Generally, in that case, it’s a bad situation. It’s very uncommon for a physician contract to be terminated by either party for cause. Most parties just don’t want to deal with the kind of legal complications that come with for cause termination. If a contract is terminated, 95% of the time, it’s going to be without cause. Meaning, they’re just going to say, here’s your 60 days’ notice, I’m leaving after this, I’m moving on. And in that case, 60 days is plenty of time to come up with plan for continuity of care for the patients to move them on to someone else and get the prescriptions in place.

It is just a better situation whereas if there’s an abrupt ending to an employment agreement with a physician, it can cause all those complications. I’d say one situation that comes up often is a physician will call me and say, hey Rob, the employer’s not doing any of these things, they’re not paying me on time, they’re not providing me with adequate support staff, their volume expectations are crazy. It’s been going on like this for six months. My first question is, did you let them know? Have you given them notice that they’re not fulfilling their end of the contract? And most of the time, the answer is, well, I’ve talked to them. Well, okay. That’s great, but did you give them formal notice? Did you send them a written notice explaining the way that they’re in breach of contract and that they need to fix it?

Most of the time, the answer to that is no. So, the first step is letting the employer know that they’re in breach and then hoping to fix those issues. I say the trickiest situation is it could be a variety of things. If the physician doesn’t feel safe practicing in that practice, they must consider, okay, well, what’s the liability of staying here versus leaving abruptly. Obviously, it’s a terrible situation if a physician doesn’t feel safe to practice and that could be maybe lack of staffing. I’ve found a lot of offices are having problems finding adequate support staff, so either MAs or nurses or even an office manager, receptionist, all those things must be working efficiently for a practice to work optimally.

And if any of that breaks down, it can cause a problem for everybody because they’re having to do different jobs that they’re not used to doing. And if a physician has no support staff or at least a lack of support staff and they don’t feel safe practicing is kind of a reason to terminate a contract for cause. I think, yes, it could be, but still got to go through the proper way, provide them notice, give them the cure period, and then hopefully work out those problems in the interim. So, that’s kind of the little simple discussion on how to terminate a physician contract for cause.

What a physician should do if their contract is not renewed. This honestly doesn’t happen that often and we should probably define what is either not renewed or the contract is terminated. So, most physician contracts will have automatic renewal provision. For instance, let’s say you sign a contract. It has a two-year initial term. There’s usually some language in there that states, if it’s not terminated, the contract will simply automatically renew for another year and then it would just continue in perpetuity until one of the parties terminates the agreement.

I’ve had physicians come and say, they don’t want to renew the agreement. What should I do? And this might be a stupid answer. It’s to find a new job. They’re like, well, I kind of want to fight for it. And that type of thing. Look, if you’re in a job and the employer doesn’t want you there, do not stay there. It makes zero sense. On a personal level, it will be very awkward. The employer will find ways to get out of the agreement, or they’ll just give the without cause notice and move on. We also do licensing board defense when an employee is either disciplined or maybe the employer filed a board complaint. And that person says, well, I don’t want to leave.

I want to stay here, fight whatever they’re doing. The employer will find a way, one way or another to get rid of that employee. And it will only cause more pain for the employee moving forward. So going back to the original topic of what to do if it’s not renewed, you find a new job. That’s it. It’s hard. Sometimes, it’s hard to say, well, why wouldn’t they want to renew the contract? What did I do wrong? It’s probably we’re finding out why. Most of the time, it’s just production. The physician just simply didn’t produce what the employer’s expectations were. Now, most of the time, the volume issue is not the fault of the physician. It’s a lack of marketing, a lack of referrals. Maybe the staff is poorly trained, doesn’t do a good job of providing solid patient care experience.

There are several reasons why someone’s volume won’t hit expectations. But it’s not, or it’s usually not just the physician simply is too slow. Doesn’t want to see the number of patients that are expected. So hopefully that was helpful as far as what to do if your contract isn’t renewed. Find a new job!

Remedies for Breach of a Physician Contract

How Physicians are Paid in a Productivity Model
Scroll to top