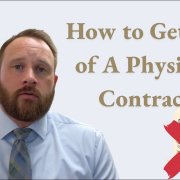 So, how can a physician get out of a contract? Now, how to get out of it, I guess, could have different meanings. We’ll just go through the normal ways to get out of a contract or how it would end. First, you have  the term of the contract that would just end and neither party would renew the agreement. If you have a two-year term and it doesn’t automatically renew, if no one wants to renegotiate or extend the term, the contract ends, that’s it. Second, you can mutually agree with the employer to terminate the agreement. At that point, the contract would end. The third would be without cause termination, meaning you would give some kind of notice, most contracts somewhere between 60 to 90 days notice.

You give them notice, finish out the 60 days, then you can leave. And then the last way to terminate an agreement is with cause. I mean, I think this probably is what most people think of if they get out of a contract. In any contract, at least it should state the main reasons how a contract can be terminated with cause or for cause. Now, you’ll find that most of these sections list 20 things that the employer can terminate the physician for, and many times it’s completely silent as to how the physician can terminate the agreement with cause. Obviously, if someone is breaching the contract, meaning not following through on one of the terms of the agreement, then if they’re in breach of contract, a physician could theoretically terminate for cause. Most of the time, there would be what’s called a cure period.

And in most cases, it’s somewhere between 15 to 30 days. How that would work would be, if the physician thinks the employer is breaching the contract, in some way, they would send them a written notice saying, here are the things you’re doing that are breaching the contract. Then you have a certain amount of time to fix the breach. And if the breach isn’t fixed in that time period, then the physician can immediately terminate the contract. One thing I find is that most physician contracts are generally silent as to how the physician can terminate the agreement for cause, especially if you’re with a, maybe like a smaller physician owned group. Many of those contracts are highly slanted towards the employer, and that would be one of the things that would favor the employer. At least one suggestion is if you’re given a new employment contract, make certain that there is some language in there that states the employee, meaning the physician, can terminate the agreement for cause if the employer doesn’t fix some kind of breach within a certain period of time. Other blogs of interest include:

If that’s not in the contract, it needs to be. That would be the way to get out of the agreement. So, you have the normal ways contract ends, mutual agreement, terminate without cause. But the only way to get out, meaning like the employer did something wrong and you want to leave, is you got to give them notice of what they’re doing wrong. And then, if they won’t fix it in that time period,  then you can terminate / get out of the contract. These are tricky issues. I get calls all the time from physicians who say, my employer is doing this and doing that or not doing this, they’re not supporting me. I don’t have the proper staff.

Contract Issues Can Get Messy

And that’s the start. If you haven’t done that, it’s hard to go anywhere from there. If you’ve just been sucking up a terrible working environment for six months, and then finally you’re fed up and then want to get out immediately, you have to let him know about it. Got to give notice.

I feel unsafe due to the volume of patients they expect me to see. And my first question is, did you let them know about it? Have you given them notice? There are things that are making this job either unsafe or they’re not following through on the contract. And most of the time they say no, or I’ve talked to them verbally about it. You need to, in writing, in the notice section of your contract. Meaning, it will state if there are notices to be given, you need to give it to this address, to this person in this way, you need to follow that. You need to put it in writing, these are the things you’re doing that are in breach of contract, or these are the things you’re doing that is kind of making it unsafe to practice.

Can You Break Physician Employment Contracts?

Every day, I deal with physicians who are either having new employment agreements that need to be reviewed or they’re on a current agreement that they need to analyze, usually due to wanting to terminate the agreement. One frequent question, and it’s kind of like the base level question, is whether you can break a physician contract. Well, obviously, I think defining break is probably the most important part of that. So, can you break a physician contract? If we’re meaning, can I breach a contract, not following through on the terms of the contract? Sure, you can.

But then you would open yourself up to liability. You could be sued, and litigation could begin. If there’s an arbitration clause, then it could go to arbitration. The employer could come after you for damages, for recruitment fees for a new physician, lost revenue from you, leaving extra admin fees if there’s no physician to support. Can you breach a contract? You can, but it’s certainly not a good idea. For the purposes of this video, if we’re going to say, can I break a physician contract? I think the best way of handling that would be, can I terminate the contract? And certainly, yes, you can. Every contract, at least every physician employment contract will have a section called termination. And in that section, it will dictate the terms of how the physician can terminate the agreement.

There are usually three ways: One, by mutual agreement. Meaning, if you and the employer can come to an agreement, then the contract can be terminated and then maybe you can work out how long the physician will stay. That does not happen very often, to be honest. The second way the contract can be terminated is with cause. And it goes both ways. For the most part, most of these employment contracts are highly slanted towards the employer, as far as what they can fire the physician for. And honestly, most contracts are completely silent on what the physician can do if the employer breaches the contract. Some normal things that the employer can terminate a physician for immediately, for cause at their option. So, the physician loses the license, DEA registration, they’re uninsurable, they’re on the OIG list, those types of like obvious, right?

Like you can’t practice as a doctor, so you can’t fulfill the terms of the contract. The employer can fire the physician immediately for that. Now, the most important section is, can a physician break a contract? If we’re assuming break means terminate, there should be a section that’s called without cause termination. In that section, it will state, normally either party can terminate the agreement with a certain amount of notice to the other. I’d say, the industry-standard amounts are between 60 to 90 days. So you would just give the employer notice as it’s written. And there’s also a notice section that says how you can give effective notice. So, you’d write them a letter and then note go through the notice section properly, usually a certified mail, hand delivery, or email which is not very often.

If you just verbally tell your boss, hey, I’m leaving. That won’t be effective notice. So, if it’s 60 or 90 days, you give them 60 days’ notice. Wipe your hands of it, you’re gone. Now, there are some considerations, however, if you do break the agreement, terminate the agreement, in this case, if you’re kind of a new physician and you were given a signing bonus or relocation, usually there’d be forgiveness in the first couple years. Meaning, if you leave before the initial term, you will have to pay back amount of the signing bonus and relocation assistance. The second consideration is, are you going to have to pay for tail insurance? Most contracts, at least for the smaller physician owned groups, will have clause that states, if the physician terminates the agreement without cause, they’ll be responsible to pay for tail.

If you don’t know what tail insurance is, I have some other videos that kind of discuss that you can look at. The last consideration is all the restrictive covenants that will apply. If you terminate the contract without cause, those restrictive covenants are going to apply. Restrictive covenants would be the non-competes. It is non-disparagement like all the things you can’t do after the contract ends. Just because you terminate an agreement doesn’t mean that you don’t have either responsibilities or obligations once the agreement ends. In summary, yes, a physician can obviously break a contract, but I would suggest doing it properly, how it’s written in the termination section. And then once you decide to terminate, you got to think about all the things that you’ll be responsible for. One more thing that just came to mind, the contract will also state the payment responsibilities after the contract ends.

I just had something like this come up yesterday. They were on a net collections compensation structure. Meaning, they were only paid what was collected, but the contract stated that they would only be paid through the end of the date of termination. With a normal 90-day accounts receivable cycle and getting reimbursed for claims, the physician missed out on essentially 90 days of collection. If you think of it this way, they almost worked for free for the last two or three months, which nobody wants to do. Moving forward, physicians absolutely need to be certain that if they’re on a net collections model, it states that there’ll be a collection period after the contract terminates. So that they don’t lose out on all that money. I mean, it’s absolutely sled towards the employer. It’s not fair, but a lot of physicians simply don’t think about that when the contract is terminated.

Why Using a Physician Contract Template is a Mistake

How to Negotiate a Physician Salary
Scroll to top