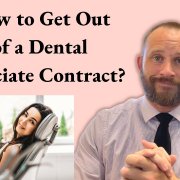 How to get out of a dental associate contract? When you are a dental associate, you will sign one of two contracts. Either an employment agreement or an independent contractor agreement. Ultimately, it’s kind of the same way of terminating the agreement, but I’m just going to talk specifically about employment agreements because those are, I’d say the standard type of agreement for a dental associate to sign. When the contract is signed, there will be language in the contract that states the term of it. So, how long it lasts and then also termination, meaning how either party can terminate the agreement. As far as the term is concerned, normally, it will be one of two things.

There is a fixed term with automatic renewals. It could be like a one-year term, which automatically renews for one year unless terminated or I’d say more often recently, there has been what’s called evergreen contracts where there’s no term listed at all, and it just states the contract continues until someone terminates it. One is not better than the other. It’s ultimately the same result. After you find out what the term is, then go to the section that talks about termination. The ways to terminate a contract are one, by mutual agreement. If both parties feel like it’s just not working out, they don’t need or require a certain amount of notice, they just say, alright, this doesn’t work out. We’re both just going to wash our hands of this and move on.

Two, if there was a fixed term, let’s just say it was one year and there was no language about automatic renewal. If the one-year term expires, neither party decides to renew, the contract is terminated and that’s it. For cause is another type of termination. If one party is in breach of contract, there’ll be language that states the party who thinks that the other party is in breach has to give them written formal notice that says, you’re in breach of contract due to this. And then normally, there would a language that’s called a cure period. And the cure essentially gives the party who is breaching the contract a period to fix whatever the problems are. Normally, it’s somewhere between 15 to 30 days. Other blogs of interest include:

In this scenario, let’s say the dental office is not paying a bonus that they said that they would, or it’s not timely, or whatever the issue is, the dental associate would send them a written letter saying, we agreed that you would pay me this amount of bonus, but you haven’t paid this. You are in breach of contract, you have 15 days to fix the breach, or I have the option of terminating the contract immediately. That’s one way to get out of the contract. The last way and the most frequent way is through what’s called without cause termination. Every contract that a dental associate signs absolutely needs to have without cause termination. And what that means is either party can terminate the agreement at any time with a certain amount of notice to the other. Why is this important? I find this, especially in the dental industry. The volume/if compensation that’s tied to collections can really be puffed up before the dentist starts. And so, they might get into a situation where maybe they’re being paid purely on production, the volume simply isn’t there, they’re making nothing, and then they’re stuck in a contract if there’s no without cause termination language.

So, what you want is somewhere between 30 to 90 days for without cause termination notice. How that would work is just like if someone is in breach, the dentist will then state in the written letters that I’m terminating the agreement, per without cause termination, my last day at work will be X date, appreciate the opportunity. And that’s it. That’s all you must do. That’s the most normal way of getting out of a dental associate contract. The same goes for them as well. If maybe they don’t think it’s working out with the dentist, they can give them notice, and then they can either make the dentist work out whatever the notice period is, or sometimes they can just tell them, look, go home or we don’t need you anymore.

However, they still must pay you for that notice period. So, if you had a 30-day notice, the dental office states were terminating the agreement. We don’t want you to come to work tomorrow. They still would have to pay the dentist for those 30 days. Now, the tricky part comes in. If you’re not on base salary, you’re not getting a daily rate, or you’re only getting paid on production, obviously, if you’re not productive, you’re not going to get paid. Then there needs to be a discussion prior to signing the contract and get language in there so that the dentist isn’t essentially working for free or not getting paid at all for that notice period. The reason why there is notice period, at least in the healthcare field, is generally for continuity of care. What they don’t want is either a dentist or any kind of healthcare provider to just not show up one day and say I’m leaving.

And then there’s a bunch of patients on schedules, people who need work done, and there’s no one to provide that. They can put the patients in a tough spot if there’s just no notice and their provider leaves. It is not the dental associate’s problem, however, if they give enough notice, these are the patients of the practice, not the dental associate. And so, when the dental associate terminates the agreement or is terminated, once they leave, they have no obligations as far as the patients go or having to worry about referring them out or transitioning somebody else. That’s the employer’s problem. So, to get out of a contract, the term can end, you can mutually agree to terminate it, you can terminate it for cause if the other party doesn’t fix a breach, or you can just give without cause termination in a letter, finish out your time and move on.

What Happens When a Nurse is Reported to the Board?

How Long are Physician Locum Tenens Agreement?
Scroll to top