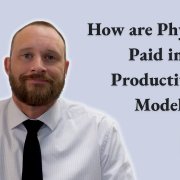 How are physicians paid in a productivity model? First, there are multiple ways of calculating productivity for a physician. And then, of course, there are multiple ways to compensate them for that. I think there are four main areas and we’ll hit all of them. One, you have just a straight net collections-based contract, you have just a straight RVU production contract, you have a hybrid of base salary plus net collections, and then a hybrid of base salary plus RVU production. We’ll just kind of go over the basics of all four of those. First, straight net collections contract. What that would mean is, anything that is collected by the practice for the physician services, the physician would get a percentage of that.

The general percentages are somewhere between 35% to 45% of their net collections if it’s a pure net collections-based agreement. 45% is on the high side, but I’ve seen from 35% all the way up to 45% if it’s only based on net collections percentage. Some of the downsides of this are, at the beginning of the agreement, the physician is going to see almost no compensation for a period. The average accounts receivable cycle for an insurance claim is somewhere between 30 to 90 days. And so a physician who is just being paid on net collections could be working for a month, but none of that money is collected for two months afterward. So, the physician could theoretically make $0 in the first couple of months of the agreement. In that situation, sometimes we’ll have a base draw, maybe for the first three to six months.

And then that money given to the physician will be taken out over time, just so that they’re not working for no income for a period. Is this a fair way of being compensated? Sure. I think it’s also volume dependent. You also must rely upon the billing and collecting efficiency of the practice that you’re with. Some specialty, dermatology comes to mind, where these seem to be much more prevalent than others, but that’s kind of the net collections productivity. Second, the RVU production only. I have several videos on RVUs if you don’t know what those are, but essentially for every encounter, there is an RVU value assigned to it. And then, the physician is paid their RVUs produced times a compensation factor. So, a numerical or monetary value, usually between $35 all the way up to $80, it is specialty dependent. Other blogs of interest:

And whatever the physician would then produce in RVUs, usually monthly, the calculation is simple. That would be RVUs times the comp factor, and that’s how much they would make. The benefits of RVU versus net collections are, in net collections-based agreements, it’s only what the practice gets, so insurance write-offs, defaults by patients who just simply don’t pay the bill, as I said before, inefficiency in billing and collecting. All those things can affect what the physician makes. If it’s a net collections based and RVU based contract, the physicians are only paid for what they do, collections have nothing to do with it. So, the physician will likely benefit from an RVU based production model versus collections because all the bad debt doesn’t matter. Now, most private practices don’t use RVUs.

And then, they would come up with an annual target for their RVU production. Let’s say it’s a family practice, and the baseline is 6,000 RVUs per year, then they would just divide that either by monthly or quarterly and anything that they generate above a certain threshold, so if the expectation is 6,000 a year, then you would just divide 6,000 by 12, and then any RVU generated above that per month, that’s when they would receive the bonus. You would take the RVUs produced above that amount times whatever the compensation factor is. The benefits of the hybrid model obviously are, there’s kind of less variability and the fact that they will have a base, so that there’s a minimum amount that the physician will make, but then there are also bonuses on top of that as well.

Once again, it’s specialty-dependent, but most physicians don’t like the potential downside and variability of maybe making much less than a month than others. For instance, if you’re a physician who is taking a lot of time off in a month, there is a good chance that, let’s just say, someone takes a two-week vacation, well, if you’re being paid purely on collections or RVUs generated in a month, that month is going to be much less than you would make in other months. And some people would prefer just kind of a steady-state and if they outperform that then they would get more. So that’s kind of how physicians are paid under a productivity model.

You have the 120 annual base, right? And just divide that by 12. And so, you have 10,000 a month and then after the quarter, they’ve paid you 30,000. In addition, at the end of that, they would say, alright, did you generate 1500 RVUs? Then anything above that, you would then get multiplication where they’ll take the surplus RVUs times compensation factor, and then you would get that as a bonus at the end of the quarter. Now, in that scenario, that’s not a way that most places would do it, because most physicians are not going to be okay with getting a small base each month and then a big windfall at the end.

Until we can kind of take a total look at all of it, there’s no way of knowing what’s the best in your situation. Then also there are employers who just say, this is the model we’re using. And you must deal with that as well. In that case, if you know what the model is, and that they’re not going to change the model, the one variable that they can change is the numbers used. The RVU threshold, the net collection percentage, what the base straw is, those are all the things that can change that can determine whether it’s a great opportunity for a physician or not. That’s a brief example of a base compensation plus productivity model for a physician.

How to Terminate a Physician Contract with Cause

How do Physicians Earn a Bonus?
Scroll to top