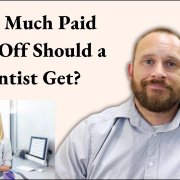 How much time off should a dentist get?  Simple, let’s say you’re a dental associate, you’re looking at a new contract and then they’re offering you a certain amount of time off. Is it fair how much they’re offering you? Well, first, let’s talk about what goes into paid time off. PTOs, known as paid time off, usually include four things. It’ll have vacation days, sick days, holidays, and then continuing education. If you were to add all of those up, that’s the number that matters. If you have 10 days of vacation, 7 federal holidays, 5 days for CE, and 5 sick days, well, if you add all of those up, then it could be a reasonable amount.

You need to make certain that the contract states how much you get and then what part of that total number corresponds to the vacation, sick days, holidays, and CE. Now, there are some places that use what’s kind of called a pure PTO system, meaning, everything comes out of the same bucket. So, if you’ve gone from the office for whatever reason, it’s a holiday, you’re continuing education, you’re sick, you’re on vacation, it doesn’t matter. Everything comes out of that bucket. But then there are others who specify, and this is the most common way of doing it, they specify exactly how many days you get for each thing. Let’s break down those four elements. As far as vacation goes, most dental associates are going to get somewhere between 10 to 15 days of vacation. If you’re offered 5 days of vacation, that is not enough.

So, somewhere between 10 to 15 days. Sick days can vary by state. There are some states that have an actual law that states if you’re a full-time employee, you get this many sick days. There are other states where it’s literally ambiguous. Normally, most places will offer somewhere between 3 to 5 sick days, or they might even lump it into the vacation. But that’s a reasonable amount. As far as federal holidays go, in most places, 6 or 7 federal holidays per year. That’s easy to understand. And then continuing education, once again, somewhere between 3 to 5 days. A dental associate should aim for somewhere between 20 to 30 total days of time off. When you add up those four things, it should be somewhere between 20 to 30 days. If you’re not within that range, I mean, obviously, if you’re beyond that range, great, good for you. If you’re not to the 20 days adding all that up, you’re not getting enough time off, or at least you’re not getting enough time off compared to your peers, so you need to ask for more. Other blogs of interest include:

Now, a couple of considerations if you are on a pure production compensation agreement, meaning, maybe you get a daily rate with no paid time off. When I’m talking about this, usually, it would pertain to people that are on salary. Sometimes, if it’s a production/salary hybrid. But if you’re just paid a daily rate, it’s possible they will still pay you for those days that you’re off. But many employers will simply state you get paid if you work and you don’t get paid if you don’t, but you can take as much time off as you want. If you are on a pure net collections-based agreement, meaning, you would get a percentage of whatever the dental practice collects based upon your personally performed services.

In that scenario, obviously, the less you work, the less you’re going to collect. And so, you need to kind of, I guess, determine how much time off you can take versus how much you’re going to make by taking that much time off and then decide how much is the right amount for you. If you’re on a pure base salary, let’s say you make 110,000 per year, the more time off, the better because your compensation isn’t going to be affected whether you’re there or not or what your productivity is. So, try to advocate for more if you’re on a pure base salary, whereas if you’re on hybrid or pure productivity, it might change the equation in some way. In summary, you should aim for somewhere between 20 to 30 days of total time off. Anything above 30 would be rare, to be honest. But somewhere in that range would be considered fair in my opinion.

Is 10 Miles a Reasonable Non Compete for a Veterinarian?Surgeon Contract Negotiation Tips
Scroll to top