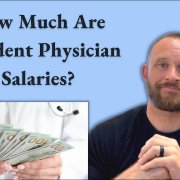 One question med students have is what is the average salary for a resident physician? After a physician graduates from medical school, they move on into an internship, and then into residency within their specialty, and they do get paid. But for most of them, it’s simply not even remotely enough for work that they’re doing. So, it’s not uncommon for a resident to work 70- or 80-hour weeks. The average salary for a resident in the United States is around $63,000. Now, maybe your resident right now, and you’re thinking, I don’t even make close to that, or maybe I make more. This is an average across all specialties. Some specialties will make a little bit more than others.

Some could be as high as 60s, whereas maybe in family medicine, you could be about 50s. Can a resident negotiate their salary during training? No, they simply have no leverage. Anytime you’re negotiating a contract, it’s based upon leverage. And even those residents coming out of training completely and moving on to their first employed job, they don’t have a ton of leverage either. The only leverage they have in those situations are, one, if they’re in a specialty that’s needed or two, if they’re willing to go to a geographic area that’s under-served and needs physicians.

So, around 63,000 is the resident salary. If you think of it this way, if they are working 70 to 80 hours a week, that means they’re making about $15 an hour and providing care as a doctor for $15 an hour. Now, obviously, once they move out of training, the salary increases substantially, and for some specialties could be an eight fold increase, at least just coming out. But that’s what it is. One consideration that we consider when we are reviewing and negotiating the resident or fellow’s first contract is most of them don’t have a ton of money coming out of training. Other blogs of interest include:

So, if the new employer is offering a signing bonus, or relocation assistance, we want to make certain that they’re getting a chunk of that prior to moving and starting the new job, wherever, if they are moving from where they’re currently training. Simply most residents, especially if they have family, may be the only breadwinner, at that point, they don’t have $10,000 to $15,000 if they’re making a cross country move. So, we need to make certain that either the employers pay their moving costs directly to the moving company, or they’re going to front the money prior to the physician needing to spend it on the move.

In that way, they don’t have to outlay a ton of cash because it certainly is expensive moving from one place to an entirely different one. Residents certainly are underpaid. Unfortunately, it’s just kind of part of the process that they must go through to start to be fairly compensated for the services they provide. But it’s just tough when you’re making that little. And I think the average physician has about, I think 47% of physicians have student loans over $200,000. It can be a big burden.

How Much are Fellowship Physician Salaries?

What is Arbitration in a Physician Contract?
Scroll to top