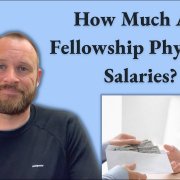 What is the average salary for a physician in fellowship? At the basic level, after a physician graduates from medical school, they go into an internship and then into a residency program in their specialty, and some specialties require extra training. And that’s what’s called a fellowship. Most fellowships last somewhere between one to three years. And after that, they can then move on and have an employment relationship where they can practice in their specialty. Is there a huge difference between residents and fellowship salaries? The answer is no, there isn’t. The average resident salary is around 63,000 a year. Now, obviously, that’s the average. So, there will be some lower than that and some higher. It’s specialty dependent.

I think the average for family medicine, the physician in training in the residency makes around 51,000, and then maybe some of the surgical specialties can be in the high 60s. But you logically would think, alright, if I’m going to get through residency and move on to my fellowship, I’ll make more money. And the answer is not really. The average fellowship salary is about the same as the average resident salary. Now, the fellowships, obviously, anyone who must move into a fellowship is on the higher end of a specialty. So, if the range is between 50 to 70, they’ll be higher towards the 70 range. But there is not going to be a significant jump between the money you make as a resident and then the money you make as a fellow.

One word of advice for those maybe either just coming out of a residency or coming out of fellowship, when you have a new job offer after you are either done in your PGY-3, or you’re done whenever your fellowship is, one thing you need to think about is most people in training are not flush with cash. And so, almost any employer is going to offer the physician either a signing bonus or relocation assistance, or both. But most of them will have language in the contract that states they will either reimburse the physician once they start or they will offer the signing bonus with their first paycheck after they’ve begun providing care. That can be a burden on some physicians who just simply don’t have $10,000 to $15,000 to move. Other blogs of interest include:

If a physician has a family and they’re living in New York, they get a job in California, it can easily be $15,000, and sometimes having to pay that out of pocket at the beginning can be a very big financial burden. So, make certain to put language in your contract that states either the employer will pay the moving expenses directly to the moving company prior to the move or you will get that money prior to having to move so that you can just use that for the moving expenses, or even using a portion of the signing bonus to do that. And then most contracts will have language that states that if the physician leaves within the initial term, they’ll have to pay back a prorated amount of those bonuses, which I think is fair.

If they’re going to outlay the cash up front, they certainly don’t want a physician to just leave after a few months and take all the bonuses with them. A physician in fellowship is around mid $60,000. I think 47% of physicians have over $200,000 in student loan debt. And then, if you think that they’re working 70 to 80 hours a week, which some of them are, it works out to be like $15 an hour, which obviously is tough to support a family at that point.

How Long Does Tail Coverage Last?

How Much are Resident Physician Salaries?
Scroll to top