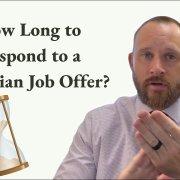 How long should a physician take to respond to a job offer?  As always, it depends. Let’s go through the job interview process, and then maybe we’ll discuss when would be the right time. If a physician is either coming out of training or maybe they’re in a current job and they’re looking for a better opportunity, there’s several ways you can find a new job. There could be advertisements, there are physician recruiters who will actively reach out to physicians and see if they’re interested in a new position, if you have a colleague that says, hey, we have an opportunity.

Are you interested? that type of thing. There’s two ways it can go from there. There’ll be a discussion with the point person. For a hospital or healthcare network, it’ll be a physician recruiter. Maybe if it’s like a smaller physician-owned practice, it’d be the owner of the practice. If it’s a semi-large physician group, they probably have a recruiter on staff as well. And you’ll talk with them and discuss the position. Then at some point, it’ll get a little more serious and many organizations will then send you an offer letter. And so, in the offer letter, there will be basic terms, right? The term of the agreement, maybe how long it’ll take for you to terminate the agreement without cause, compensation, maybe a signing bonus, if you’re moving, relocation assistance, maybe some basic terms as far as the restrictive covenants go, non-compete, non-solicit, any bonus opportunity and then probably some brief mention of benefits.

And then also, let’s say you signed the offer letter, they present you with an employment agreement. They may say to you, we need you to decide by X date. So, if you have a solid date and they say you need to respond to us by this date, then those are the times that you need to respond to them. They’re certainly not hard and fast deadlines for the most part. For instance, if you were maybe thinking over an opportunity and you were a few days late from providing them with a signed agreement or a signed offer letter, it’d be unusual for the employer just to say, no, you missed the deadline. We’re Yankee in the offer. That is not something that would normally happen. I mean, the employer wants to create a sense of urgency so that they can get a yes from the physician.

So, they don’t have to keep recruiting for the position. It is somewhat expensive for a firm to recruit a physician if they are using an actual recruiting firm. They want to kind of lock down a position as soon as possible, not have to worry about it, and then can either move on to other physicians or just if they have no more opportunities, one more thing they don’t have to think about. There will be cases, especially for physicians in training where a job will reach out to them. Maybe they’ll sign an offer letter, maybe not, not everybody offers offer letters. They may present an employment agreement to the physician and then just kind of leave it open and say, get back to us when you can, or reach back out to us if you have questions, that type of thing.

In that scenario, this is where this strategy comes into play, and this is really directed towards people in training. If you lock into a job early, then you are kind of missing out on any of the opportunities that may come after that. So, if you were to sign an employment agreement and then you had five more offers that were much better, you either must think about breaking the contract before you even started or forgo all of those great opportunities. I mean, there’s like a sweet spot. Some people crave security. When I say some people, I mean those in training who crave the security of having a job, lockdown, don’t have to worry about it, can start prepping for a move, that type of thing. There are considerations involved. Let’s say someone has a family or they’re moving to an area to be near family.

They want to get that locked down as soon as possible. And others are just open to the best opportunity. And so, they may want to last a little bit longer. At some point, the employer is going to give you a drop-dead date, and that’s when you need to give them your decision. If you have a job that you absolutely love and it’s a no-brainer, there’s no reason to wait. They may move on to someone else or maybe they’re interviewing multiple candidates and they’re just waiting to see who’s going to accept the job first. So, in that scenario, if you have your dream job, no reason to mess around. Get the contract reviewed, get the offer letter reviewed, work out the details, sign the agreement and move on with your life to a better life as a practicing physician out in the world instead of in training.

Can you Pull out of a Signed Physician Contract?

Do you Need Tail Coverage for Occurrence?
Scroll to top