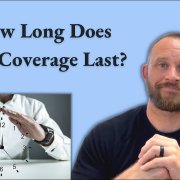 How long does tail insurance last? When I am reviewing a contract with a physician, the malpractice policy and then potential payment of tail insurance, if necessary, is always a big discussion point. Let’s briefly go through in what scenario would a physician be responsible for tail insurance, the cost of it, and then how long it lasts as well. There are two main types of malpractice insurance. You have the occurrence-based and claims made. In a claims-made policy, a policy must be in effect when the claim is actually made. It’s possible that a physician could leave an employer and then two years later, be sued. And since they are no longer employed and that policy is ended, they need a gap policy that covers the last day that they saw a patient with the employer and then the last day that they can be sued.

In most states, the statute of limitation is two years. Although there are some exceptions that we’ll get into as well. If it’s a claims-made policy, someone must pay for tail insurance. And in an occurrence-based policy, no tail coverage is necessary. It just means a policy must be in effect when the malpractice event occurred. The main difference between claims-made and occurrence is that occurrence is usually about a third more expensive. The physician or the employer must make the decision whether they want to pay a third more per year for malpractice or pay a little bit less but then have a big chunk on the end for tail insurance. Let’s say a scenario where the physician is responsible for paying tail. The contract ends with the employer, the physician is responsible to purchase the tail policy.

A good rule of thumb is it’s usually around twice what the annual premium is for the physician. So, the annual premium is just how much money must be paid each year to insure the physician for malpractice, just multiply that times two, and that’s usually a good ballpark of what the physician is going to have to pay for tail. Now, a couple of considerations as far as how much it costs. One is the length of the policy. Once again, most states have a two-year statute of limitations. However, it’s two years from when the patient either knows or should have known of the injury. And then there are also some exceptions for minor patients to be able to see once they reach the age majority. In that situation, sometimes, a longer tail policy makes sense. A tail can be one year, two years, five years, or ten years. Other blogs of interest include:

There are also unlimited tail policies. Meaning, it just goes on forever. And if any claim arises in the future, no matter when it’s filed, the physician is covered. Now, why would a physician pay less or more? Simple, it’s cost. Like a normal tail, let’s just say that covers five years would probably be around twice the annual premium. An unlimited policy may cost more than that. So, if the physician is responsible, they need to think about, alright, what’s my liability here? What’s the potential for me being sued? Certainly, what specialty they’re in, I think is important as well. And then they can make a financial decision. Now, there are two ways of getting out of paying for tail. One, if you stay with the same insurance company, let’s just say, we have a cardiologist who is working for the private physician-owned practice, and then, they use whoever the insurance company is, they move a job, that new job uses the same insurance company.

Usually, they’ll just roll over the old tail into the new policy. The physician won’t have to pay for tail. Now, obviously, when you start a job, there’s just absolutely no way of knowing if you leave the job, who the new employer will be if they use the same insurance policy. So, that certainly shouldn’t be relied upon. The other way of doing it is your new employer paying for your old tail, and that’s called nose coverage. This doesn’t happen very often. It can, certainly, but most employers do not pay for nose coverage. And if they do, it’s almost always a hospital network. It’s exceedingly rare for a physician for a smaller physician-owned practice to pay nose coverage for any of the physicians they’re bringing in.

It just won’t happen. What makes sense as far as how long it should last? Well, the longer the tail, the safer it is for the physician. So, getting an unlimited tail makes sense. Now, as I said before, the cost is a factor. Let’s just give a scenario where the physician was sued, and then either the tail is expired and it’s a good claim, meaning, they didn’t miss the statute limitations. It hasn’t run yet. Well, the physician could be personally liable, not only for whatever the judgment is but for attorney’s fees and things like that.

It could cripple someone financially if they don’t have a malpractice policy in place if they are sued. It’s not worth it, at least I don’t think it’s worth rolling the dice. It is smart to get a tail policy and the longer the tail, the safer it is for the physician. Anyway, that’s kind of how long the tail policy will last.

Can you Negotiate After Signing a Letter of Intent?

How Much are Fellowship Physician Salaries?
Scroll to top