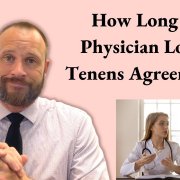 How long are most locum tenens agreements? A couple of things to consider: one, just the nature of locum tenens positions, normally, it’s shorter. Most contracts last a year, maybe two at the most, but every contract that a physician signs for a locum tenens opportunity is going to have without cause termination. Without cause termination simply means either party can terminate the agreement with a certain amount of notice to the other. For most locums contract, it’s somewhere between 30 to 90 days. What that means is let’s say the physician wasn’t unhappy or they just didn’t want to pursue any other jobs with them. They would just give written notice to the company saying, I’m just not interested in taking any more positions with your company.

And then if they had some scheduled shifts or a block assignment or something like that, they would work that out, and then at the end of the notice period. In this case, let’s say it was 30 days, they’d work out the 30 days that they were scheduled. And then after that, they could leave and move on to whatever in locums agreements. There are a couple of things to think about if the contract terminates. Sometimes, there will be language that penalizes the physician for leaving within a period. For instance, if that doctor doesn’t provide services for the entire year, maybe the company says, we want recoupment of recruitment fees, credentialing, privileging, licensure, those types of fees. Also as always, if the doctor ends up taking a long-term position at one of the hospitals that they were placed at by the locums agency, there will always be a placement fee.

And then usually, it will state the facility is responsible to pay the fee. However, if they either don’t or refuse to pay, then it’s on the physician to pay that amount. We’d always try to get that removed from the contract. It doesn’t make a lot of sense that the physician would be required to pay that amount. It’s just a cost of doing business for the facility and they should handle whatever that fee is. When there is without cause termination in any contract, it doesn’t really matter how long the term is. So, even if, as I said before, a normal length of term for a locums agreement is one, or maybe two years, if you can terminate the contract without cause at any time, and this goes for both parties, it’s as long as the notice period is for the without cause termination. Other blogs of interest include:

It’s not like you must provide care for that company for the entire term of the agreement. If the physician is unhappy, if they don’t like the compensation, maybe that they’re getting for these different facilities that they’re being placed at or maybe it’s just a bad working relationship with the staffing company, in those scenarios, they don’t want to stick around. There are so many opportunities for locum work for almost any type of physician. Any specialty that working for a company that maybe is placing you in bad locations, or isn’t paying as much, you can always find locums opportunities. And if it’s not working out with the company, you don’t think they’re treating you fairly, just give notice, move on, and find a better company. It’s just a normal way of handling these things and no physicians should feel like they’re stuck in something that they can’t get out of.

I mentioned this earlier, this is really something that we make certain to negotiate are the penalties associated if the physician leaves within a period. They should never have to pay for tail insurance. They should never have to pay back any recruitment fees, credentialing, or privileging. That’s just, as I said before, the cost of doing business. So, you need to pay attention to alright, anyone who enters into a contract, they always have the best intentions, they think it’s going to be great, they’re super excited. And then once they get into it, it can turn quickly. And maybe it’s just a much more disadvantageous position than what they were expecting. They always want the opportunity to get out of the contract. So, make a certainty of without cause termination and that the penalties associated with terminating the agreement early before the initial term ends are not really prohibited. I mean, you don’t want to have to pay back $50,000 for a locums job. That just makes absolutely no sense. Anyway, that’s how long a locums agreement normally lasts. But ultimately, it just matters how long the without cause termination is.

How to Get Out of a Dental Associate Contract?

Is There a Penalty for Early Termination of an Employment Contract?
Scroll to top