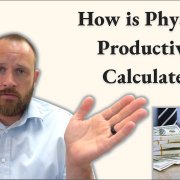 What are the different ways physician productivity can be calculated? I find, as someone who reviews contracts literally every day, the two most likely ways of calculating productivity are by either net collections or RVUs. And so, let’s break both of those down. If someone is employed with a hospital network, their productivity will likely be calculated through RVUs. RVUs are relative value units. CMS, Center for Medicare Services issues a list every year and has different RVU values associated with the different types of encounters that the physician has. In most scenarios, whatever RVUs are generated, that’s multiplied by what’s called a conversion factor, and that number can vary as well.

It’s usually somewhere between $35 to $80, based on the physician’s specialty. Let’s just take a scenario where a physician has been employed in the hospital network for a couple of years on an income guarantee and then their contract is going to switch to just pure RVU production. What will normally happen is base salary level will be chosen that’s below what they would’ve made the year prior. So, if somebody made $240,000 and their RVU production matched that in year two, and then they switched to the production, maybe they’ll back down whatever the draw is. Like what they’re paid per payroll. So, if they’re receiving 20,000 per month, maybe they would back that down to 15,000. And then if the physician, when they did the RVU calculation exceeded that, then they would get paid that amount at the end of the month, or quarterly as well as a normal way of doing it.

If they’re doing RVU production, it’s very rare that it’d be less than quarterly or monthly. That’s how a physician gets paid for RVUs. You take the RVUs generated, multiplied by a conversion factor, and that’s what they get. And then at some point, there’s always a reconciliation to make certain that they are getting what they burn. And there are scenarios where a physician may make less than what they had been earning. And then, in that case, most contracts will carry forward deficit. So, there could be a negative balance for a physician in a month. And if so, the contract will likely state that the negative balance will be carried forward into the next month until a physician exceeds the negative balance. The other way is through net collections. Net collections are literally what the practice collects for the physician services. Other blogs of interest include:

Now, net collections are utilized for the most part in private physician-owned practices. The difference between why someone would use RVUs versus net collections is a hospital network utilizes RVUs because there are many times when a physician must provide care, knowing that the person that they’re providing care to simply can’t pay the bill. The hospitals and the physicians as well don’t think that’s fair that they are being part of the job of providing that charity care, but they’re still providing that care, and so they want to get paid for it. And RVUs only consider the work that the physician does. It doesn’t consider what’s collected, whereas, with net collections, the reason why most physician-owned practices utilize net collections is that almost everyone that they’re providing care to in the practice has insurance or private pay.

Most smaller physician practices aren’t going to provide that charity care. They want to know, alright, will the physician be paid for what we receive? Now, why can it be different? Well, there could be write-downs from the insurance companies. There could be write-offs from patient care issues where they give a refund, something like that. So, even though the physician may provide care, what’s received by the practice could be less. And in a net collections productivity model, usually, it would be monthly productivity. The physician would likely much like the RVU scenario where they’d have small, guaranteed base, or maybe it’s not even guaranteed, but just like a draw. Let’s just take the same amount of money. Let’s say the physician is being paid 20,000 a month.

What most practices will do is say, okay, once your collections exceed your salary for the month, then you will get a percentage of whatever is collected after that, usually, somewhere between 20% to 35%. And once they reached the threshold, as far as they go up, let’s just say they collected 40,000 in a month and they had a 25% net collection with a 20,000 threshold. Then they would get 25% of 20,000. Now, I’d say rarely is a physician paid purely on net collections, meaning, there’s no minimum guarantee or no draw. It’s just whatever they do in the month, that’s what they receive. Those scenarios are tough especially when the physician is starting out because there’s no guaranteed payment for the first couple of months. And so, they could be working for 30 days and not receive any money at all.

I mean, the average accounts receivable cycle is somewhere between 30 to 90 days. In that scenario, the physician absolutely wants to make sure there’s minimum draw so that they’re making at least a little bit of money in the first couple of months, and then it will ramp up over time. The last consideration is, and this goes for both RVUs and net collections: if there is bonus structure involved, there will be language in the contract that states, if the contract is terminated, how is the physician paid? There are times when it will state, the bonuses will only be paid out if the physician is employed at the time of the payment. So, even though they may have earned the bonus, if they terminate the contract, or leave between when it was earned and when it’s paid out, they won’t get any of it.

Strategically, sometimes the physician just needs to wait until they’ve been paid whatever bonus is coming, and then they can give notice and leave. I mean, that makes the most sense. So, that’s how productivity is calculated for physicians, or at least the two main ones are RVUs and net collections.

How Do I Write a Notice of Termination of a Contract?

Is a Letter of Intent for Employment Binding?
Scroll to top