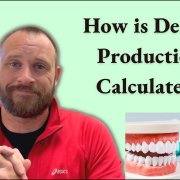 How is dental production calculated? Meaning, that if a dentist is paid via production, what are some common ways that happen? Let’s just get into compensation for dentists and dental associates. Dentists are one of the few healthcare providers where they’re given a daily rate. I mean, it’s common for a dental associate to be paid just via a daily rate. There’s a set amount that they get per day. And then if there’s a half-day, they get a little bit less than that. That’s one standard way of compensating a dentist. The other is base salary, where they just get a flat base. They work the agreed-upon hours and that’s that.

Now, if they’re paid purely on production, it can be done in several different ways. The most common way is through what’s called net collections. Net collections are literally what the dental practice receives from the patients with services provided by that specific dentist. There will be times when maybe there’s an insurance claim that’s denied. Maybe the patient just can’t pay or refuses to pay a write-off. There are situations where a dentist can provide services, and ultimately not get paid for them. And if you’re on a net collections-based employment agreement, you’re out of luck. You’re just not going to get paid for those things. As far as normal percentages, if a dentist is paid purely on net collections, meaning from the very beginning, the only thing they make is the percentage that’s collected for them.

Usually, it will be somewhere between 30 to 40%. So, you just take whatever the net collections are by that specific dental associate, multiply those times 40%, and then that would be the take home for that dentist. In that scenario, it would be done monthly. Now, there are also hybrid ways of doing it. Let’s say a dentist has a base salary of 120,000 and then the practice may say, okay, so you’re going to get 10,000 a month. And then if you have net collections that exceed 10,000 a month, then you’ll get a bonus based upon the net collections beyond that at a percentage. In that scenario, when it’s a hybrid of a base salary and net collections, a normal percentage would be somewhere between 18 to 25%. So, you have that guaranteed base. But then, you also can make more based upon that percentage. Other blogs of interest include:

Those are the normal percentages. If you’re on a pure net collection, somewhere between 30 to 40, and if you’re in a hybrid, usually between like 18 to 25 is a standard amount. It’s rare that a dental practice would compensate just based on encounters. It varies so much from patient to patient and the insurance company will then provide different amounts for whatever they’re doing. I don’t think encounters are a standard way of doing it. It’s almost always based on net collections. Now, can the dental associate negotiate the base salary and the percentage of the net collection? Certainly. They’re going to have to do some math. Now, if you’re on a pure net collections-based compensation structure, the first thing that must be thought about is what is the volume of the practice, or what is the likely potential volume once the patient base is built up?

If you move into practice and you’re getting paid purely on net collections, and the volume is low, you are not going to make a lot of money. So, you need to have a conversation with the owner about what is the expected volume such as how many patients do you expect I’ll see a day? What’s a normal amount of net collections in a month for an associate dentist here? These are conversations that must be made in advance. Not having any kind of discussions about the actual statistics is a bad idea. I’ve had some people who have signed an agreement for net collections with a non-compete, they get in there, they’re making a tiny amount of money, they immediately recognize it’s a bad opportunity, they give the notice to leave, but then they’re stuck with this onerous non-compete. So, it’s much better to do due diligence upfront. In that way, you can kind of save yourself from getting in a tough situation. So, that’s kind of how productivity is calculated for a dentist.

Early Termination of Employment Contract by an Employee

Most Common Reasons for Board of Nursing Discipline
Scroll to top