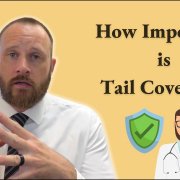 How important tail coverage is. First, we’ll talk about what tail coverage is and what type of policy you need, then the importance of it, and what are the kinds of negative repercussions if the physician does not have tail insurance. First, you will only need tail insurance if you have a claims-made policy. A claims-made policy means a policy must be in effect when the claim is made. When it’s filed and served to the physician. If a physician leaves a job, there’s going to be a gap in between the last patient they see for that employee and then the last day somebody can sue them and that’s called the statute of limitations.

In most states, a malpractice claim is two years. And that’s from when either the patient knows or should have known of the malpractice incident. That’s why it can sometimes go past two years if there was no way of knowing about the malpractice until later. If the physician has a claims-made policy, in the employment contract, it’s going to state who is responsible to pay for the tail insurance policy. So, if you are an employed physician, maybe a small physician-owned practice, it’s very likely that you’ll have to pay for tail. If you work for a big hospital network, it is unlikely you’re going to have to pay for tail. Most of the time, the big hospital networks are either self-insured, which generally means you don’t have to buy tail insurance, or they just offer that as kind of a perk of being in that job.

If you’re in private practice or employed with a private practice, it’s likely you’re going to be the one paying for tail. One question I get very often is how much does it cost? A good rule of thumb is tail insurance costs about twice what your annual premium is. How long you’ve been with the employer can fluctuate. Sometimes from 150% all the way up to 300%, but the average is about twice what you pay annually for your premium. The annual premium is just simply how much the employer has to pay to cover you for one year. Some people have absolutely no idea how much it cost. Let’s just say you’re in primary care. Usually, somewhere between $6,000 to $8,000 will be your annual premium. Other blogs of interest include:

So, the tail insurance policy would be 12,000 to 16,000, something like that. Some of the other specialties like surgery, OB-GYN, can be tens of thousands of dollars per year with a tail cost of fifty to a hundred thousand sometimes, so it’s very important. What happens if you don’t have tail insurance? Well, simple. If you leave an employer and then someone has two years to sue you and you have no insurance policy to cover that gap, you can be sued and not have any insurance to back you up, which is a problem, obviously. Even though it does cost sometimes a substantial amount of money rolling the dice on hoping that a malpractice claim doesn’t arise in that to your gap is a bad idea. I mean, malpractice, not depending upon the severity, obviously, but most policy limits are 1 million per occurrence and then 3 million aggregate per year.

You can imagine if you don’t have an insurance policy and there’s a million-dollar claim, it could bankrupt some people. So, you absolutely need to get tail. Where to find it? Well, you can go with the same insurance company. They’ll just give you a cost, you pay it, and you’re good to go. I would go shopping a little bit. You don’t have to go with the same underlying insurance provider. Whoever’s providing you with the annual coverage doesn’t necessarily mean you have to go with them for your tail insurance. I would suggest shopping around. Sometimes, I’ve had people that have found tail coverage that has the same limits, same length of time for 25, 20% less than the cost given to them by their current insurance provider. So, that is kind of the importance of tail insurance. And then a little breakdown of claims made coverage as well.

What is an At-Will Physician Contract?

Can a Physician Solicit Patients after a Contract Ends?
Scroll to top