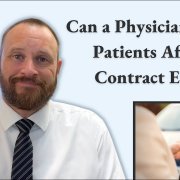 How can an employment contract be terminated?  In any employment contract and the whole purpose of them is to dictate the terms of the employment relationship. And one of the most important parts of that relationship is figuring out how the contract ends. It can end in several ways. First, generally, most employment contracts are for a fixed term. So, that could be one year, two years, or three years. And then, there may be language that states at the end of that fixed term, it just automatically renews for another year, and then another year just continues forever until terminated. That’s one way that the contract can be terminated. The second could be for cause.

Meaning, if somebody breaches the contract, most of the time, there will be a list of things that the employer can’t terminate the employee for. If they’re in an industry that requires licensure or insurance, or special certifications, and then the employee loses those, then obviously, the employer can terminate the agreement because they can no longer function in that job. There also will usually be broad language about moral turpitude or criminal activity and convictions, those types of things. So, in a scenario where a professional is in breach of contract, generally, the employer would give them notice, and then it’s called a cure or period. The employee would then have a certain period to fix whatever the problem is.

Usually, it’s between 15 to 30 days. Now, obviously, if you lose a professional license, you’re not going to fix that in a month. It’s not going to happen. In that scenario, the contract can be terminated immediately. But if the employer is just saying they’re in breach of something that can be fixed, maybe they’re not working the hours that they agreed to, or maybe there’s a call that they’re just refusing to take, something like that, that can be fixed. Those are the things where the employer would give written notice to the employee and then would allow them that period to cure whatever breaches. The opposite can be true for the employee. If the employer is in breach of contract, let’s say, they’re not paying the agreed-upon price, or maybe they’re not paying in the schedule that they said they would, or they’re calculating bonus compensation incorrectly. Other blogs of interest include:

In those scenarios, the employee can do the same thing. They can give the employer written notice and say, hey, you’re in breach of contract. You’re not paying me what we agreed upon. You have 15 days to fix the problem, pay me correctly and if you don’t, I can terminate the contract immediately. And then the last way that a contract can be terminated is without cause termination. In most employment contracts, there will be a notice period required.  Most of the time, you can’t just say to them, hey, I’m leaving tomorrow and that’s it. I’m terminating the agreement tomorrow. There’ll be at least notice period to allow, maybe not a smooth transition from an employee leaving employer, but at least provides a little bit of time for both parties to get things together to wrap up relationships with patients, clients, customers, or if for the employer, it allows them to look for a replacement or provide like in the healthcare industry, continuity of care transitioning the patients to a new provider.

When I talk to people who are unhappy with the job, and they’re like, alright, well, how do I get out of this contract? What are my options? And then it’s determined that. Just give them without cause notice and move on. I at least think most of the time, the professional wants to explain all the reasons why they’re deciding to leave. And I think that’s a bad idea. There’s just no benefit to that. You just say, here’s my notice that I’m providing, appreciate the opportunity and move on. Using this as an opportunity to air grievances or point out all the problems with the employer.

There’s just no upside to doing that. You’re going to cause bad feelings, and you never know when a relationship can swing back around. So, maybe under new management or something like that, the job that turned out to be not that great can maybe be another great opportunity. And if you burned a bunch of bridges, you’re losing a potential opportunity down the road.

How is Tail Coverage Calculated?

What is Occurrence Malpractice Insurance?
Scroll to top