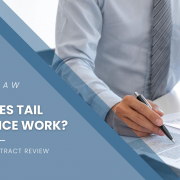 When Do You Need Tail Insurance?

There are some exceptions, but in general, two years is a good rule of thumb in this situation. Let’s say for this case, it’s two years. Suppose you leave the employer. There’ll be a two-year gap where someone can still sue you for what you did for that employer. And so, in that scenario, you need a policy that covers that gap, known as tail insurance in the industry. If you have a claims-made policy, you need tail insurance. If you have an occurrence-based policy, you don’t.

Who Should Purchase Tail Coverage?

If you have a claims-made policy, the employment contract will dictate who pays the underlying premium. Ninety-nine out of a hundred times, it will be the employer if you’re an employee and not an independent contractor. And then the employment agreement will also cover who pays for tail insurance. Now, this can vary significantly from contract to contract. If you’re working for a private physician-owned practice, it’s more likely they will be responsible for paying for tail insurance.

A physician-owned practice would rarely pay for tail insurance. I’d say maybe 75% versus 25%. So, 75% must pay for their tail insurance. In the contract, it’s going to state, alright, the physician is responsible for paying tail insurance. Let’s kind of break down the details of that. The tail policy will need to be in place before the end of the employment relationship. So, let’s say the physician gave notice, and there’s a 60-day without-cause termination. They will have to get that policy secured before the end of those 60 days when they leave.

Tail insurance generally costs about twice what your annual premium is. This varies based upon specialty. So, if maybe your primary care, it could be around 5,000 to 6,000. Whereas if you’re an OB-GYN, it could be 40,000 or 50,000 yearly. A good rule of thumb is twice the annual premium, which you will have to pay for tail insurance. It’s a one-time cost. You’re not going to have to pay it every year. But you’ll have to pay all the money upfront to purchase the tail before the end of the employment relationship.

How Long is the Duration of a Tail Insurance?

Determining how long you should get should be easy. It should be unlimited tail insurance; it should go on forever. You don’t want a scenario where you are not covered when a claim is made. And that could be financially crippling for a healthcare provider if they’re ultimately found guilty or must reach a settlement.

Add Tail Coverage to Negotiations With Your New Employer

Now, there’s no way you’re going to know, okay, in my next job when I leave this one, whether they have the same insurance or not, but that’s another way of getting out of having to pay for tail coverage. So, that’s how tail insurance works. It just covers the gap between when you leave an employer then the last day somebody can sue you. It’s around twice the annual premium. And then you can negotiate who is ultimately responsible for covering the expenses associated with it.

What are the Types of Medical Malpractice Insurance?

Let’s talk about the three liability insurance. First is self-insurance. Large hospital networks usually have their policy: they’ll set aside a pot of money and pay claims out of that. In that circumstance, generally, the physician doesn’t have to worry about purchasing tail coverage. The employer’s self-insurance program covers that. This is great. It’s excellent insurance when a physician never has to worry about tail coverage. And doesn’t have to worry about paying for the underlying premium. That is a lovely, secure feeling. That’s what most large hospital networks utilize.

So to give an example, let’s say you have a claims-made policy. It’s 6,000, then your occurrence-based coverage would be around 8,000 per year. There’s a math equation you need to consider to determine what is the best insurance policy for a physician. And I’ll get into that at the end. But honestly, physicians often don’t have a choice between an occurrence-based or a claims-made policy. It’s whatever the employer of a small business chooses to provide. That’s what the physician must go for.

The last one is the claims-made insurance policy. That means an insurance policy must be in effect when the claim is made. Suppose someone terminates a contract, and they no longer work for the employer. There’s still a gap between their last day of practice with that employer and the last day somebody can sue. That’s called the statute of limitations for malpractice claims. In most states, it’s two years. If no insurance policy is in effect if a claim is made, the physician is at risk of trouble. Nearly every employer will require one of the parties to purchase tail coverage.

The need for tail coverage is simply covering that gap between the last day a physician works for the employer. And then on the last day somebody can sue them. Now, it’s two years from when the patient either knows or should have known of a malpractice incident. It’s possible to bypass two years if there’s no way for the patient to know until a few years later. I’d say most of the time if a physician is working for private practice, a small physician-owned business, group, etc. They will have to be the one that purchases the tail policy.

It’s a one-time cost, so you don’t have to pay it yearly until the statute of limitations runs. It’s just a one-time cost. As soon as you finish the employer, it covers you for that amount. There can be different lengths as far as the tail coverage policy goes. Still, often the tail coverage policy will cover a reasonable amount of time until the statute of limitations is over. Somewhere between two to five years. As far as the math equation, if a physician does have their choice of insurance products, either occurrence or claims-made. Then you need to consider the period you’re willing to be with the employer. In order to lessen the risk of paying more for the professional liability coverage.

Is There a Need to Buy Tail Coverage?

If you’re paying a third more for occurrence coverage per year. But you don’t have to pay a tail. Then it might make sense to utilize that if you’re going to be there on a short-term basis. Let’s say you’re there for two years, you’re going to pay a third more for those two years. But then you don’t have this big one-time cost at the end. If you’re in a claims-made insurance policy. And you’re going to be somewhere long-term, it might make sense to use claims-made. Therefore, your annual premium with the insurance company is cheaper. But then you’ll still have that hit on the end with the tail coverage. Which one is better? It honestly just depends upon the situation. And then indeed, it depends upon specialty.

The annual premium can vary wildly. Primary care, peds, or something that could be 6,000 a year. Whereas OB-GYN, one of the higher-level surgeons, cardiac surgeon, etc. could be between 20,000 to 50,000 a year. And then do the math on that tail coverage cost. It could be forty to a hundred thousand for their tail coverage. It’s specialty-dependent as well. This certainly is something we negotiate as it can take great resources from a physician. When we’re looking at a physician contract, you always must consider, okay, what’s most important to me. And then what areas can we work on. More comp, more time off period, better bonuses, whatever. But who pays for the tail insurance product is an essential piece for most physicians. Especially the ones in those higher-end specialties.

Can You Be a Doctor With a Felony? (Will a Medical Board ALLOW It)

In a Dental Practice, is 10 Miles a Reasonable Non Compete for a Dentist?
Scroll to top