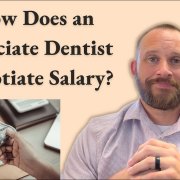 How can an associate dentist negotiate a better salary?  First, as far as compensation models go for most associate dentists, it’s usually one of three things, either just a straight based salary, I’d say probably more frequently a daily rate, and then last would be a net collections model. Let’s kind of go through the three of those, then we’ll talk about tips on how to negotiate. First, a straight-based salary. The best way to find out whether a salary is kind of, I guess, an average amount in an area is to talk to colleagues. If an associate is looking in a brand-new city, maybe try to look for job listings online and see what the salary range is that they’re listing.

Salaries will vary wildly from location to location. If you’re willing to live in an area that might not be as maybe universally desirable in a rural location or maybe somewhere that has tough weather, you’ll probably make more. Whereas if you’re maybe in a more desirable location where there’s a ton of competition that usually tends to depress salaries, at least of the associate dentist. Just having an idea of what the ongoing rate is in that specific location certainly is helpful. One of the problems is I’d say most people here are just coming out of training or moving to a new location, you’re not bringing any patients with you, so you’re just simply not as valuable. If you were moving within a city and there were no non-compete or non-solicit problems and could bring a huge chunk of patients to a practice, well, then you’re obviously much more valuable.

But I think in most situations, that’s probably not the case. In that situation, usually, there’d be ownership interest transfer. The next one is the daily rate. I mean, really, if you just do the math on, alright, well, if this is the salary, how does that breakdown into a daily rate? Then it’s an easy computation. One thing you need to think about is if there is fractional day, meaning, maybe you’re only there for half a day then is the rate just half? I’ve found some contracts where they penalize the dentist for not being there for the full day, and many times it’s not the dentist’s fault, or maybe the volume is not there or something else. Other blogs of interest include:

So, make certain that the daily rate not only is a fair market but also has either hourly or half-day, something that just states how much the associate dentist gets paid if they are not there for the full day. Lastly, net collections and it’s simple. It’s whatever services the dentist provides that the practice collects on. And then the dentist will get a percentage of that. Let’s just take, for instance, a dental associate who brings into the practice $50,000 and they’re only paid on net collections. The normal percentage will be somewhere between 30 to 40% of that amount. Now, they can also do it where they have a base salary on top of net collections. And in that case, usually, once the dentist brings in an amount that covers their salary, then they’ll get a percentage above that.

And that is lower, normally, somewhere between 15 to 25%. The percentages certainly can vary wildly as well. And that’s certainly something that the dental associate can negotiate. Negotiation is always about leverage. And as I said before if you’re just coming out of training, or you are in a city you’ve never lived before and have no established patient base, then you may not have that much leverage. Whereas if you have more experience, you’re in a specialty that’s difficult to recruit to, you have this established patient base, you certainly have much more leverage in negotiating higher daily rate, base salary, net collection, percentage, whatever. I think the most valuable thing you can do is just talk to the people that you know, and the people you train with or some mentors, and just get a feel for how these people are being compensated and how much they’re being compensated.

I find when we’re negotiating, just taking this, the compensation is the only factor that’s stupid. You need to consider, are they getting a signing bonus, or relocation assistance? Is their license and some DEA registration being paid for? What are the restrictive covenants? The non-compete, the non-solicit. Who’s paying for malpractice insurance? There are a bunch of factors that go into whether a contract is worth signing or not, and kind of a holistic, total approach needs to be taken and not just “I’m going to go wherever I’m getting paid more.” I think that’s shortsighted. Hopefully, that was helpful and gave you some tips on how to negotiate an associate dental salary.

Can an Employer Just Terminate Your Contract?

Which is the Most Frequent Reason for Revocation of a Nurse’s License...
Scroll to top