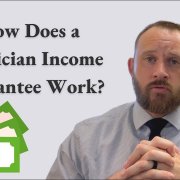 Certainly, if a physician who comes into practice is unproductive, doesn’t see as many patients as they should, like the expectation is, at some point, the employer is either going to tell the physician they need to increase the productivity. In some contracts, there’s a language that the employer can unilaterally reduce the base salary based upon productivity, or if it’s not going well, the employer could always just terminate the agreement without cause and let the physician go for being unproductive. In a normal kind of what is an income guarantee, it would normally be thought of with a hospital. So, if a physician is employed by a hospital, there will normally be a period, usually, one or two years, where no matter what happens, they are guaranteed this amount of money. And then after that period, and let’s just say it’s two years, then their compensation will shift to productivity model.

If it’s a hospital, then it would normally be RVU based. Let’s just say someone is a hospitalist and they’re coming into work. They may just be given a flat base and say, you must work this many shifts a year. And then after that, it might be a productivity model. Now, using a hospitalist is probably a bad idea since it’s pretty volume-dependent and the hospitalists can only do so much. Let’s use a different example because that was a terrible one on my part. Let’s just say they’re in primary care. They are employed by the hospital, they set up a clinic in the area, it takes usually 12 to 18 months for a practice to reach maturity. And so, they say, no matter what happens, you’re going to get $200,000 in year one or two.

And then after that income guarantee period is over, we’re going to compensate you due to how productive you are. So, they will track your RVUs for the first year or two. Most places would do it. They would say, alright, you generated this many RVUs in year two, which then equals this amount of money, so then we’re going to give you a base of this in year three. And then, if you generated a certain amount of RVUs over that amount, then you’ll get compensated either monthly, quarterly, or annually. Most places would do it quarterly. I mean, it is frustrating for a physician to work all year and must wait the entire year to get any kind of productivity bonus. I would suggest making certain it’s smaller than a year, but quarterly is kind of a normal amount. Other blogs of interest include:

Is there any negotiation in an income guarantee? Well, certainly you can negotiate the amount of the income guarantee, but if you’re in a health network or a hospital, you’re not going to be able to change the model with how they compensate all their physicians. You should be aware of how it’s calculated, different places do it very differently. You should talk to someone who can walk you through, alright, here’s how this is going to work after the income guarantee ends.

And then this is what you should expect, during the kind of moving forward after that. If you have a job that you come into and its immediately productivity-based, that’s a big red flag for several reasons. Well, one, let’s just say, if it’s RVU based, it’s a little fairer because in work RVUs, you’re paid for what you do, not what’s collected. If you’re in a pure net collections-based agreement, it usually takes 60 to 90 days for a normal accounts receivable cycle. You could be working for 30 days and not see a dime. And then it slowly trickles in and builds up over the course of the year to 18 months, as I said.

How do RVUs Work?

Let’s say write-offs, reductions by insurance companies just straight defaults by the patient in paying, all of those will go towards the physician doing the work, but not getting paid for it.  RVU kind of takes that away. It’s only based upon what the physician does. In this case, as I was saying before, each encounter is given a number and then that number is then multiplied by what we’d call a conversion factor. Then that’s how much the physician will get paid. Let’s just do primary care for instance. Let’s say the median RVUs generated in a year for primary care is roughly between 5,000 to 6,000. If they were being compensated annually based on RVUs, you’d take 6,000 RVUs and you multiply those times the conversion factor, and then that’s what they would make for the year.

That’s not uncommon either. Anyway, that is what an RVU is for a physician. Once again, you only care about the work RVU. There are multiple ways of compensating from it, but hopefully, that’s kind of like a bare-bones analysis to at least give you knowledge about it.

Can a Physician Work Locums with a Full Time Job?

What is a Physician Recruitment Agreement?
Scroll to top