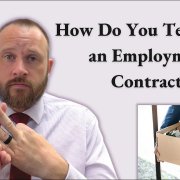 How do you terminate an employment contract? There are several ways of doing it. One, if there is a fixed term, let’s just say it’s a two-year initial term, and then there’s no language where it automatically renews, if no one decides to renew the contract, it ends at the two-year period, the contract is terminated. Both parties can move on. It doesn’t happen very often in that scenario. There’s almost always going to be language in there that has automatic renewal. Meaning, if they have a two-year initial term to the contract, it’ll just state, if neither party terminates the agreement, it’ll automatically renew for successive one-year periods.

In that scenario, when there are automatic renewals, the contract can be terminated in, I guess three other ways. One is mutual termination. Both parties say, for whatever reason, this isn’t working out, we’ll terminate the agreement, we can both move on. The second way would be for cause. In the contract, there’s to be kind of a list of reasons that a party can terminate the agreement. And then there’s also going to be language that states if that party thinks the other party is in breach of contract, they’re not fulfilling a term of the agreement, it’ll usually state that party then must send written notice to the other party saying, you’re in breach of contract. And then normally, there’d be cure period. And that just means the party has a certain amount of time to fix whatever the breach is, usually somewhere between 15 to 30 days.

And so, if that party fixes the breach, then the other party cannot terminate the contract for cause. Some reasons you can terminate a contract for cause are compensation, maybe the employer isn’t paying as much as they stated they would, or they’re not paying on time. There’s a miscalculation of a bonus. In that scenario, the employee would say, hey, you told me you would pay me this much. You’re not paying me this much. You are in breach of contract. You have a short period to make it right as far as payment goes. And if you don’t, I’m going to terminate the contract for cause. And in that scenario, normally, that would mean the party could terminate it immediately after the cure period ends, and the other party didn’t fix the breach. In healthcare professions, if a physician or whoever the healthcare provider is, loses their license, then they’re not insurable, they can’t be given malpractice insurance, they are on some exclusionary lists, they get a felony. Other blogs of interest include:

In those scenarios, there’s no chance that they can continue working as a physician. And then the employer would have the opportunity to terminate them immediately for cause. Those are some scenarios for for cause termination. And then, the last way to terminate an agreement and probably the way that’s utilized 95% of the time would be what’s called without cause termination. In that scenario, it just simply states that either party can terminate the agreement for any reason, with a certain amount of notice to the other party. Usually, somewhere between 30 to 90 days, depending upon the profession. Healthcare professions tends to be a little bit more because there is continuity of care issues with patients, whereas maybe some executive sales, that type of thing, it’s much less because there’s not as big of an ethical or I guess medical problems with transitioning patients.

They don’t have to worry about that. Let’s say someone has a 30-day without cause termination, then that party just provided written notice to the other party, hey, I’m going to terminate the agreement, pursuant to the contract, I’ll work out my 30 days, at the end of that, I’m moving on. That’s how most contracts are terminated without cause. Now, some things to think about if it is terminated without cause are one, there should be language that states how the professional will be paid after the contract terminates. Maybe they have a yearly bonus, quarterly bonus, or a monthly bonus. Are they still paid that bonus if the contract is terminated? If not, then some strategy needs to be utilized by the professional, and they shouldn’t give notice until after they’ve received whatever the last bonus is to make certain there are not some shenanigans on the part of the employer. In most scenarios, if a provider or professional gives without cause termination notice, there’s also language that states the employer can simply state, you must go home.

We don’t want you to work here anymore. However, they do have to pay out whatever that notice period was. So, if it was 30 days, the professional would still be paid whatever their base was for that 30-day period. But when there are bonuses involved, it gets a little bit trickier. And so, you want to make certain that there’s language in there that protects the professional and makes certain they get their bonus. Some ways of doing that would be putting language that simply states, the bonus if earned, will be prorated based upon where they are in the contract year. So, let’s say, someone has end of the year bonus, they’ve earned it through six months, they give notice so that bonus will then be prorated to what the kind of yearly bonus would be to those six months, something like that.

So, those are the ways that a contract can be terminated. Either the term just ends, mutual termination by the parties, breach of contract, and for cause termination of someone isn’t fulfilling the terms of the contract or without cause termination where either party can terminate the agreement at any time, for any reason, with a certain amount of notice to the other.

Claims Made vs Occurrence Malpractice Insurance

What Should be in a Telehealth Contract?
Scroll to top