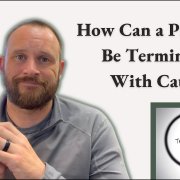 What are the ways a physician can be terminated with cause?  In any contract, there are several mechanisms to terminate a physician. One is without cause which means either party can terminate the agreement with a certain amount of notice to the other party. Usually, that’s 60 or 90 days. That’s where most terminations are going to occur, and it’s almost always on the physician’s side as well. The physician, for whatever reason, is unhappy, has a better opportunity, or must move for the family. They give without cause termination, they work out the 60 days, and then they move on. Also, in every physician contract, there’s going to be what’s called “with cause termination”.

And there are two different parts of that: one, you’ll have a termination with cause that can be an immediate termination, meaning, the employer doesn’t have to provide any notice to the physician, or two, it can be with cause termination with the need to cure. And so, in a contractual context, a cure period is simply a period where if someone is alleging the other party in breach of contract, they usually get somewhere between 15 to 30 days to fix the breach. And then, if the breach is cured, they move on and they can no longer terminate the contract for cause. I would say, the normal thing in people’s minds as far as with cause termination are kind of the following and I’ll just go through what is listed in nearly every physician contract.

In the contract, it’s going to say, the employer can terminate this contract with cause with no notice required, and it’s usually at their discretion. So, they don’t have to fire the physician immediately, but they can. Kind of the obvious things are, if the physician loses their medical license, they can no longer practice as a physician, an obvious termination. They lose their DEA registration, so they’re no longer allowed to prescribe drugs. That’s a problem for most physicians. And so, that would be immediate termination. They die, they are permanently disabled, they are uninsurable. Meaning, if a physician continuously gets judgments due to medical malpractice, at some point, the insurance companies are going to say, we’re not going to insure you anymore. And no employer is going to keep a physician that doesn’t have malpractice insurance. Other blogs of interest include:

So, it’s another thing they can terminate immediately. Generally, a felony conviction is another thing. Sometimes, a state medical board will have laws that state, if the physician is convicted of a felony, it’s an auto revocation of their license. In other states, it must go through an investigation for them to determine if that’s necessary. But for the most part, if you’re convicted of a felony, that’s something that the employer can terminate you for. Substance abuse, there might be either a moral clause or a clause about the physician being impaired in some way. I mean, for the most part, people think of impairment as far as substance abuse, drugs, alcohol, something like that. But like prescription drug abuse, it could also be psychological if someone is having mental health issues and they’re unable to practice safely. That could be an impairment.

And then, I said permanent disability before. If you’re in a specialty that requires, say a surgeon requires your hands and you have nerve damage in your hands, then you can’t be a surgeon anymore. Well, obviously, they can terminate the contract for that. As I stated before, most of the time, if there’s some other kind of breach, let’s say a physician is refusing to take calls, maybe they’re acting inappropriately towards staff, they’re not fulfilling the required days, hours, that type of thing. If there’s volume expectation and they are far below that, in those scenarios, the employer will usually give, as I said before, a written notice that they have a certain number of days to fix whatever the issue is. And then if it’s fixed, the employer still could terminate them, but they would likely do it without cause since there are no workarounds to terminate them for cause. So, that’s a little breakdown of how physicians can be terminated with cause, for cause, however, you want to characterize it.

Will I be Paid my Bonus if I Terminate the Contract Early?

How Should a Resident Physician Look for a Job?
Scroll to top