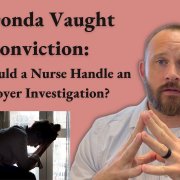 Last week, a criminal decision sent shockwaves throughout the nursing industry. RaDonda Vaught in Tennessee gets convicted of negligent homicide and another charge. And now, as someone who represents nurses. I can tell you that the industry is concerned about the repercussions and whether other states will start doing the same. I don’t want to get into details about the Vaught case necessarily. Here are some tips for nurses on how to handle an issue. This is at the employment level. And then maybe later talk a little bit about the board as well. We all know errors occur in nursing. It’s just a fact.

And if anyone works in a hospital, they have been around a situation like Ms. Vaught. In that case, she gave the wrong medication, resulting in the patient’s untimely death. If you work in a hospital, you’ve been around this before. What are some tips on handling a situation if you commit an error like that? Let’s go through that. A nurse provides the patient with the wrong medication. Then, someone will find out about it, or the nurse will, at some point, recognize their mistakes. Sometimes, they don’t. And then, what will happen is an investigation will begin with the employer. And so, the employer is going to pull the medical records. They’ll verbally ask the nurse what happened and talk to witnesses.

Who Is In Charge to Investigate the Hospital Incident Report?

And at that stage, there’s not much a nurse can do beyond just letting them know what happened. And certainly, if there is an error, that has the possibility of getting reversed somehow. There’s a possibility of saving the patient. The nurse must come forward and admit to the error. Now, what the nurse doesn’t have to do is the important part of this blog. What will happen during the investigation? The administration will do one of two things. They’ll put the nurse on administrative leave while they’re doing an investigation. Or they’ll continue to allow the nurse to work. And then, at some point, will bring them in for, you could call it a formal meeting.

If you are put on administrative leave by the hospital, nine times out of 10, they will fire you. So, there is no benefit to the nurse participating in anything else. Let’s say they put the nurse on leave, and then two weeks passed. They’ll call the nurse back and say, hey, we’d like to talk about the situation. Be casual about it. And then the nurse will come in, and then they’ll be ambushed by:

It will likely feel like an interrogation as the nurse. But in that scenario, I would suggest not going back.

If you’re on admin leave and they call you in. They’re calling you to likely fire you. And there is no benefit to the nurse from putting down anything beyond what happened directly with whatever the error occurred.

How Should an Employee Handle Workplace Investigation?

They’ll also generally ask the nurse a written statement going through what happened in their own words. Do not write that written statement. You are not required to write statements or say anything to the employer. Only bad things can come from that. And normally, they’ll ask the nurse to come in and say, let’s talk about the situation. And they’ll say, oh, can you put this down in writing? Then once they have all of that, they’ll say, by the way, we’re firing you. So, don’t participate in the process. If you’re sure you made an error, it led to some very bad negative outcomes. And they put you on leave. They are very likely going to fire you.

Now, I know nurses. They want to keep their jobs, advocate for their positions, or talk their way out. None of that matters. The employer doesn’t care. From the employer’s perspective, they’re trying to defend themselves and throwing the employee under the bus. They don’t care. The difference between airing on the side of getting rid of a nurse versus keeping them around. Even after an error, they’ll always get rid of the nurse. Just think about it this way: a nurse makes an error, and the patient dies. The patient sues the employer. How does it look from the employer’s side? If they knew of an error that led to the patient’s death. Then continued to employ that same nurse without any negative repercussions moving forward. It’s very unlikely to happen.

Regarding the employment process, do absolutely everything you can to save the patient if it’s a reversible error. If invited for a formal interview, I would decline. If they put you under admin leave, I will wait until they decide to call you back. And then, ultimately, you should resign. I mean, that’s the smartest way of handling the situation. Suppose you wait until they terminate you on any future employment applications. They will ask about reasons for leaving a job. And instead of being able to say, you resigned, it’s going to say, my employer terminated me. And the same goes for the board. I’ve had nurses who get in trouble when they have fudged their reasons for leaving a job. And then, the board will find the applications for their new jobs.

And they’ll see that the nurse lied about why they ended their old job. Then they used that to discipline the nurse. So, those are my thoughts on how to handle a negative error at the employment level.

What Happens When a Nurse Is Reported?|Nursing Report

What happens when a nurse gets reported? First, I’m not going to talk about what happens when a nurse gets reported to a nursing board. I will talk about all the places you can report a nurse. And then, there are some things to consider regarding handling those situations. Now, first, this is not going to be state-specific. I’m giving general information that a nurse could use in almost any state. Rules can vary from state to state. But this will be a general discussion of what happens when they get reported.

Places or Agencies Nurses Can Be Reported To

What Can a Nurse Do if a Patient Reports Them Over an Incident?

What can you do if you get reported to any of those? Well, it would depend upon the organization what you should do. If a patient complains, the employer approaches you and asks you what happened. Then there are no problems talking to them about what happened. Now, I guess it would depend upon the severity of the nurse’s actions or an incident. I’ve had a couple of previous blogs that went through what happens for an employer investigation. And there are times when it doesn’t make sense to say anything. Still, if it’s a minor disagreement, some patients/family members will never be satisfied with the care provided.

If the nurse didn’t do anything wrong in a situation like that, then feel free to discuss that. And if the nurse screwed up somehow, it might make sense to be quiet about it and not give a statement.

If the police are involved, you must find an attorney first. I understand that some people believe they can talk their way out of things. Don’t do that. Suppose you get contacted by any police department or even the Attorney General’s office in your state. In that case, a criminal investigation is underway. They will talk to you, pretend to be your friend, and say, why don’t you tell me what happened here? And then they’re going to use all those things against you. Do not say anything if you have contact from the Attorney General’s office, a police department, a detective, or an officer. Call a certified criminal defense attorney and have them represent you wherever you live.

Hire a Board Defense Attorney

Not spending the money on that is extraordinarily done. That’s what you need to do. Suppose you’ve had adult protective services complaints, child protective services complaints, or whatever the name of it is in your state. In that case, it might make sense to involve an attorney who has done administrative hearings. I find the investigators; many of those departments almost always find abuse. So, talking to an attorney who handles those things in your state would make sense.

Now, as far as the nursing board goes, it depends on the complaints. Sometimes, there are terrible complaints, like there’s no basis or fact for them. The board will likely dismiss them quickly or dismiss them after a brief investigation. Is an attorney necessary for that? Probably not, but there are certainly instances where an attorney with experience with the board of nursing could assist you. I would contact them before you respond to the nursing board at all. There are plenty of great nursing board attorneys throughout the country. It would help if you found somebody with legal matters experience with your board in your state.

How to Find a Good Defense Attorney?

One way of finding that would be going through old agendas. Almost every state requires open records. And so, a post of any board meeting from a governmental agency must be posted. And they do that through the minutes, which summarize what happened during a board meeting. Then the agenda, which is what we’re going to discuss during the meeting. Most states will post if someone is represented by counsel and the minutes and then who that is. It’s not a bad idea to look in the old minutes in your state to see the attorneys representing most of the nurses. And then that’s usually a good indication that they at least have experience. I can’t say if they’re good or not, but at least they have experience handling the nursing board.

So, that’s what happens if a nurse gets reported to various agencies. It would help if you always were careful about what you’re saying to anyone. The court can use your words against you. And it makes sense to involve a professional with experience handling matters across all those areas.

How is Physician Productivity Calculated? | RVU and Net Collections

Can a Resident Physician be Fired? | Terminated Residency
Scroll to top