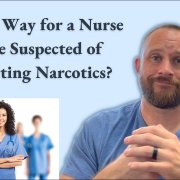 What is the easiest way for a nurse to be suspected of diverting narcotics? What are the things that raise red flags and can cause a big headache for someone who isn’t diverting narcotics but might be doing some of the things that someone who was might do? So, I came up with a brief list of things that I see the most amongst my clients that are accused of diverting. And then we’ll just kind of go through those and maybe talk about how to fix some of those problems. Before we even get into that, nurses do divert narcotics. That’s not a myth. It happens. It probably happens more frequently than you would expect. It can happen for several reasons.

Most of the time, it’s due to self-medication. The nurse has substance abuse issue, they have access to the narcotics, and then it’s just a simple way for them to use the narcotics and for whatever reason, either emotional or physical or whatever it is, it starts with, well, I’ll just do this once. And then, well, I’ll do it a couple of times, then it kind of spirals. It will always get to a point where the nurse can simply no longer hide what they’re doing, or they get sloppy or whatever the reason is. But very rarely would a nurse be able to do this long-term without being caught. Let’s go through some of the red flags of what an employer would look for in determining, or even alleging that a nurse is diverting narcotics.

Well, the first one is simple. Not wasting with a witness. Very simple. In almost every scenario, the nurse needs to waste with a witness. I find some of the excuses are I’m too busy, I couldn’t find somebody on the floor, this is what we normally do on this floor, maybe someone swiped in and then left or something like that. There’s always an excuse as to why it couldn’t have been done, but if the employer runs an audit of all the medications that the nurse pulled and it doesn’t show that every single medication that is needed to be wasted with the witness was, that’s a big red flag. Other blogs of interest include:

The nurse will, at some point, likely be talked to about that. And they’ll have to explain why they didn’t waste with a witness. Just because everyone does it as well, or this is how we normally do it on the unit, those are not valid excuses. Not documenting correctly is a violation of every state’s nurse practice act. And so, simply the nurse must waste with the witness whenever possible. The next thing is pulling more narcotics than your peers. And how the employer does this is they’ll do an audit of all, let’s just take opiates, for example. All the opiates that a nurse prescribes or administers to all the patients. Maybe there’s scanning order and they’re allowed to take out of the pyxis and give to the patient a certain amount every four hours or whatever it is, the nurses that tend to be on the very high range compared to their peers of administering or pulling narcotics are simply going to be red flagged.

And so, the employer will use what’s called standard deviations. If a nurse has a certain number of standard deviations above what the average nurse is in her unit, then that nurse will likely have a more complete audit done on their entire administering history. And at some point, they will have to talk to the employer about why they’re pulling so many opiates. The next thing would be not documenting the administration of the medication. It’s a simple one. If you pull it and you don’t give all of it, one, you need to waste it. Two, you need to document that you gave it. A very simple one, but if a nurse has a bunch of pulls from the pyxis but it doesn’t show that they administered it or wasted it, that’s a big problem for the nurse.

So, you must make sure that it’s documented that it’s been administered. Next, removing meds on patients that aren’t the nurse’s. I guess the most normal excuse for something like this is, well, while I was helping a colleague, she asked me to pull whatever, and then I gave it to her to give to her patient, just can’t do it. And unless there’s policy at the facility that says it is fine, which I would highly doubt, the nurse cannot pull meds from patients that aren’t there. It’s just a huge red flag. The next thing would be pulling meds from a different unit. Obviously, if you are working on one unit, then it shows up that you’ve been taking meds out of the machine on another unit, that’s a big red flag. I guess a scenario where they were completely out of, I needed medication on one unit, and they jumped over somewhere else.

But once again, just a big red flag. And these are all things that nurses who are diverting either do or in combination with some of them. Then the last thing would be too many overrides. Many nurses simply say, well, the machine doesn’t work correctly, or to get to my patients, I must do a lot of overrides or something like that. Too many overrides are just a huge red flag as well. I know it’s standard practice on some units. I know some facilities have float nurses that kind of assist whatever necessary and so they must do a lot of overriding, but still, it’s a big red flag. So, you just shouldn’t do it. Just to go over briefly, the main red flags are wasting without a witness, pulling more than your peers, not documenting, removing meds from another unit, removing meds from a patient that isn’t yours, and then too many overrides.

Some way to avoid a board complaint or an employer investigation would just simply, make certain that you’re doing all these things. And then more importantly, if something is preventing you from doing that, roadblock that the employer has put up or something is not working, or the machine is malfunctioning, whatever it is, absolutely immediately let the charge or the supervisor or the owner, whoever is there, know what’s going on so that the nurse cannot be the one that’s given the blame for the situation. In those scenarios, absolutely go find someone, let them know what happened, send an email, and do something to document that this thing happened. And it wasn’t because I’m trying to do something sneaky.

Is a Physician Letter of Intent Binding?
Scroll to top