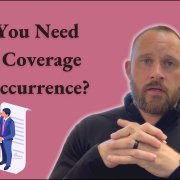 Do you need tail insurance if you have an occurrence-based policy?  In short, the answer is no, you do not. Let’s talk about the differences between the three types of professional liability insurance for physicians, and then what scenario you may need tail coverage. First, many large hospitals or healthcare networks are self-insured. Under that scenario, the physician would not need tail insurance. We’ll discuss that in a different blog. The two main types of professional liability insurance also known as malpractice insurance that we’re going to discuss are occurrence-based policies and claims-made policies. A claims-made policy means a policy must be in effect when the claim is made.

It’s possible if a physician is working for an employer, and then the relationship ends that a patient could still file a suit. Let’s say a year after the physician left and no longer works there. And so in claims made policy, a policy needs to be in effect that covers that gap between the last day that you work for the employer and then the last day that someone can sue you. That’s the statute of limitations. In most states, it’s two years and it’s two years from when the patient either knows or should have known of the malpractice incident. So, it can go past two years, but for the most part, two years is a good standard. It does vary from state to state. In that scenario, if the policy is claims-made, and the physician leaves the employer, then someone must pay for tail and secure a tail coverage policy.

And every physician employment agreement will state who is responsible for tail insurance. If it doesn’t, that’s a problem and you need to put the language in there. I’d say it’s probably 50/50 whether a physician must pay for tail or not. If they work for a hospital, almost none of the time they will have to pay for tail. If they work for a private physician in practice, most of the time they will. The tail cost, a good rule of thumb is it’s usually about an average of twice what the annual premium is. The annual premium is paid annually to provide coverage to the physician. So, when the physician leaves and a tail policy is bought, generally, it’s about twice what their annual premium is, and it’s a one-time payment. Other blogs of interest include:

You don’t have to pay it every year. Just pay the one fee covered for the rest of the period until the statute of limitations runs. Is tail insurance needed for an occurrence policy? As I said before, no, it is not. An occurrence policy simply means a policy must be in effect when the incident occurs, so obviously, the incident is going to occur during employment when someone is working for an employer. After that, if you’re under an occurrence policy, and the physician leaves, no tail insurance is necessary. One question I get a lot is, well, what is the difference between the two price wise, and then why would you go with one over another? Well, first, occurrence on average is about a third more expensive per year than a claims-made policy. Let’s say you have a $6,000 premium for a claim-made policy. Then it’d be around 8,000 for occurrence.

It’s kind of a math equation. Also, with claims made, usually, the premium will go up over time slightly. So, if you have the choice between occurrence or claims made, it probably will depend upon how long you anticipate being with the employer, and whether paying the third each year makes more sense than paying a little bit less per year but then having to pay that big chunk on the end of it. Most private physicians in practices will not provide occurrence insurance. The obvious reason why is that it’s more expensive. And so, if the employer is going to make the physician pay for tail, then there’s no reason for them not to use a claims-made policy. That way, they not only don’t have to pay for tail, but they pay a third less for insurance on an annual basis. That’s kind of a little rundown on tail claims made in occurrence space insurance. You do not need to pay tail if you’re under an occurrence policy.

How Long to Respond to a Physician Job Offer?

What is an At-Will Physician Contract?
Scroll to top