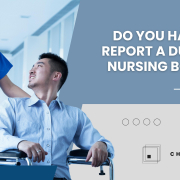 Does a nurse need to report a DUI to a board of nursing? First, this is not state-specific. I’m not going to talk about any state’s specific laws as far as criminal reporting for a DUI. This is more of what a nurse needs to analyze and determine whether they must report something or not. Then the consequences of not reporting something. First, you need to determine whether the board requires you to report a charge or a conviction. There are some states that require a nurse to report a criminal charge. Then there are others that only care if the nurse is ultimately convicted. Therefore, they wouldn’t have to report anything that was either dismissed or they went to trial or something like that.

Arrested or Not, is it a DUI Charge?

So, what is a criminal charge? Let’s just say you’re out Saturday night, have a few drinks, get a DUI, the officer hands you a ticket, and there’s an arraignment date. Which means your initial appearance in front of the court to enter a plea, you’ve been charged with the DUI. In that scenario, and if the board required you to report a charge. Then you’d need to submit written notice to the board that you had been charged with the DUI.

Now, there are scenarios where a nurse can be pulled over and given a DUI but not specifically charged. In those scenarios, maybe the nurse refused to do a breathalyzer, and they took the nurse’s blood, and they’re waiting on the blood test results to determine whether to charge the nurse or not. Maybe it didn’t involve alcohol, it was a drug DUI. They once again got a blood test and were, I guess, testing it to determine whether the nurse was impaired or not, or had a level of impairment in some way.

There are scenarios where you could have been pulled over and even potentially arrested but not specifically charged at that point. At some point, when the blood test results come back, and if they’re at the level and they deem they want to charge the nurse. The nurse will get a notice from the court that they have been charged. And then at that point, that’s when they can report it to whatever board they’re in.

Convictions and the Nursing Board

Now, as far as a conviction goes, I know many states will either require the nurse to immediately report a conviction. And then I’ll talk about that in a second, or sometimes they’ll say on renewal, you’ll need to report any conviction. So, that’s another thing you need to figure out. If it is a conviction, do you have to report it immediately? It’s usually a 10-day window. Or do you have to report it upon renewal? For most states, that’s two years. As far as a conviction goes, most boards consider a conviction any kind of plea agreement, obviously any kind of result from a trial that’s a guilty verdict. Most will consider the pretrial diversion program guilty in some respects. For instance, if you’re a nurse that got a DUI and then you sign a pretrial diversion, most boards would consider that reportable in some way.

Consequences: Could Cause You Your Nursing License

What are the consequences of not reporting a DUI? When you initially apply for your license for any board, they’re going to do a criminal background check. Then if they required a nurse to report any misdemeanors involving substance abuse, which many of them do, and you didn’t report it, and then they do a criminal background check, and it pops up, well, they’re going to think that being deceitful and trying to hide your criminal past, and then that could be grounds to either deny the application or give the nurse formal discipline.

That’s one thing to think about is you must read the specific wording of the application if you’re going to apply for a license anywhere and then determine, alright, does this fit whatever happened to me? Some states will have a time period. So, they’ll say, no, we’ll only go back ten years, whereas others, it’s completely open-ended, and you could have to report something from 30 years ago, theoretically.

If you are currently licensed and you decide not to report something when you should have, either immediately or upon renewal, that certainly could be grounds for formal disciplinary action if the board was to find out about it at some point in the future. Every renewal would be considered another kind of count of lying to the board. Let’s say you got a DUI, you didn’t report it, the board found out ten years later, you’ve had five renewals since then, they could say, well, you violated it every two years. So, you had multiple violations beyond just not reporting it. Then that doesn’t even get into the underlying kind of investigation that will likely follow to determine if that nurse has substance abuse issues, habitual problems with drugs or alcohol, that type of thing.

In Your Defense, DUIs need to be Reported

So, for the most part, absolutely, you’re going to need to report a DUI. It’s going to depend on if you were charged or convicted. Now, are you going to lose your license over a DUI? Well, for the most part, it’s very unlikely that a nurse would lose their license just for a single DUI. Now, if a nurse has had three DUIs, they were on probation, they get another DUI, they violated whatever consent agreement they’re on, obviously, that could certainly lead to the revocation of a license.

But if it’s a first-time kind of regular DUI, not a crazy BAC, it’s extraordinarily unlikely that you would lose your nursing license. DUIs, honestly, are probably the most common criminal issue that we deal with. Domestic violence, theft, shoplifting, and DUIs are the three most common criminal cases that we deal with for nurses. Kind of lower-level stuff, but there are still things that could concern any board of nursing.

Self Reporting a DUI for an Arizona Nurse

Here at Chelle Law, we know nurses are an integral part of our world. They are people who care and act with wonderful intentions to help others. They handle complex issues and provide care to patients who, sometimes, aren’t always the easiest to deal with. But what happens when enjoying a drink or two ends up in a DUI? Is this the end of a great career? What will be the outcome of such a conviction for a nurse? Of course, that depends on the Arizona Board of Nursing (AZBON).

Individuals who receive a DUI will not only risk their professional license but incur the regular penalties for a DUI conviction. Discipline will be meted out under local and state laws. This means you could face jail time, community service, fines, and possibly mandatory rehab treatment or AA meetings.

How quickly do you need to report a DUI?

All DUIs must be reported to the Arizona Board of Nursing within ten days of being charged. Besides handling a possible conviction in a criminal court, nurses must also quickly notify the AZBON in writing. If you’re facing a DUI it is not a good idea to avoid reporting the violation. Should the Board find out by other means, the discipline you would face would be more extensive. If you have been arrested, we recommend contacting an attorney immediately.

It’s important for any nurse to know, that if you’re facing charges, you must report them to the AZBON within ten working days. This includes misdemeanor and other criminal charges, offenses, or citations. Drug and alcohol-related offenses include driving under the influence of alcohol or prescription drugs, the sale of or the use of drugs, distribution, growing or manufacturing of drugs, and possession of drugs or drug paraphernalia.

Some cases do not need to be reported to the Board. This is because they are low risk and do not involve patient care. These cases include:

But of course, anything related to drug or alcohol charges would not come under this heading.

How Having A Lawyer Can Help

If you have a DUI, don’t panic! We understand it may be scary not knowing what the effects of a DUI on your nursing license may be. Perhaps you think your license is facing suspension or revocation. Although Arizona has some of the harshest penalties in the U.S., it is possible to resolve the issues without losing your license. After a misdemeanor DUI charge or conviction, it is not necessary to lose your nursing license. The fact is, if the offense is a first offense, and you don’t suffer from substance abuse issues, the consequences won’t be as dire. However, if the violation is being prosecuted as a Felony Aggravated DUI, it is possible a nursing license will be revoked in Arizona.

Having a lawyer can help you in self-reporting a DUI to the AZBON.  Your attorney can assist with obtaining all reports from the police to the results of all blood and/or breath tests and send them to the Board. Having an attorney will also help to represent you in front of the Arizona Board of Nursing should you need to go to a hearing. It is important you have an attorney on your side before speaking with an investigator of the AZBON. Your attorney can help you work with the Board to help lessen the possibility of losing your license and the disciplinary action you may face.

So, What Crimes Should a Nurse Report to The Arizona Nursing Board? A.R.S. 32-3208 requires that licensees and applicants for licensure report misdemeanor criminal charges involving conduct that may affect patient safety or a felony to the health professional’s regulatory board within ten working days after the charge is filed.

It is illegal to commit a felony without reporting it within ten days of committing the crime. The following types of misdemeanors or other criminal offenses/charges are crimes that have been determined by the Board to be reportable pursuant to A.RS § 32-3208:

If you’re interested in learning more about Arizona Nursing Board Criminal History laws and how to protect your rights, set up a consultation with Chelle Law and our Arizona Nursing Attorney. Reach out to us today.

How to Negotiate a Dental Associate Salary? | Dental Clinics
Scroll to top