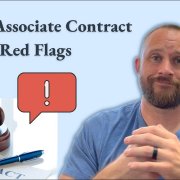 This just simply means that either party can terminate the agreement at any time with a certain amount of notice to the other. Normally, somewhere between 30 to 90 days. The reason why this is important, and I find this especially important for dental associates for whatever reason. Without the ability to terminate the contract at any time, let’s just say the dental associate has a two-year contract and they cannot terminate without cause, you’re essentially stuck there for two years unless the other party breaches the contract. There are plenty of scenarios where if a dentist associate is on net collections, volume, compensation, the owner will generally, I’d say, overestimate what the associate will make. And so, they can get into a job if they’re not paid a daily rate or a salary, it’s more of just eat what you kill and get a percentage of whatever is collected and the volume simply isn’t there and you’re not making nearly as much as you expected.

You still would have to play out the rest of those two years. And that is a situation no one wants to be in. So, first thing, absolutely makes certain there’s without cause termination at any time. Sometimes, the employer will try to say, you can’t give notice in the first year or you can’t give notice in the first six months or whatever. No, anytime, if you start, you give notice, you do your, whatever the notice period is, move on. Absolutely necessary. Two, compensation. If you are a dentist and you are being paid on either net collections, encounters, some kind of volume metric and you are not 100% certain that the volume is there for you, you need to be very careful about taking that job. Other blogs of interest include:

A daily rate or a base salary, especially in the first year or two insulates the dental associate from just getting completely screwed by an employer that is, I guess, unwilling to make income guarantee and then is bringing in a dentist, but in that circumstance, only pay them based upon volume metric. Just like in the example I just gave, if a dentist starts and their compensation is based purely on production and the production is completely out of their hands, they’re not doing the marketing, it is on the employer to drive the business, it’s a problem.

So, for anyone who’s new, maybe just out of training or you’re relatively new, it’s important to have guaranteed salary or daily rate. And then once you’re there and maybe you’ve been there a year or two, and you see that the volume is there, maybe potentially you can make more under collections model, well then, talk to the owner about switching. But at the very beginning, I find most places that try to lure dental associates in with big numbers. It almost never shakes out that way. Another big red flag is the non-compete. This is one thing that varies from state to state. Each state kind of has its own view on what’s a reasonable non-compete. Non-competes are enforceable, and almost every state, California, New Mexico, and Massachusetts are three of the few states where they’re completely unenforceable.

But for most states, it must be a reasonable length, usually about 12 months, sometimes they’ll try to do two years and then some kind of reasonable geographic restrictions. Usually somewhere between 5 to 15 miles. If you have a five-year, 50-mile non-compete, that’s crazy! You don’t want to sign something like that. You want it to be no more than a year, and then no more than, I would prefer 10 miles from your primary practice location. Many of these big corporate dental offices have multiple locations in the area and will state it’s 10 miles or whatever the geographic restriction is from every place they own even if the dental associate didn’t provide care or work in that location. No, you can’t agree with that. It needs to state that it will only apply to the locations where the dentist provided care and even then, try to limit it to no more than two locations. In big cities, obviously, corporate dental conglomerates continue to gobble up some of the dentist owned practices.

And so, if someone is 10 locations in a city and it’s 10 miles from 10 locations, you’re going to be knocked out of your city. So, what’s in the non-compete is certainly important. And then last and I’ll just touch on this briefly, the benefits. If a dental associate is an employee, the employer should pay for your license, DEA registration, and continuing education. If you’re moving from out of state, reasonable moving expenses, and reimbursement are normal things that an employer should pay for. So, think about that as well.

Can an Employee Terminate a Contract at Any Time?