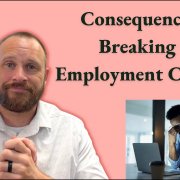 What are the consequences of breaking an employment contract? The first issue is what is considered breaking a contract? I think some people think just exercising their right to terminate the agreement is breaking the contract. I don’t think of it that way. When I think of breaking a contract, meaning, you don’t give proper notice, you just simply leave the job without following the terms of the agreement. In that scenario, what are the potential consequences? Let’s say professionals at a job and it’s not working out for whatever reason. In almost any employment contract, there’s going to be a section that kind of discusses the ways the contract can be terminated. And then within that section, there’ll be what’s called without cause termination. Without cause termination simply means either party can terminate the agreement for any reason at any time with a certain amount of notice to the other party, normally somewhere between 30 to 90 days.

Let’s just say the professional walks in on Monday and says, I’m leaving tomorrow, but they had a 60-day without cause termination notice requirement. Well, if that does happen, the employer could then potentially go after, and when I say go after, I mean legally go after them, sue them for breach of contract. And when you sue somebody for breach of contract, there can be several damages involved. There could be lost profits for what they would’ve expected that employee to generate during that 60-day period, they could also go after the replacement value. If they had to find short-term replacement that was very expensive, they could go after the employee for that. There could be damages for recruitment fees in trying to find that employee’s replacement. They could maybe go after them to get back a signing bonus, relocation assistance, licensing fees, and credentialing if they’re a healthcare provider.

So, yes, if you do break a contract, meaning, you just simply walk out and don’t fulfill the terms of the agreement, there could be several things that the professional could be liable for. Now, a lot of times when I’m having a consultation with somebody who is unhappy, they just say, well, these are all the things the employer is not doing right. They’re not paying me my bonus in time, or they’re making me work more than that in the contract or I’m having to take twice as many calls as they said I would. Okay, well, just because they’re doing it or they’re breaking the contract, doesn’t mean you can just leave and then cite that as a reason. If you believe the employer is in breach of contract, you need to provide them with written notice that states you are in breach of contract for these reasons. Other blogs of interest include:

And then normally, there’d be some language that states you can cure the breach, usually somewhere between 15 to 30 days. And if the employer does fix whatever the problem was, then the employee cannot terminate the contract for cause. If you can terminate it for cause, usually, it can be immediate, meaning, you give the employer written notice that they’re in breach of contract and if the employer does nothing, then it would be the option of the employee to terminate it immediately. That is simply different than the employee just breaking the contract. You must go through it to protect yourself under the terms of the agreement. And even if the employer is not fulfilling their terms, you still must give them notice. You still must wait for the cure period. Then if they fix whatever the problem was, you still can’t just break the contract and jump immediately to a new position.

To protect yourself, read the contract, see how the contract can be terminated either for cause or without cause, and follow the requirements. If you must give 60 days’ notice to terminate the agreement without cause, you must give 60 days’ notice or you can potentially open yourself up for a lawsuit in damages. The last thing, there will be a section in the contract that states how effective notice can be given. What I mean by that is it will state to give proper notice. You must send either certified mail, hand delivery, a written letter to the address of the business or the attorney of the business or whatever. If you don’t give effective notice, meaning, you don’t follow that notice section, it would not be considered a proper termination. And in that scenario, the employer can simply say, well, you owe us another 60 days until you give us effective notice or whatever.

So, follow the termination section, and follow the notice requirement. In that way, you can avoid having to either pay anything back to the employer or must pay damages for lost profits, recruitment fees, and the things I went over at the beginning of the video.

Can an Employee Terminate an Employment Contract?

What Happens if you are Fired as a Physician?
Scroll to top