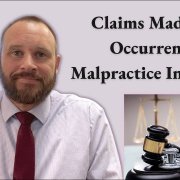 What is the difference between claims made and occurrence-based malpractice insurance?  There are three main types of insurance for physicians. One, if they’re working for a big hospital network, that hospital may be self-insured. And in those scenarios, 9 times out of 10, the physician does not have to worry about purchasing tail insurance. The next one is a claims-made policy. These are used mostly by private physician practices, and then if it’s a claims-made policy, someone may need to purchase tail insurance. And then the last one is occurrence.

In an occurrence-based policy, no tail insurance needs to be purchased. Let’s break down claims made first then occurrence. Let’s start with claims made. A claims-made policy simply means a policy must be in effect when the claim is made. And how this affects a physician is they can terminate a contract, and then there could be some gap in between the last patient that they see and then the last day they can be sued by a patient. In most states, the statute limitation on the malpractice claim is two years from when the patient either knows or should have known of the malpractice incident. If a physician leaves and then gets sued a year after they leave the employer, they need a policy in place that protects that gap. And that’s called tail insurance or extended reporting, gap insurance, but nearly everyone in the field calls it tail insurance.

Who purchases it, and how much does it cost? Let’s go through that. The employer will almost always pay for the underlying policy. Obviously, there’s an annual premium where payment must be made each year so that the physician is insured. That’s almost always paid by the employer. Now, if it’s a claims-made policy, who pays for tail insurance is simply based upon the language in the employment contract. I find most of the time, if a physician is working for private physician-owned practice, maybe a little smaller, under 10 physicians, the physician is going to be the one responsible for paying the tail insurance. If it’s a claims-made policy from a hospital, then I would say, most of the time the hospital pays for the tail if necessary. Other blogs of interest include:

How much is tail for a claims-made policy? A good rule of thumb is it’s about twice what the annual premium is. So, it can vary. The longer the physician is with the same employer, the more expensive the tail is going to be. I would say, it starts maybe around 150% of the annual premium and can go all the way up to 300% in some scenarios. Let’s just do some math quickly. Let’s say a physician is in primary care, I’d say usually the average is around 6,000 for their annual premium. If the physician was responsible for tail, and they’ve been with the employer for two or three years, their tail cost is going to be about twice that. So, they’re going to pay around $12,000 for tail. That’s a one-time payment. It’s not paid every year.

You just pay one amount and then it covers the physician for that gap that we spoke about. Certainly, this is something the physician can negotiate prior to signing the employment agreement. For some specialties, this can be an enormous chunk of money. OB-GYNs and some of the surgical specialties can have annual premiums of 20, 30, 40,000. And so, their tail costs can be above 50,000 up to 100,000 for an OB-GYN, which is a significant amount of money for anybody. And that’s certainly not an amount of money that most physicians want to pay once they leave. So, who pays for that is certainly a big point of negotiation? Now, sometimes, an employer is willing to split the cost based upon how long the physician has worked there. Maybe if a physician has worked for the employer for four years, they’re willing to either pay the entire amount or maybe it’s tiered.

So, if they stay for one year, the employer will pay 25% and then stay for 2 years, 50, 75, 100%. That’s one way of working it if the employer is not willing to pay the entire amount. That’s what claims-made insurance is. You do need tail insurance for that. And then depending upon the language in the contract, it will determine who pays for it. In occurrence-based insurance, you do not need tail. An occurrence policy simply means a policy must be in effect when the malpractice incident occurs. In this scenario, someone is employed and there’s malpractice event while they’re working for the employer, there’s an occurrence policy, they’re good to go. Even if someone files a claim after they leave an employer, they’re still covered because there was a policy in effect when the claim occurred.

Why would you get claims made? Well, it’s price. An occurrence policy is generally about a third more expensive than a claims-made policy per year. If you add a $6,000 annual premium under claims made, you’d have about an $8,000 annual premium for an occurrence policy. Which one is better? Honestly, it’s not usually up to the physician. It’s just they’ll have to use whatever their practice is using at the time or what they’re offering. If a physician does have the ability to choose one over the other, then they need to do some math, and it’s going to be based upon how long they think they’re going to be working for the practice. Let’s just do a scenario where a physician has a $10,000 annual premium and they’re going to work for an employer for five years.

Instead of spending 20,000 for tail, it’s 15,000 more by occurrence. So, they come out ahead using occurrence in that situation. And that would be a scenario where maybe the practices we’re willing to provide occurrence-based insurance, but you must pay the difference between what it would’ve been if it was claims made versus an occurrence policy. And so, in that scenario, you just must do the math and figure out, alright, how long do I plan on being with the employer? What’s the tail cost likely going to be? How much more will I have to pay? If it’s an occurrence policy, then figure out what works best for you. Normally, a scenario where the physician would have the ability to choose one over the other is if they were an independent contractor. In those scenarios, they’re going to be responsible for paying the tail if it’s claims made, and they’re going to be responsible for paying for the underlying premium.

So, it’s up to them which policy they choose. And so, in that scenario, it’s kind of up to them how to decide what works best for them.  If they’re joining the private physician-owned practice, as I said before, most likely it will not be up to them.

Can an Arizona Teacher Break Their Contract Mid Year?

How do you Terminate an Employment Contract?
Scroll to top