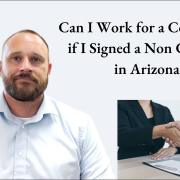 Can you work for a competitor if you’ve already signed a non-compete with your current employer in Arizona?  The answer to that is it depends upon the language in the non-compete. In Arizona and in any state where non-competes are enforceable for that matter, there are three components to any non-compete. You have the scope, so what does it prohibit you from doing, the temporal restriction, so how long it lasts, and then the geographic restriction, in what area can you not practice your profession? And let’s kind of break down each one. Most non-competes will state specifically what you can’t do. So, it’s important for several reasons.

Let’s just say you’re a doctor. You don’t want the non-compete to say you can’t practice medicine within whatever, for how long, in whatever the geographic restriction is. Let’s just say you’re an internal medicine physician. Well, you have other options. You could do urgent care, primary care, do work in the ED, you can be a hospitalist. You have a bunch of other options. And so, you want the non-compete to be specifically tailored to what you’re doing for that employer. So, if you’re a hospitalist, you want the contract to only stop you from being a hospitalist within the restrictions. And then let’s just say you’re in sales. You are in software sales. You don’t want the non-compete to say you can’t work in sales at all in any industry. You want it to say you can’t work within software sales and even more specific to what you’re doing would be better.

And that way, you have other options. Anytime you’re negotiating a non-compete, it’s always about giving the professional more options once the contract is terminated. And those options are other industries or potential areas of practice that you can get into for that short period of time, shortening the length of time that the non-compete lasts, then obviously shrinking the geographic area where you are restricted from practicing. The second thing, as I stated before, is the time restriction. Most Arizona courts have held that one year is a reasonable amount of time. Anything above that could be iffy. It does consider the totality of the non-compete. So, the look to, alright, what is the scope of it? How long does it last? What’s the geographic restriction? And so, maybe a non-compete has a very small geographic restriction, but maybe it’s a little bit longer on average. The court may say, well, even this out and we would consider this reasonable.

There is no specific statute or code in Arizona that says, this is exactly what a non-compete has to say, here’s the length, it must be, here’s the geographic restriction. That’s not how it works. The courts have had several physician-related non-compete cases. Farber is the name of one of the main cases, and they found that one year and five to 10 miles from the physician’s primary practice location was considered reasonable and enforceable. And then lastly, the geographic restriction. This also varies greatly depending on what you do. For a doctor, five to 10 miles from one to two locations would be considered reasonable. If you’re in sales, it could be an entire county, it could even be large swaths of the entire state, which might be considered reasonable as well. It’s just dependent upon what you’re doing for that specific employer. Now, to get to the question of: can they stop you from working for a competitor?

Can The Employers Stop You from Working for a Competitor?

I guess that question would mean you have a non-compete that simply states you can’t work for company X, and it has nothing about what you can’t do, for how long, or in what specific area. Most of the time it would very likely be unenforceable. However, I can’t say that with absolute certainty because it would depend upon the employer. If the competitor just has one physical location and it is within a certain geographic radius, okay, that might be considered a reasonable request. There are plenty of healthcare contracts that state the physician can’t work for a healthcare network for the restrictive period regardless of where they’re located, whether that’s enforceable or not, but if it says you can’t work for an employer who has hundreds of locations throughout the state and would completely knock you out of the entire state, well, no, that most likely wouldn’t be considered enforceable.

It gets trickier when you get into sales because sales can be anywhere, especially when you’re doing kind of software-related things and not hardware related. Those get tricky because you could theoretically sell to anybody anywhere within the state. Whereas if you’re a doctor, unless you’re doing telemedicine, you have to physically be somewhere. So, it’s easy to carve out the geographic restriction for them. So, can they stop you from working for a competitor in a non-compete in Arizona? Yes, they can. However, it must be tailored narrowly, and then each situation has to be taken into account.

How Long Do Non-Competes Last in Arizona?

Scope of the Non-Compete Agreement

If you’re in sales, for instance, it may say you cannot practice in sales in the industry of whoever you’re working with. That is one way that an employer can get sneaky in keeping the scope as broad as possible. And I’ll give an example. Let’s just say you’re a salesperson and you’re working for a software company. You don’t want the non-compete to say you can’t work in sales for one year and within Maricopa County or something like that. You want it to say you can’t work in computer sales and even better, whatever the specific thing that you’re selling for that individual employer. And for a physician, for instance, let’s say you’re an internal medicine physician. You can do primary care, you can do urgent care, you could do ED, you could be a hospitalist. You don’t want the non-compete to state you can’t practice medicine at all.

Duration of Non-Compete Agreements in Arizona

You want it to state you can’t practice as a hospitalist, for instance, if you’re working as a hospitalist for an employer. So, keeping the scope narrow is important. Now, the length of time, which is the point of this blog. Most non-competes would be considered reasonable and enforceable that is one year in length. It’s not uncommon for some employers in Arizona to push it out to two years. Anything beyond that, I do not think would be enforceable, and anything between one to two years also is on the edge. But it’s not just if one section is completely unenforceable, the entire thing would be unenforceable. They look at the totality of the non-compete agreement. So, is it a very narrowly tailored scope? Maybe it’s 18 months and then maybe the geographic restriction is very small compared to normal.

Geographical Scope of the Non-Compete

And then a court may say, okay, well, that’s reasonable. The aim is for no more than one year and no more than two years. For any of my healthcare-related clients, one year is the max that we’ll agree to. And then last is the geographic scope. This really is dependent upon what you’re doing. For healthcare providers, five to 10 miles from your primary practice location would be considered reasonable. However, if you’re in sales, certainly five to 10 miles would not be the geographic limitation for you. It would most likely be either by county or even by large sections of the entire state. Sometimes they’re statewide as well. It just depends. The specific industry that you’re in will dictate whether the geographic scope is considered reasonable or not.

Now, how do you negotiate? Well, obviously you need to do it before you sign the employment agreement or independent contractor agreement. I find that some employers will state, you know what, just sign this. We’ll never enforce it, don’t worry about it. Or sign it, and then we’ll negotiate it upon the termination of the agreement. Obviously, don’t do that. Never take the word of the employer. You need to negotiate it in advance of signing. And then, you need to figure out what is going to work best for you. If you want to decrease the mileage from, let’s say 10 to five miles, well, figure out, are there opportunities in that five-mile ban? If there aren’t, then you need to focus on other parts of it, either narrowing the scope or narrowing the time. Every individual is different, and their needs are different.

So, you need to identify, alright, this is exactly what I need if I must sign a non-compete agreement to make this job worthwhile. Can an employer force you to sign a non-compete at all? Yes, they can. They can make it a contingent part of the agreement. And if you do not agree to sign the non-compete, then it’s extraordinarily likely that they’re just going to move on and find somebody else who wants to sign the non-compete. But no matter what, no job is worth it if the non-compete is really going to put a, I guess, hardship upon the professional. Meaning, let’s say you have established ties to the area, you grew up here, you have family here, and you absolutely cannot move once the contract is terminated. That could be the absolute number one thing that you attempt to negotiate when looking at the agreement, it could even be more important than compensation. Once again, the professional dictates what is most important. Hopefully, that was helpful. A little breakdown of how long, an average non-compete can be in Arizona.

However, one word of advice, do not sign a non-compete, just expecting it not to be enforced. As I tell almost any client, you must be willing to go through whatever you ultimately sign. Even if we think it won’t be enforceable, you may have to litigate or go to arbitration to get there, which most people don’t want to do. So, make sure that you negotiate in advance. I just had a doctor last week come to me. And the employer said, well, we want you to sign this non-compete. Still, in the past, they’ve amended it after the relationship has ended. And I said, look, that’s just hollow talk. There’s nothing to hold them to that if you sign the non-compete, and you should not rely upon their word that they will change it after the fact. It just doesn’t make any sense to me.

How Long Do Non Competes Last in Arizona?

What is a Full Time Contract Position?
Scroll to top