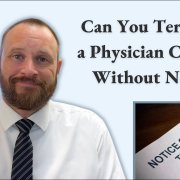 Can a physician terminate a contract without notice? In my mind, that just simply means can they just leave a job without any amount of notice and then move on without repercussions? The answer to that is certainly you can leave without notice, but you are opening yourself up to liability for a few reasons. The first reason is almost any physician contract, there is going to have a clause that’s called without cause termination, or sometimes it’s called for no good reason. And in that scenario, the contract will state that either party can terminate the agreement with a certain amount of notice to the other party. So, you don’t need a reason to terminate the contract, no one has breached the contract, or maybe nothing is wrong.

It’s just the physician who wants to move on. Or maybe the employer is laying off the physician due to lack of volume or something like that. The contract will state either party can terminate the contract for any reason. However, they must provide a certain amount of notice. Most of the time it’s either 60 or 90 days. That’s kind of the standard. In that scenario, let’s say the physician wants to leave. They would simply, in writing, provide notice to the practice that simply says, pursuant to the contract, I’m giving you 60 days’ notice. My last day of providing care will be X date. And then you move on. Now, just because you terminate the contract without cause doesn’t mean there aren’t some problems for you or at least issues that you need to deal with when it’s over with.

Some things that will follow when you terminate a contract without cause, or at least usually follow, there will be a restrictive covenant, and that is either a non-compete or non-solicit. If you terminate the contract without cause, they’re still going to apply. And so, you need to think about, alright, well, what are the restrictions on my practice after I leave the employer? Many employers will have repayment obligations for bonuses they’ve paid out. If you start a job, then you leave within a year or two, the employer is going to prorate that bonus based upon how long you’re there. Let’s just say you were given a $30,000 signing bonus and your initial term was three years. Then the employer may say, one-third of that $30,000 is forgiven each year. So, if you were to leave between years two and three, you’d owe them back $10,000 on the contract ended. And same goes for relocation assistance. They gave you some money upfront, usually, it’s forgiven over time, then you’d have to pay back whatever the outstanding amount is. Other blogs of interest include:

Another thing to think about if you terminate a contract without cause is if you have productivity bonus in the contract, either maybe net collections or RVU. Many of them will state if you’re not employed at the time that the bonus is given out, you’re not going to get the bonus. Or maybe if it’s like an annual bonus, they won’t prorate it either. The timing of when you give that notice is important so you’re not losing out on whatever productivity bonus you earned. And then kind of the last thing that can usually follow is if you have a claims-made policy, who’s going to pay for tail insurance. If the physician is responsible for paying tail, they must pay that amount prior to the contract ending. And that can usually be somewhere between ten all the way up to a hundred thousand for OB-GYN or maybe a high-level surgeon.

What happens if you don’t provide notice to the employer? In the contract, as I said before, there will be clause that says you can terminate the contract without cause with this amount of notice. So, what happens if you don’t give any notice? You just walk in on a Monday, you say this job sucks, I’m out of here. You walk out and that’s it. Well, you’re in breach of contract. What are some things that can happen when you breach a contract? Well, the employer could assert damages. Meaning, lost revenue for the patients that you would’ve seen that they don’t have coverage for, recruitment fees for replacing the physician, maybe expenses that were incurred when there’s no physician to be there with staffing or vendors, things like that.

And so, how that would work is, the employer would literally sue the physician for breach of contract, and then they would claim those damages and then they would fight it out in court, or if there’s an arbitration clause, they would arbitrate. It’s a terrible idea to just walk out on an employer if certainly there’s a without-cause termination clause in there as well. Another consideration is continuity of care for your patients. If you were just to leave a job without providing any notice, what’s going to happen with your patients? Now, when you are employed, although they may be your personal patients, they are the patients of the employer. So, the physician couldn’t just up and take all the patients with them to a new practice due to a couple of reasons. There’s probably a non-compete and non-solicit that would prohibit that in some way.

Now, patients can choose who their provider is, and I’m not going to get into that right now. But the continuity of care aspect is something that needs to be considered. Are there bridge scripts written if they’re maybe psych patients that are absolutely in need of medication? Has there been any opportunity to refer the patients out to someone else? Is there someone in-house the employer that can take over the patients? Not only could you get sued for damages, but if you just up and leave all the patients in the lurch, then you’re just asking for a board complaint as well, and nobody wants to deal with their state board. I promise you I’ve represented hundreds of professionals before the licensing boards, and it’s not a fun process for a provider. So, can you terminate a contract without any notice? Yes, but it’s a terrible idea that could open the physician to a multitude of problems.

What are Types of Medical Malpractice Insurance?

How is Tail Coverage Calculated?
Scroll to top