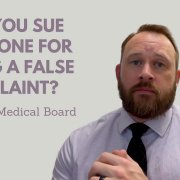 Hi, my name is Robert Chelle with Chelle Law, and my firm represents physicians before the Arizona medical board and the osteopathic board as well. We’ve been representing healthcare providers in Arizona for a long time over a decade now. And one thing that comes up semi-frequently is the question, can you sue someone for filing a false board complaint in Arizona? Pretty simple question. The answer is yes, but obviously, there are some caveats that we’re going to go over right now. Every board has a statute, they’re in the Arizona revised statutes, which lay the groundwork for what the board can and can’t do. In the statute for the Arizona medical board, there’s a section, I’m just gonna read it, that says any person or entity that reports or provides information to the board in good faith is not subject to an action for civil damages.

So breaking that down, basically, anyone who files a board complaint in good faith can’t be sued for civil damages. The most important part of that section is good faith. What is good faith? What that means is if someone honestly believes that there was some kind of bad conduct on the part of a physician or that the physician did something that in some way was illegal or violated statute, that they’re kind of immune from civil damages. The only way that a physician could sue someone for filing a board complaint is if it was false and in bad faith. People can file a good faith complaint with bad intentions, right? You could have a patient who just wants to stick it to the doctor, a competitor physician who’s doing the same,  an employer who is somehow upset about maybe their relationship terminating or something like that.

If any of those people filed a good faith argument, meaning they believe that whatever the physician did could violate statute, they’d be immune from a civil lawsuit. If you’re gonna sue the person, then you have to prove that they acted in bad faith, meaning, they knew that what they were alleging is false or potentially they made up falsehoods and used that for a basis of a complaint. There was a case in the mid-two thousand that kind of worked its way up to the court of appeals in Arizona. And basically, it was one physician who filed a board complaint against a competitor physician, they’re in the same specialty, fighting for patients in the same area, and alleged a number of things. And the physician who had the complaint filed against him filed a lawsuit against the other doctor stating that the complaint was not submitted in good faith.

Are There Any Mistakes Physicians Make?

And therefore he suffered some damages and I’m just gonna read what the counts of that lawsuit are. Right? One, the alleged defamation, false light invasion of privacy, wrongful institution, and maintenance of an administrative proceeding, intentional interference with prospective contractual to business relationships, and injurious falsehood. So, five counts. What the court held though, was the first count. Was the complaint filed in good faith or not? And the court said, yes, it was. They’re saying even if, maybe some of the things that the person who filed the complaint, alleged were untrue, they believed they were true. They made at least a minimum amount of verification of the facts. And therefore the complaint was filed in good faith. And so the physician who had the complaint filed against him couldn’t recover any damages.

We have a case currently with the Arizona medical board, we’re representing a client, obviously, I won’t get into the details of it. However, I can give broad strokes. In this case, a patient alleged that our client gave them on a certain date, a specific procedure. And then there was a negative outcome during the procedure. After a review of the medical records, our client never saw the patient on the date alleged, never even provided the procedure alleged by the patient. And then obviously the bad outcome didn’t occur either. So, did that person file a complaint in bad faith? Well, we believe, yes. As I stated before when looking, whether a complaint’s filed in good faith or bad faith, you need to look at, well, did the person who filed the complaint make any attempt to verify any of the information?

In this case, obviously, no. What could someone do to verify information? Well, they could call the office and verify when they saw the physician, they could request the medical records and review those, talk to people involved. A base minimum amount of effort needs to be given to verify allegations. And if the complainant, the person who files a complaint, doesn’t do any of that. Then that certainly allows whoever had the complaint filed against them to argue that it is filed in bad faith. This is a fairly nuanced topic, but in summary, can you sue someone for filing a false board complaint in Arizona? The answer is yes you can, under certain circumstances. But it’s an interesting topic to kind of discuss. As I stated before, my firm Chelle Law represents physicians before the Arizona medical board and osteopath boards. If you have any questions, we’re certainly happy to answer them. Just give us a call, the number is listed below in the description, or you can visit us on our website, Chelle law.com, C H E L L E law.com. Hopefully, this is informative. If you have any suggestions for other topics you want me to go over, please comment and I’m happy to do that. So anyway, thanks for listening, and take care.

What Happens When a Doctor in Arizona is Under Investigation?