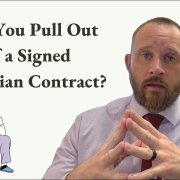 Can a physician pull out a signed contract? This is a big one. Many of my consults are about this issue. We’ll break down what it means when you sign a contract and then what are your options after the fact. Yes, you can pull out of a signed contract, however, there may be some repercussions involved with that. When you’re going through the job search process, maybe they’ll have you sign an offer letter, maybe they won’t. But at some point, you’re going to get an employment agreement, then smartly should get it reviewed by an attorney. And then after you’ve worked out the details of what you want in there and you signed the agreement, then obviously there’s an expectation that you’re going to start the job whenever the start date is. However, there are circumstances where a job opportunity and a signed agreement at one point made a ton of sense, and then maybe six months later, it doesn’t make any sense at all.

There are different things to think about when you want to break a contract. First, there may be language in the agreement that goes through exactly what happens if a physician doesn’t start in time. For instance, if the employer paid residency or fellowship stipend, there will be language in there about how that needs to be repaid if the physician doesn’t start in time. And then other contracts may have penalty associated with signing the agreement and then pulling out and not actually starting the job. I mean, I’ll be honest, it’s rare to see language like that. Most places do not put that language in the contract; however, some do. And then there will be a monetary amount set. When someone is in training, let’s just say, they’re PGY-3, they signed a contract at the beginning of the year.

Then they’re going to start in July, August, somewhere around there. Three months later, there’s a family emergency, not going to be able to start the job. And then the contract states, if you do not actually start providing care for us on the start date listed in the agreement, you owe us $10,000 or $20,000. In that case, you agreed to the contract and it’s clear what the repercussions of them not starting and so, you would owe them that amount. Now, unless this employer is a heartless bastard, if you have an actual family emergency or medical illness for yourself or a family member and it just absolutely can’t happen with you starting the job, I wouldn’t be surprised if the employer would actually go through with enforcing that penalty. Other blogs of interest include:

If you’re just breaking that contract because you have a better offer, they’re paying more, a higher bonus, or whatever. That’s why the provision is in there. And it’s in there for a couple of reasons. If a physician employer is hiring a recruiter, then they must pay for that. Once they have a signed contract by a physician, then they’ll probably start the credentialing process because that can take a decently long amount of time in some states. They’ve filled out those applications, paid for the application fee for the credentialing, maybe they have also started the privileging process if you’re having to get privileges at a hospital nearby, and then, more importantly, they’ve stopped recruiting for the position. If they absolutely need somebody in August, they have a position locked down, well, they’re not going to keep looking for another physician.

And so, if someone pulls out two months before the job is supposed to start that practice, that healthcare network, that hospital can be in a difficult position if they have a volume need or maybe they’re replacing a physician who is leaving and then that person who’s signed the contract just says, I’m not going to start, I’m moving on somewhere else. The employer could theoretically come after you for the recruitment fees, the credentialing fees, maybe some kind of damages for lost revenue. Maybe if you pull out the day before you’re supposed to start and they’re relying upon the collections that they would receive from your practice. Now, it would be very unlikely for a practice or an employer to come after the physician for those types of damages.

Honestly, it would be like one in 10,000 or probably just those people who broke the contract. It would not happen very often, but it could, so you need to know the repercussions. Can a physician break a signed contract? Absolutely they can, but there may be negative outcomes associated with that. I find that the best strategy in dealing with this is just being completely upfront with the employer and just saying, look, circumstances have changed, and these are the reasons why they’ve changed. And I really appreciate the interest that you showed me. I appreciate you providing me with a great contract. I understand that I signed it, but look, if I start this job, I’m just going to give notice as soon as possible, or maybe I’ll even give notice before the contract even commences, and then there’s nothing you can do about that.

Every contract is going to have without cause termination. That’s kind of the leverage point there. Nobody wants to bring in a physician who doesn’t want to be there. It’s a pain in the ass for everyone. As I said, every contract will usually be 60 to 90 days for without cost termination. And so, maybe if the employer is like, no, you absolutely must start. Then you just give notice on the first day you finish out your 60 to 90 days and then you leave. Nobody wants to go through the hassle of that. Most places will be willing to certainly let the physician move on. However, as I said, there may be a penalty associated with that.

What are Restrictive Covenants in a Physician Contract?

How Long to Respond to a Physician Job Offer?
Scroll to top