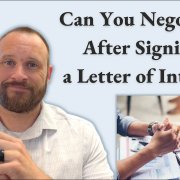 Can a professional negotiate after signing a letter of intent?  In short, yes, obviously, you can. Let’s talk about what a letter of intent is, and maybe the differences between that and employment contract, and then the areas of negotiation after that. A letter of intent also called an offer letter is simply a brief letter that outlines the main terms of the employment relationship. Normally, it would be the term of the agreement, so how long it lasts, if there’s without cause termination, what the notice requirement is, any kind of compensation detail like base salary, maybe some kind of productivity, commission-based, net collections, those details will be in there.

Maybe a brief description of the benefits: health, vision, dental, life, disability, retirement, that type of thing. And then, if there are any restrictive covenants if there’s a non-compete, a non-solicit, something like that. And if they’re a healthcare provider, if there’s kind of what malpractice insurance is offered, and if they must pay for tail insurance. There’s just kind of a brief description of the main points of the contract. And so, the employer, if they do make the professional sign a letter of intent in advance, once they get those locked in prior to offering an employment contract, many employers will just go straight to the employment contract. Maybe they’ll have a brief discussion with the potential employee about, alright, here’s what we’re thinking about all those things. And then if there is verbal agreement from the professional that says, yes, I’m okay with those.

Let’s move forward with an employment agreement. The employer will then present the employment agreement and then negotiation can take place. If you have reached an agreement on the terms of an offer letter or a letter of intent, you certainly can negotiate once you receive the employment contract for several reasons. If the offer letter briefly describes the terms of the employment relationship, when you see the actual language, many times, it can completely change what you were expecting. For instance, if it simply says, there will be a non-compete in the agreement, doesn’t give the description, and then when you read the terms of the non-compete, instead of expecting maybe a one-year non-compete with a 10-mile radius, it’s a three-year non-compete with a 50-mile radius. Other blogs of interest include:

So, that substantially changes in whether an offer is worth it or not. And many times, if there is bad language in the agreement, it can shift the compensation as well. For instance, let’s say a professional is okay making 200,000 a year, but then they have these bad restrictive covenants after the contract ends, then 200,000 may not be worth it for them. Maybe they’ll say, look, if I’m going to accept these restrictive covenants, then I need more compensation during the year to make it worthwhile for me. Although you’ve decided and reached an agreement on the terms of the offer letter, it doesn’t mean that you can’t go back to the employer unless it specifically states in the offer letter or the letter of intent that it is binding, which very rarely would happen.

Normally, that would only happen in maybe an academic position. You’re free to negotiate all the way up until signing the employment agreement. Now, it may tick off the employer that you agreed to essential terms, and then after the fact, you came back at them and said, I know we agreed to this, but we need to revisit this. However, no professional wants to enter an employment relationship where they’re unhappy with the terms. I find it’s much better to risk-taking off the employer with terms that are favorable to the employee versus just accepting an agreement that you’re unhappy with. And usually, that’s going to spiral. Let’s just say, alright, well, I agreed to terms in the offer letter. It does change once I read the actual employment agreement. And then at that point, I’m like, ah, I don’t want to go back to them.

I’m just stuck with it. Well, you’re going to have, or at least you will likely have at least some kind of negative attitude that spills over once you begin with the employer. And maybe you’re always thinking, ah, I’m underpaid or this non-compete is bad, or the benefits are below what I was expecting. So, even if you risk the employer maybe being annoyed by continued negotiation, the professional is free to continue, and they should. If it’s a reasonable offer and the salary is good, the bonus structure is good, and then you just continuously come back to the employer asking for more and more, at some point, they’re just going to yank the offer and move elsewhere. That’s always kind of a consideration when I’m talking to a professional about negotiating a contract is, yes, we want to ask for more, but it needs to be reasonable.

If you’re asking for insane increases in certain things, many times, I can just tell the professional, look, if you come back at them with these things, they’re going to say no, and it’s likely they’re going to yank the offers just because you’re coming off as so unreasonable. So, it’s good to know what the industry standards are in all those terms. That way, when you do ask for the increases, you have some backing of, well, these are the industry standards in this. And if you don’t want to meet the industry standard, then I’m going to move on to a better opportunity. So, in short, yes, you can negotiate after signing a letter of intent or an offer letter. And in fact, you probably should. Once you read the language of the employment agreement it changes the opportunity.

Can You Reject a Letter of Intent?

How Long Does Tail Coverage Last?
Scroll to top