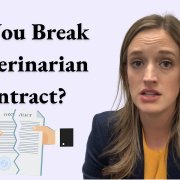 Can a veterinarian break their employment contract? And the short answer is yes, they can. However, if this means that they’re breaching the contract and not adhering to the terms of the contract, then they would likely open themselves up to liability which includes litigation costs and arbitration. The employer can ask for damages that might include recruitment costs for a new veterinarian for the practice, they may ask for administrative fees, credentialing fees, and the list kind of goes on from there. So, it’s never a good idea. We never advise our clients to breach their contract. The best way to break or terminate the contract is by doing it exactly how it’s outlined in the contract. Typically, there is a clause that’s called termination clause and there are normally three ways to terminate a veterinarian contract.

The first way is that both parties, the employer and employee, mutually agree to terminate the contract and go their separate ways. However, this is kind of rare and we don’t see it happen a lot. The second way is for cause termination. And this is typically weighted more towards the employer. The employer can terminate the contract without notice if any egregious acts happen, and typically, they are listed on the contract themselves. This might be being convicted of a felony losing your license to practice. And again, the list just goes on from there. Then the last way to terminate a contract would be for no cause and a no cause termination is typically outlined in the employment agreement and you just must give the other party 60 to 90 days’ notice, and then the contract is terminated and then you can go your separate ways.

The contract also typically outlines how to give that proper notice. It normally has an address, and you would either mail in a letter, hand-deliver it and in some rare instances, you’re allowed to email it. We also like to encourage our clients to give notice in multiple ways. That is the proper way to save yourself from liability to properly terminate a contract. But when you’re deciding to do this or break a contract, you also want to keep in mind, are there any repercussions? Meaning, do you have to pay back any signing bonuses, any relocation expenses? Typically, those have a payback provision or a forgiveness period. And if you are to break or terminate the contract within that time, you must repay those. So, that is something you want to look at in your contract and keep that in mind whenever you’re deciding to break or terminate the contract.

And then lastly, most veterinary employment contracts have a provision with restrictive covenants. Restrictive covenants include your non-compete clause and non-solicit to clients and employees. In the non-compete clause, you want to make sure that you’re not practicing within the restricted area or during your restricted time. Typically, you’re not allowed to solicit clients, which means you can’t ask them or entice them to come with you and the same for employees at your clinic or practice. In summary, you never want to breach a contract. If you would like out of it, you need to terminate it properly and give proper notice. And then you also need to remember, are there any repercussions to look for? Sort of anything you’ll need to pay back like signing bonuses, relocation bonuses, and then look at those restrictive covenants to make sure you’re not in violation of any of them.

What is MGMA Physician Compensation?

Can You Break a Dentist Contract?
Scroll to top