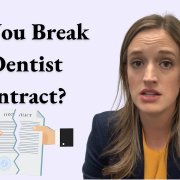 Can a dentist break their employment contract? And the short answer is yes. However, if breaking the contract means breaching the contract, and you’re not adhering to the terms of the contract, then you are likely opening yourself up to liability for litigation or arbitration. Your employer can come and ask for damages related to recruitment costs to replace you, credentialing fees, administrative fees, and the list kind of goes on from there. So, breaching your contract, if you’re going to break it is not a great idea, and we never suggest that for our clients. There is a much better way to end your contract, and that is in the termination clause that’s in typically every dental employment contract. Underneath the termination clause, there are typically three ways that you would properly terminate the contract.

The first way is if you were to mutually agree, so you and your employer agree to go your separate ways and terminate the employment agreement. However, this is rare, and we don’t normally see this happen. The second way is for cause termination. This clause is likely weighted towards the employer. In this type of clause that would be in a contract, there would be an enumerated list of sorts of offenses that would occur, and they could terminate the contract with the dentist immediately. Some examples of things on that list are, if you lose your license to practice dentistry, lose a DEA license, you are not credentialed with insurance companies: Medicaid, Medicare, and the list kind of goes on from there. And then the third way and most common way that contracts are terminated is without cause.

Most contracts state that a contract can be terminated by either party for no cause given a specific amount of notice to the other party. And typically, that’s between 60 to 90 days. So, you give your notice 60 to 90 days, then the contract is terminated, and you can go your separate ways. Another thing that’s important is that if you are deciding to terminate your contract, you want to do it exactly how it’s written and give proper notice. There’s normally a notice clause within the contract and it will state if the termination letter needs to be hand-delivered, mailed, or in some cases, emailed, but that’s rare. That’s how you properly terminate a contract. And then the next thing I want to address is that you also need to read your contract to know what requirements you have once the termination process has started.

Specifically, if you are given a signing bonus, relocation expenses, you’ll need to know if you must pay those back because some contracts have a certain amount of time that if you terminate the contract within that period, you must pay those back. So, that’s something you want to look at. And then the last thing you want to consider when you are terminating a contract is malpractice, specifically tail coverage. After leaving the employer, there would likely be a lapse in malpractice insurance and that’s typically covered by tail insurance. Some contracts address who is the party that is responsible for providing it or reimbursing the other party for it. Again, that’s something that you will want to look at in your contract and is likely detailed in that process. In summary, can you break a dental agreement contract?

The answer is, yes, but you don’t want to breach it. You want to terminate it properly by looking at the actual agreement that you had signed and do it exactly how it’s written. And then, you also want to know any consequences that would likely incur, meaning, paying back any of your signing bonuses. And then also, I did forget to mention, you also want to look at your restrictive covenants in your agreement. That’s non-compete clauses, how long is that for, what area is covered, and you want to make sure you’re not in violation of that. You also want to make sure that you’re not soliciting employees or patients, and that is likely outlined in your agreement as well. Again, it’s always important to look at your actual dental employment agreement, because it would likely have all these instances outlined in the contract on how to proceed.

Can You Break a Veterinarian Contract?

Remedies for Breach of a Physician Contract
Scroll to top