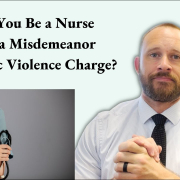 Can you become a nurse with a misdemeanor domestic violence charge? First, I use the word “charge” in the title because that’s what people search for, but I think many nurses confuse a charge in a conviction. But what most boards care about are convictions, not charges. A charge is just when you’ve been accused of a crime but haven’t been found guilty. Whereas a conviction generally is when you’ve signed a plea agreement, you’ve been found guilty at trial, or maybe even entered pretrial diversion program. Most boards consider that a conviction. So, you haven’t just been charged, you’ve been convicted of domestic violence. I’m just going to give a brief and general overview of what boards look at when they’re reviewing past criminal incidents for a nurse.

And then also, specifically, domestic violence because it happens honestly frequently. And this is going to be directed towards applicants. People that are maybe thinking about going to nursing school and determining whether they’ll ultimately be able to get a license with the board or you’ve already finished school and you’re about to apply for your first board wondering if you’ll get a license. Just to kind of allay any fears, it would be very uncommon for someone to have a domestic violence conviction in their past and still not be able to get a license with the nursing board. It would have to be either a combination of other criminal incidents or maybe you’ve had a string like 10 domestic violence convictions or something like that. If you’ve just had a couple of domestic violence incidents, it really is extraordinarily unlikely it would stop you from getting a nursing license.

What happens is, on any application, it will ask you to disclose past criminal incidents. Now, what they ask you to disclose varies from state to state. Nearly all states ask for felony convictions, and not all states ask for misdemeanor convictions. You need to check the wording of the application and then see what they asked you to disclose. Just because you didn’t or don’t have to disclose a past domestic violence conviction doesn’t mean that they’re not going to investigate it because what they’ll do is they’re going to run a criminal background check. And if that incident pops up, it’s very likely that they will reach out to you to discuss the incident. Some states don’t care about small misdemeanor stuff where there wasn’t a string of incidents, but others will want a detailed kind of statement from you about what happened. Other blogs of interest include:

And then they’ll also likely want the police report and the court documents as well. When you say domestic violence, it sounds bad, but honestly, it’s almost anything that can happen in your home. It could be between a parent and a child, it could be between a boyfriend and a girlfriend, or it could be between spouses or relatives. And in violence, it’s a broad term but it doesn’t mean there has to be hugely aggressive act towards the other. It could just be an argument that led to some screaming and then a neighbor calls the cops and then they come in and then maybe one of them or whoever you’re in the incident with was intoxicated in some way, and maybe you push them.

I mean, it could go a bunch of ways, but it doesn’t just mean there was knockout drag-fist fight that led to a domestic violence charge. I’ve had people who they’ve thrown something at their partner, and they considered that to be domestic violence. What the board will care about the most is, as I said before, how many times this has happened? How long ago it was? The longer the time between your last criminal incident and when you apply, the better. I mean, if you’ve had three domestic violence incidents in the last year, that’s going to be a huge red flag for the board. Whereas if you had one 20 years ago, it’s extraordinarily unlikely that they’re going to care at all about it.

What they will care about is whether the nurse was, or the nurse applicant was under the influence. I find most of the time, drugs or alcohol are usually involved in domestic violence incident. And so, what the board is going to be concerned about is if that is the case, it’s going to be written in the police report. I can tell you that. And in the report, it’s going to make you sound like the biggest drunk of all time. What the nursing boards will likely do is if there is a lot of detail about you being intoxicated during the incident, or if you have a string of these incidents and you’re intoxicated in every one of them, the board is going to be concerned that you have a substance abuse issue. And then that gives into concerns about providing safe patient care. The underlying domestic violence charge or conviction, as long as it’s a relatively low number, is honestly not that big a deal.

But if all of these were precipitated because of substance abuse, that’s the problem that you’re going to have. You’re going to have to explain your current use of drugs and alcohol, your past use of drugs and alcohol, any of the other incidents you’ve had, any work-related concerns about impairment. They’re going to ask you very specific questions: how often do you drink? What do you drink? How many do you drink? How does that make you feel? Have you been intoxicated in the last 12 months? And the same for drugs as well. That’s what the nurse needs to be prepared for if any of those domestic violence incidents involving drugs or alcohol is getting into those things because those are concerns that boards care about. And those are things that can stop a nurse from either getting licensed or they may have to go on probation for a period.

What will happen is if a board is reviewing an applicant, then they have a history of drug and alcohol use and the board is concerned, then they can grant the license, but also simultaneously put the nurse on probation and then they’re monitored, drug testing, AA, nurse recovery groups, supervision at work and it can last a year to 36 months. It just depends. Overall, having a domestic violence conviction in your past is not going to bar you from getting a license, most likely, however, those complicating factors with drugs and alcohol, frequency, how many incidents you had, and then how close it was in time to when you applied, those are the things that ultimately will matter. So, that’s a kind of a brief description of how a domestic violence commission can affect a nursing applicant.

What Can Disqualify You From Being a Nurse?Family Medicine Contract Negotiation Tips
Scroll to top