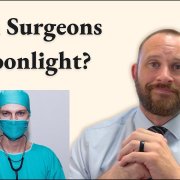 Can surgeons moonlight? Simple question. And the answer is it depends. In the employment agreement, there will almost always be a section which is called outside activities. Sometimes, it’s called exclusivity. There will be something in there that states under what scenarios the surgeon can work for a different employer even if it’s just on a part-time basis. Normally, it would state the surgeon must get written approval from the employer to practice medicine for any other organization while employed with the employer. I find it’s helpful prior to signing the employment agreement to talk about the scenarios where the surgeon would want to do other things. For instance, maybe it’s like a plastic pediatric hand specialist but they also want to do general plastics on the side or something like that.

You would want to run that by the organization in advance and just say, look, these are the things I’d like to do while employed. These activities will have no interference with my duties to the employer, I’ll do them on the weekends, I’ll do it all my days out, or whatever it is. But I would like the opportunity to keep my skills up in that area and I won’t be able to do that like, say the person is employed with a pediatric hospital network or something like that. I won’t have the opportunity to do that with adults and I’d like to keep up my skills. Most of the time, the employer certainly would be okay with it. The times where they would not be okay with that would be if the surgeon was interested in working for a competitor, even on a part-time short-term basis.

Certainly, if a surgeon is employed by a hospital network and they ask their employer if they can work for another hospital network on a part-time basis, or even maybe providing a call or something like that, normally the employer would not be cool with that. They would be concerned that the surgeon would start to build relationships and maybe eventually want to just give notice, leave and move over. That’s something that it generally would not allow. The contract is simply going to dictate under what scenario the surgeon can moonlight or work in other places. Many of the contracts will have a disclosure form as well, that states what are the things you’re currently doing. Those are disclosed and then either, approved, or disapproved by the employer. For some people, it’s a big deal. Other blogs of interest include:

Because of the scenario I just listed, they want to keep up their skills. They don’t have the opportunity to do it with that employer. So, being able to do outside activities in moonlight is very important, which is totally understandable. If you bring some of these issues to the employer and they’re just, it’s a flat no, well, that might not be an employer you want to work for. If they’re so rigid that they’re not willing to give the surgeon any opportunities elsewhere, I don’t think that’s reasonable, and it also probably means that the employment relationship moving forward or on a day-to-day basis could be strained simply because they’re unwilling to bend the rules. I mean, it’s not even betting the rules, but just making accommodation for the surgeon.

So, can surgeons moonlight? Certainly, they can. But the contract language is going to dictate whether they can or not. That kind of language may be completely absent from the agreement. In that scenario, unless there’s somewhere in there that states you can only work for us or you can only work outside, under those scenarios, if it’s completely absent, then normally, it would be fine for the surgeon to do what they want considering that it absolutely can’t interfere with their full-time job. I mean, you couldn’t certainly say to your employer, oh, I have another case somewhere else so I can’t do that. That would be a breach of contract in some way.

Will I be Paid My Bonus if I Terminate the Physician Contract Early?

What Should be in a Termination Agreement Letter?
Scroll to top