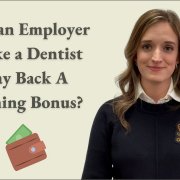 One question we frequently get from employers is, can they make a dentist payback signing bonus? And the short answer is yes. Typically, you can do that in one of the three ways. The first way is when you’re drafting the agreement, you would include a payback provision, which would simply state that if the dentist were to terminate the employment agreement within 12 to 24 months, they would pay back the entire signing bonus. The second way to do that is, if a physician were to terminate the agreement within 12 to 24 months, they would pay back the signing bonus on a prorated share. For how long they’ve been, you would take that into account. So, they wouldn’t be paying you back the full bonus.

And then lastly, it’s a little rare, but sometimes, we can include provisions that just simply states that if the dentist does not give proper notice upon termination of the agreement, typically it’s 60 to 90 days, then they would have to pay back the entire signing bonus.

Is a Physician an Independent Contractor?

Can an Employer Make a Physician Pay Back a Signing Bonus?
Scroll to top