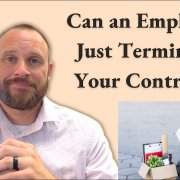 Can an employer just terminate a contract? It depends on what it says in the contract. In any employment contract, it’s going to list the term in termination. There’ll be a term section, meaning, how long does the contract last and then whether it renews automatically or not. And then there’s also a termination section, which states how either party can terminate the contract. Let’s go through that section first. There are several ways a contract can be terminated. One, if it’s a fixed term, meaning, let’s say it’s two years long and it doesn’t automatically renew. If neither party renegotiates nor signs a new agreement, then it just ends, the contract terminates. And that’s it.

If they mutually agree to part, so if one side says this isn’t working out and the other side agrees and they say, you know what, let’s just wash our hands off this and walk away. Then that’s fine if it’s through a mutual agreement. The most common way of terminating a contract is through what’s called without cause termination. And in most contracts, there’s going to be a section that states either party can terminate the agreement at any time with a certain amount of notice to the other. Usually, somewhere between 30 to 90 days is standard. Not only can the employee terminate the employment contract, but the employer can as well. Why would someone terminate a contract without cause? Well, if you’re the employee, maybe you found a better job, maybe you’re moving, you have family concerns, or you’re taking a break.

All of these things are important. And if let’s just say, they did have the two-year term, you wouldn’t want to be forced to work for those two years if you didn’t want to be there anymore. That’s why the without cause termination is in an employment contract. And then from the employer’s perspective, they don’t want to employ an employee that isn’t working out. It’s either a bad cultural fit, or personality clashes, maybe they’re just not productive. For those reasons, the employer wants the ability to get rid of the employee as well. In most employment contracts, there will be notice period. In those kinds of conditions, I just gave, none of those involved the breach of contract. That’s the last way a contract can be terminated for cause. Other blogs of interest include:

And in that case, one of the parties is breaching the contract, the other party lets them know that they’re in breach, and then generally, they have what’s called a cure period. The cure period essentially allows either party to fix whatever the breach is, somewhere between 15 to 30 days. And if that breach is fixed within that cure period, then the other party cannot terminate it with cause. Let’s just say you are an employee and you’re not being paid an agreed upon bonus. You would say, employer, you’re in breach of contract. You need to pay me whatever I’m owed. If you don’t pay me, then I have the option of terminating the contract immediately. It’s rare for a contract to be terminated for cause. Now, in some professions, it’s obvious for cause termination, let’s say you’re a doctor and you lose your license or any kind of license profession, accountant, doctor, dentist, veterinarian.

If you lose your license and can’t practice, then obviously, the contract is going to terminate. And some of the professions, if you’re uninsurable, if you lose your DEA registration, if you lose privileges or staff membership, these are all things that someone can be fired for immediately, simply because they can’t perform their job. So, can an employer terminate an employee at any time? Sure, if a certain amount of notice is followed and then the opposite can be true, the employee can terminate the contract at any point if a certain amount of notice is given. It is a huge red flag if you’re going to sign a contract for a fixed term without any ability to terminate the contract early. Many situations seem great from the outside and then you get into the actual job, and it stinks for whatever reason. And in that scenario, you want the ability to move on.

And so, without having without cause termination in the contract, it’s an enormous red flag and I would implore anyone who’s thinking of signing an employment contract without one of those to rethink. I promise you; it is a bad idea. And once again, you have promises from the employer of how great it’s going to be, but when it starts, when you’re into the practice, things can change.

Can a Resident Physician be Fired?

How Does an Associate Dentist Negotiate Salary?
Scroll to top