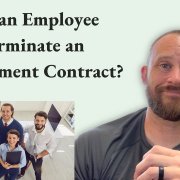 Can an employee terminate an employment contract? The short answer is obviously yes, however, it’s going to be dictated based on the terms in the contract. In any employment contract, there’s going to be a section that deals with the terms, I mean, the length of the contract and then also termination, so how that contract ends. Let’s first talk about the term of the contract. Most contracts will have a date, meaning, it’s a year-long, two years, three years, and then they’ll also have language that states if the contract isn’t terminated, it’ll just automatically renew for successive one-year terms. In that case, if a contract isn’t terminated by another way, after the initial term ends, it’ll just continue forever until terminated.

I would say rarely is there a fixed term with no language about automatic termination. If it was just a two-year fixed term, no automatic renewal, it would just end at the end of two years, and that would be it. The parties can go their own way. Now, as far as terminating the contract, the first part is just if there is no renewal, it just ends, and the contract is terminated. Second, by mutual agreement. If the employer and the employee agree the relationship isn’t working, they can always, by agreement, decide to just move on, and then that’s it, you can move on. Next would be for cause termination. In this case, this would be if someone breached the contract, there’ll be language in the contract that states all the reasons why the employer can fire the employee.

Obvious things, if you need a license to perform the activity and you lose license, or if insurance is required and you’re uninsurable, usually, there’s, I guess, vague behavioral clauses. If you’re disabled, you die, I mean, kind of standard things, but then there should also be a part that’s called a cure. And so, in that case, if one of the parties believes the other party is in breach of contract, the most common is just payment concerns. Either someone is not being paid either the amount that they were promised in the contract, or maybe the timing of the payment, or if there’s a bonus involved and there’s a disagreement over how much the professional is owed. That’s always a big, I guess, reason why there would be allegation of breach of contract. Other blogs of interest include:

Normally, it would be somewhere between 30 to 90 days. In that scenario, if the professional is unhappy, they want to move on, they give written notice saying, I’m utilizing the without cause termination notice in the contract. Then they must work out whatever, 30, 60, 90 days, and then at the end of that period, they can move on without any concerns as far as terminating the contract. So, yes, an employee can terminate an employment contract, but they must follow the terms of the agreement. Now, just because an employee terminates the contract doesn’t mean it necessarily completely ends at that point. There could be required of the employee if they terminate the contract. Many times, if a signing bonus is given, relocation assistance is given, then the employee would have to pay back prorated portion of that if they left within the initial term of the agreement. Others could have non-compete associated with it.

So, just because an employee terminates the contract doesn’t mean that the non-compete doesn’t apply. It does or at least it does in most circumstances if you’re in a state where non-competes are enforceable. If there is geographic restriction and then some kind of temporary restriction, how long it lasts, that will continue even if the employee terminates the contract. If some malpractice insurance is involved and tail insurance is needed, that will say in the contract who must pay for that. If the employee terminates the agreement, they may be responsible for that as well. Although the employee has options to terminate the agreement, it doesn’t mean that there aren’t at least some strings attached to that. Really, one of the highest priority things that I look at in the contract when I’m going over it with a professional is, alright, how do you get out of the agreement? And then what do you have to do if it ends within a certain period?

In that way, the employee can know, alright, well, I need to set aside this amount of money if I must pay for tail insurance or if I must pay back the signing bonus. So, they’re important discussions to have, and certainly the things that could be negotiated in advance of signing any kind of employment agreement. Hopefully that was helpful, kind of a little overview of termination of an employment contract.

Consequences of Breaking an Employment Contract
Scroll to top