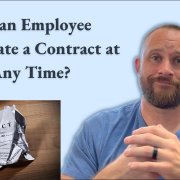 Can an employee terminate an employment contract at any time? The short answer is probably, however, it’s going to depend upon the language in the contract. Ways that a contract can be terminated: one, if there’s a fixed term, meaning, one-year, two-year, or three-year contract, and there’s no language that states the contract automatically renews, then at the end of that fixed term, if neither party is going to go or decided to sign another contract, the contract terminates, both parties can move on. That’s it. That’s one way a contract can be terminated. Two, through mutual agreement. Maybe it’s not working out, both parties are like, you know what? Let’s just move on. You can mutually agree to terminate the agreement.

Three, for cause. In any employment contract, there’s going to be a section called termination. In that section, it’s going to state how the contract can be terminated. Without cause termination is going to be, if one party breaches the contract in some way, how can the other party terminate the contract for the breach? And in most of the for-cause termination clauses, it’s going to state if one party believes the other party is in breach, they must give them written notice. And then that party usually has a period to fix the breach. We called that a cure period. Normally, it would be somewhere between 15 to 30 days. Let’s say maybe the employee wasn’t getting paid a bonus that the employer said they would. The employee lets the employer know: you’re in breach of contract, you have 15 days to pay me my bonus, or I can terminate the agreement immediately.

And then if the employer does pay the bonus, then they can no longer terminate for cause. And then they could go to the last way of terminating the contract which is without cause. In every employment contract, this is very important. There should be a without cause termination, meaning, either party can terminate the agreement at any point, for any reason, with a certain amount of notice to the other party. Normally, that notice period is going to be somewhere between 30 to 90 days. Why is this important? If an employee takes a job and maybe they were lied to by the employer, if they’re on a production-based compensation from collections, commission, percentage, encounters, healthcare RVUs, it doesn’t matter. But if someone comes in and they’re given no guaranteed base, no guaranteed daily rate, no guarantees at all, and then the volume is not nearly where they expected it would be or what the employer said it would be, and they don’t have a way to get out of a contract without cause, they can be stuck in that job for whatever the length of the term is. That’s not something you want. Other blogs of interest include:

You always want the ability to get out of the contract with a certain amount of notice in the scenario where the job simply isn’t what you expected. Maybe your boss is a terrible manager or they’re placing you in a territory or a location that you don’t want to be in. I mean, hopefully, those things would be worked out in advance of signing the employment agreement. Sometimes, they’re not. Sometimes the employer just straight-up lies to the employee and just says, oh yes, all these things are going to be there and they’re not. Without cause is the way that an employee can kind of insulate themselves from being stuck in a really bad situation for a long period of time without any kind of recourse.

So, can an employee terminate a contract at any time? Yes, if they have without cause termination, keeping in mind they must work the entire notice period. Like I said before, if it’s 30 days, give notice, work 30 days, and leave. If you were to leave before the end of the notice period, the employer could theoretically have damages and sue you for lost profits, recruiting, replacement, things like that. So, you want to make certain if you do have a notice requirement in your contract that you give the proper amount of notice, work it out, then move on and find a new job.

What Does it Mean When a Nurse is Suspended?