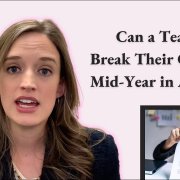 Can a teacher break their employment contract during the school year here in Arizona? The answer is they can, but they may open themselves up to paying damages to the school district. Some employment agreements for teachers in their school district have something called a “liquidated damages clause”. And it states that if the teacher breaks their employment agreement during the school year, they will have to pay that district thousands of dollars. The reason why these are included is, if a teacher leaves mid-year, the school district is left without a teacher. So, they’re going to have to recruit, to find someone to start immediately, or if not, within a short period, they’ll have to pay the substitute, also for any of those costs and if they need to advertise a position.

That’s kind of what covers that. You should always look first in your employment agreement to see if there is a liquidated damage clause in your employment agreement. Also, the teacher should know that Arizona law states that a certified teacher shall not resign after signing and returning their contract unless the resignation is first approved by the governing board. A teacher who resigns contrary to this section shall be deemed to commit an unprofessional act. And upon request of the governing board, shall be subject to such disciplinary action including suspension, revocation of the certificate as a state board of education deems appropriate. What this means is you might not only be subject to potentially paying the school district thousands of dollars. The school district can also report that teacher to the state board of education, and there could be an investigation opened on their license.

This is serious. And it’s something that is becoming more and more of concern just because of the pandemic, the shortage of teachers, and just their teacher’s salary is low. And so, if you find a district that’s willing to pay you more and maybe closer to home, I mean, there could be various reasons you would consider an offer at a different district. However, you need to make sure you do it properly by first referring to your employment agreement to see if there are any sort of damages like financially that you would have to be paying. And then also, you would want to be released by the school board because they can report you. It is a growing trend. The state board of education has reported up to 12% of their investigations, currently are with teachers breaching their contracts.

And it’s a very serious thing. So, you want to make sure, I know I said this before, that you want to do it properly. Refer to your employment first. And then, you want to get the board’s approval. I know it’s a tough decision and it’s a hard time for educators. Everything with COVID puts more stress on teachers. They’re understaffed, underpaid and could be in a difficult position and you just want to leave, but you can’t.

What is an Evergreen Physician Contract?

Claims Made vs Occurrence Malpractice Insurance
Scroll to top