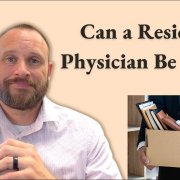 Can a resident physician be fired? The short answer is yes, they can. When a resident enters a program, that program is going to have a code of conduct, policies, and procedures. They may make the resident sign an offer letter or letter of intent. Sometimes they’ll offer a very short employment contract. It’s not even close to as complicated as what the physician will receive after they’re done with training and start their new job. Once the physician enters the residency program, problems can arise. And in any walk of life, just because you are professional doesn’t mean you’re not going to have problems. And in this case, if a problem arises to the level that the program thinks things cannot be fixed, they can let the resident go, remove them from the program, fire them, whatever you want to call it.

The main reasons for someone to be removed from the program are substance abuse issues. If they’re alleged to be impaired at work, that could easily be a reason to remove them from the program. Now, most programs will allow some period for rehabilitation, or maybe they can make them take a gap year, or some time off to get their problems under control, and then just extend the residency by that amount. However, if someone can’t get their problems under control, it’s obviously a patient safety issue. It can be let go of the program. The same can be said for mental health issues, the same scenario. There may be time to allow them to get psychiatric care, medication, counseling, whatever. However, if it continues and becomes a problem, they can be let go of that.

Clinical issue, obviously, just because someone has gotten into med school, graduated from med school, gone through their internship, and entered residency, it doesn’t mean they don’t have or at least potentially have some clinical skill problems. And so, if during training these same problems continue to arise, that can be grounds to let go of a physician who’s in residency. Two more things, boundary violations, meaning, profess boundaries. I know I had a client once who had, I guess begun a romantic relationship with his patient while he was in residency. He was in mental health and some issues popped up. He was reported to the board and booted from the residency program. So, the physician needs to be aware of the boundaries as well. Then the last thing would be dishonesty. I find, as someone who represents physicians before the licensing board here in Arizona, dishonesty is tough because it’s very difficult to show rehabilitation from dishonesty if that makes sense. Other blogs of interest include:

If you have a drug problem, a drinking problem, you go to rehab, you go to AA, you do the steps, you go to counseling, clearly, they’re getting better. Mental health, same thing, psychiatric care, medication, counseling, you’re better. Clinical issues, maybe you’ve done some continuing education, some pace programs, whatever, they can improve the skill that way. But if somebody lies, just straight out lies, it’s hard to show any way for them to improve by that. Maybe some continuing education and ethics, but beyond that, I find that most boards are like if they drop the hammer, the hammer is being dropped without any ability to improve from it if the physician is proved to be a liar or continues to be dishonest about something.

Those are the main reasons why someone would be let go or removed from residency or fired. Two things normally happen: first, if the program believes the physician can be coached up, so to speak, or improved, they put them on a performance improvement plan, corrective action plan, something like that, and then if the physician shows steady improvement, then there are no issues. If they have gone through those steps and the physician still hasn’t improved and they’ve kind of exhausted every possibility, then they’ll go through a formal removal of the physician from the residency program. Generally, there’s a committee that must vote to remove the person. Then the resident would have an opportunity to address the committee. But it certainly can happen. I guess one more thing that could happen is, as I stated earlier, if there was issue that required a brief period away from the training program, the residency can just be extended for whatever amount that they missed. And in that scenario, that’s great. I mean, obviously, a physician wants to get through residency as quickly as possible.

However, if it is extended, no big deal, they could still get through it, find a new job, no harm. So, can a resident physician be fired from their program? Yes, for several reasons.

How a Nurse Should Handle an Employer Investigation

Can an Employer Just Terminate Your Contract?
Scroll to top