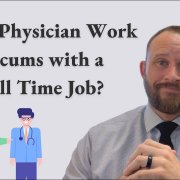 Can a physician work locums with a full-time job? The answer to that is, yes, but it’s going to depend upon the wording in the contract. Most employment contracts will contain language about either exclusivity or many times, it’s also called outside activities. And in those sections, it will state that the physician can only work and provide physician services to that employer unless the employer gives them specific written approval to pursue another job opportunity on their off time. This is specialty-dependent, but it is possible, but you can’t just do it on your own normally. Now, people who do shift work like ED, hospitalists, maybe some people who are doing critical care and they’re only working a certain number of shifts per month.

And then they have 12 to 16 shifts as a normal range for most people who are doing those types of shifts. So, they have plenty of time to do locums work if they want. They could go to another hospital and staff that ED or do hospital work in the other hospital as well. Most employers don’t want them doing locums work for direct competitors. In any normal situation, the physician would then say to the employer, I have an opportunity to take a locums contract with this specific employer in this specific place, I would like your written approval. And then normally, the employer is not going to withhold that approval if it’s a reasonable request. As I said before, if it’s: hey, I want to work across the street with your direct competitor three times a month, it’s probably unlikely that the employer is going to be okay with that.

There are also some considerations in what’s the non-compete. There are many contracts that prohibit not only competition after the contract ends, but during the contract as well. So, can physicians work locums with a full-time job? Absolutely, but it’s specialty dependent and they need to get written approval to do so. I have had people say, well, do I really have to do this? And then what are the repercussions if I do this without seeking approval first? Well, if it’s in the contract and it states you need to do this, meaning, get approval to work in any kind of outside employment, and you don’t do that, then it’s a breach of contract. The employer can say, look, you signed an agreement that said you had to do this, and you didn’t do it.

You’re a breach of contract and we’re going to terminate you for cause. That’s one repercussion. Why do employers do this? Well, beyond the competition portion of it, they will also generally require that the physician provide proof of malpractice insurance. A malpractice policy only covers the physician services for a specific employer. Just because the physician has a malpractice policy with their employer doesn’t mean that it covers them for doing services for another employer. Normally, their current employer would state, yes, you can do this job, but you must provide us with proof that you have a malpractice policy that covers your services provided for them for a period. So, yes, you can work as a locum, but you need approval for the most part. Other blogs of interest include:

When I am reviewing a contract for a physician, many times they’ll bring up, okay, well, what are industry standard numbers? And then how do we find them out? One tool that I think is very helpful is the MGMA physician compensation data and I’ll kind of go through what it includes and how I use it. First, the MGMA is the medical group management association. It’s an association for professionals that manage or assist with physician practices, and then each year, they will do a survey of physicians by specialty, which gathers a lot of information about how they’re compensated. What goes into the numbers?

First, they’ll do total compensation of what’s an average salary for a physician in a specialty, RVUs, what are the total RVUs generated in that specialty, what’s the average compensation factor, I’ll get into the specifics of that in a second, and then lastly, what are the average net collections for a physician in that specialty as well. And I kind of break down each one and then how I use it. If a physician is given a contract that just has a base salary, no productivity at all, then it’s helpful to investigate the MGMA numbers and see what’s the normal amount for a physician in that specialty, in that area. The MGMA numbers are broken down by region. You have Eastern, Midwest, Southern, and Western. It’s also broken down into a physician-owned practice versus a hospital/healthcare network as well, because those numbers can fluctuate dramatically.

Once we get into those numbers and see what the average is, it’s a helpful tool. Should it be the only thing relied upon? Absolutely not. I think it’s a terrible idea for a physician to base whether a job is worth pursuing or not just based upon compensation. You have several other factors. What are the benefits? What’s the non-compete like? Is it easy to get out of the contract if things go south? What’s the non-solicit? Do they pay tail insurance? It’s not just compensation, it’s kind of the totality of things, but certainly the compensation is kind of the wow factor numbers and it’s probably the first thing that a physician thinks about in determining whether a job is good or not.

Getting back to, if they just have a base offer, we can look at those numbers and see if it’s industry standard. I would also suggest for any physician to talk to colleagues, see what offers they’re getting, especially for people in residency. Comparing offers is I think the best way of utilizing whether an offer that you’re getting is fair or not. Next, let’s talk about collections. If a physician is given a contract that’s just based upon net collections, what that means is every dollar that the practice receives, the physician gets a percentage of, usually somewhere between 35% to 45%. In this case, let’s just say someone has a 40% net collection Each month, whatever they collect, they get 40% of that.

And it’s simple. How the MGMA data is helpful is knowing what the average collections are annually for a specific specialty. In that way, the physician can at least kind of forecast what they’re going to make. Now, obviously, its volume-dependent upon the practice, how efficient they are in billing and collecting. But having these numbers certainly is a good base point. Another way of being compensated is via RVUs. Just talking about the collections quick. I find that physician practices utilize net collections-based models, and then hospitals use RVUs. It would be very rare that you’d see a private physician in practice to use RVUs. And then, alternatively, it also would be very rare to have a hospital use net collections, that just doesn’t happen very often. In this case, if they have an RVU contract, I mean there are different hybrid models.

They’ll say, alright, if you generate anything between 5,000 to 6,000 RVUs, you’ll get $50, and then anything from 6,000 to 7,000, you get $10 above that or $5 above. That’s a normal way of doing it. That’s why this data is so helpful. Now, the downsize, in some specialties, the sample size is so low that it can’t really be relied upon or isn’t statistically significant. When you get into the real subspecialties that took three or fellowships to get into and there just aren’t that many of them out in the country, it’s just difficult to have a lot of people respond to the survey and therefore some of the numbers provided, I don’t think can be completely relied upon. It’s a great tool. Is it the only tool? No, other places have Merritt Hawkins, it’s another one that provides data. Another question I get regularly is, how can I see this data?

Well, it’s tough. There may be some MGMA data online that’s old that you can find just by Googling around, but it would be virtually impossible to find the most current MGMA data online for free. I mean, we must pay for it every year. Just Google around for media compensation and try to find some numbers, but I think these are probably the most accurate numbers that we can get. But like I said, they’re not the only number. So, hopefully, that was a real brief rundown of what is the MGMA physician compensation data, and how it can assist in negotiating the contract.

What’s the difference between an offer letter and an actual employment contract and then, is the offer letter binding? Some employers will ask that the physician sign an offer letter and the offer letter dictates basic terms of the agreement. Generally, salary, any other kind of compensation, signing bonuses, relocation assistance, maybe getting into the benefits of PTO, what they’ll pay for as far as dues and fees, maybe what the basic terms of the non-compete are, very base level things like your PTO will be 30 days or your base compensation in year one will be $300,000. Many physicians don’t want to go through the hassle or expense of drafting an employment agreement if they can’t at least come to terms on the basic level of what will be in the employment agreement itself.

If the offer letter says it’s one year and five miles, then when you get into the agreement, when you get into the details, it’s one year, but then it’s five miles from every single facility that a healthcare network owns. One location for five miles is usually reasonable. 100 locations for five miles obviously is not. And that itself could be, for a physician, an absolute no, I’m not signing this agreement. It has this. Or maybe if someone’s on a net collection-based compensation structure for a contract and in the offer letter it says, you’ll get 40% of all net collections, but then in the actual agreement, it’ll say, when the contract terminates, you won’t get any collections after that. The physician in that scenario would be essentially working for free for the last three months because they wouldn’t get anything that they produced and collected after the contract ends.

And that can be an absolute no, I’m not signing this. So, in short, no, the offer letter is not binding. Things can absolutely change from the offer letter into the details of the actual employment agreement. And it is well within the rights of the physician, after reviewing the details of the employment agreement to tell the employer, I’m not going through or at least negotiating some changes to make it palatable to them and saying, although I signed the offer letter, I understand that, but I’m not signing this agreement. And there’s not much the employer can do about that.

What is the Stark Law Recruitment Exception?

How Does a Physician Income Guarantee Work?
Scroll to top