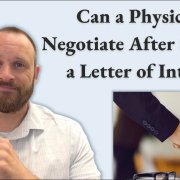 Can a physician negotiate after signing a letter of intent?  A letter of intent is also known as an offer letter. The normal recruitment process would be close to the end of their residency or fellowship. And then most people find a job through one of three ways: either a word of mouth amongst colleagues or mentors, a physician recruiter can reach out to them and say, hey, here’s a position that might fit your needs, and then initiate the process that way, or the physician can always find job opportunities through job listings on the internet. Once the process has been initiated and the physician is discussing with the physician recruiter, the terms of the relationship, salary, bonus opportunity, locations, that type of thing, at that point, many employers will then ask the physician to sign the letter of intent.

The letter of intent is just kind of the basic structure of the employment relationship: start date, location, length of the contract, which is known as the term, how the contract can be terminated, compensation, so what’s the base salary? Is it RVU production? What are the thresholds? Is it a collection? What’s the net collection percentage? And then, the restrictive covenants, non-solicit, what are the terms of the non-compete? and then usually, the basic benefits, so what do they offer in terms of health, vision, dental, life, disability, retirement? What does the employer pay for as far as continuing medical education, licensing fees, DEA registration, association, societies? Just basic things. These are all the things we’re going to provide to you. Now, some offer letters are more detailed than others, but if a physician is okay with the general terms of the offer letter, then the employer is going to say, we need you to sign the offer letter. And then at that point, we will then get the employment agreement drafted, and then they’ll offer the physician the employment agreement. Is the offer letter or letter of intent binding? Well, the answer is no, unless there’s language in there that says it is binding. It’s very rare that you would find a letter of intent that states this is a binding document, and it doesn’t make sense for a physician to sign that under any scenario for a couple of reasons.

Basic terms in an offer letter with either no context or no other explanation can change substantially once we are able to see the actual language of the employment agreement. Maybe they will state in the offer letter, there is a non-compete, but there’s no description of it. Well, maybe you read the employment agreement and you’re expecting a one-year non-compete and they say it’s three years, or you’re expecting a 10-mile restriction geographically but it’s 50, right? Kind of the initial offer letter may look like, okay, a non-compete, well, that’s expected for a physician. But once you read the actual terms, it goes from being reasonable and okay to being completely unreasonable. In that scenario, although the physician signed the offer letter, they absolutely do not need to go through with signing the employment agreement. Other blogs of interest include:

And then, I would also suggest, even though the physician has come to terms with the offer letter, it doesn’t stop them from renegotiating the terms prior to signing the employment agreement. As I said before, once the actual language of the contract is reviewed, it can completely change someone’s perception of a job. So maybe, okay, I’m willing to make a smaller base salary if the non-compete is not as restrictive when I leave, or let’s say you have a claims-made malpractice policy and the employer is saying, we will pay for your tail insurance once you leave. Well, maybe they would be willing to accept a smaller base because the employer will pay tail, and then when you look and you get the actual employment agreement, the language states the employee must cover their tail.

Maybe depending upon specialty, that could be a significant amount of money. And then the physician may say, well, I had no idea I had to pay a $50,000 tail. Therefore, I want a larger base salary to offset that. So, even after the physician signs the letter of intent, they certainly can continue negotiating once they see the actual terms of the employment agreement. Now, a couple of considerations: it’s not bad form to go back and renegotiate terms. However, some employers may get ticked off when the physician agrees to the offer letter terms and then comes back again to renegotiate those terms. It can be off-putting to some employers. However, if the physician frames it in, well, you said that I would have this, and I expected this to be kind of industry-standard but once I saw the language, it wasn’t.

For instance, let’s say there’s normally 60 to 90 days without cause termination. Meaning, either party can terminate the agreement for any reason, with a certain amount of notice to the other. So, they’re expecting a 60-day without cause termination notice. And then the employer says, you have to give us a one-year notice. Well, that’s insane! No physician should agree to that. And they absolutely should renegotiate the terms once they see the actual language in the employment agreement. No physician should sign a contract that they’re either unwilling to meet the terms or are significantly unhappy with prior to starting the job. There will always be push and pull when it comes to a contract. There is no perfect contract. It doesn’t exist. There will be things that the physician has to relent on that maybe they’re unhappy with.

And maybe the employer has to relent as well as far as compensation goes or having to pay tail, or any of the things I’ve already discussed. But, if both sides feel relatively bad about the agreement, it usually means it was a fair negotiation. If one side is super happy, it usually means the other side is not. So, don’t sign an offer letter if you’re not happy with the terms. But even if you do sign an offer letter that you’re okay with doesn’t mean you can’t renegotiate the terms after the fact. Now, it’s possible you’d lose out on an opportunity if you did that. An employer could theoretically pull a job offer. But in that scenario, I just don’t think it’s worth moving forward just because you don’t want to tick off an employer. It doesn’t make sense.

Negotiation of an Offer Letter in an Agreement

Can you reject a letter of intent?  The quick answer is yes, you certainly can, and should, if you’re unhappy with the terms of it. A letter of intent, also known as an offer letter, can be provided once negotiations or discussions about a position move forward in the process. Normally, how it would work is if a potential candidate would find out about a job, either through a job listing or word of mouth, or maybe they were reached out through a recruiter, there’s a discussion of the main point to the position like the salary, benefits, that type of thing, location. And once there’s interest on both sides, many employers will then offer the letter of intent or the offer letter.

And that is a description of the main points of the employment relationship. In most offer letters, there will be the start date, location, length of the contract, which is called the term, maybe a brief discussion on how the contract can be terminated, compensation, so is there a base salary? Are there bonus opportunities? Is it net collections, commission based, RVUs? It would be a brief description. It wouldn’t go into a long four paragraphs about comp. If malpractice insurance is necessary, who pays for that, and then who pays for the tail insurance if that’s necessary as well? Are there restrictive covenants? The restrictive covenants are normally a non-disparagement, a non-solicit, a non-compete and it might go through briefly like this is how long go last.

What is Mediation in a Physician Contract?

Can You Reject a Letter of Intent?
Scroll to top